Hanging out with Lightning McQueen.

She was voiced by legendary Bonnie Hunt who as voiced other Pixar charecters like Rosie, Ms. Flint, Dolly and Karen Graves.

Sally is the town attorney of Radiator Springs. She and Lightning are in love with each other for most of the film. She always calls Lightning "Stickers" because Lightning's headlights are really stickers.

"Sally grew tired of her life in the fast lane as a high-powered attorney in Los Angeles and made a new start in the small town of Radiator Springs. Charming, intelligent, and witty, she became the town attorney and the car most dedicated to preserving the town's historical beauty. She bought the Cozy Cone Motel and restored it back to its original condition and has no plans of stopping there. She'd fix the whole town building by building if that's what it took."

"Sally's tattoo pinstriping is left over from her early days. Though she's a little embarrassed by it now, it serves as a reminder of her high-speed life in California and how happy she is to be cruising in the slow lane."

At the end of the film, Sally becomes Lightning's girlfriend.

Sally has a smaller role in the sequel. She is the proprietor of Radiator Springs' Cozy Cone and Wheel Wagon Motels and the apple of Lightning McQueen's eye. Longing for Lightning’s return from his latest Piston Cup race season, Sally is looking forward to a long drive with "Stickers," as she affectionately calls Lightning.

When Lightning commits to racing in the World Grand Prix the same night of his return, Sally remains steadfastly supportive of her star racecar. She even convinces Lightning to take his best friend Mater along for the ride of a lifetime. Though Sally stays behind in Radiator Springs, even she lights up for the open-wheeled racing cars from Europe – but only Lightning truly makes her motor purr.

In the film, Sally greets Lightning when he arrives. The two then go on a date later that evening. When Mater comes, she and Lightning jokingly tell Mater that they will have their regular order. She also remarks about liking Francesco Bernoulli's open wheels. When Lightning decides to go to the World Grand Prix she suggests that Lightning bring Mater along with him, and he reluctantly agrees. Later in Tokyo she is mentioned as Francesco and Lightning make a toast to her. She is seen at the London race and also tells Mater about Lightning calling her and the rest of Radiator Springs. Sally later fights the Lemons with Red's help. At the end during the Radiator Springs race she talks with Lightning before he introduces her to Francesco Bernoulli. She and Flo later comment about Francesco's open tires.

"Don't you big city racecars ever just take a drive?" 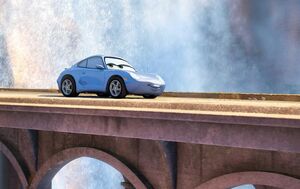 Sally by the waterfall

"Good luck in California. I hope you find what you're looking for."

"Best for everyone...or best for you?"

Sally watches the race on TV

Sally with Red as he sprays the evil Lemons. 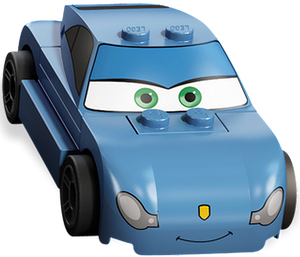 Retrieved from "https://hero.fandom.com/wiki/Sally_Carrera?oldid=1964220"
Community content is available under CC-BY-SA unless otherwise noted.