Salon Maiden Anabel is a supporting heroine in Pokémon series.

Anabel is tomboyish person with the short hair that is colored purple.

In Sun and Moon, she wears an agent uniform that is colored black. She has now a long, purple hair.

Anabel is a calm person. In Generation VII, she lost her memory, because she is amnesiac.

Anabel first appeared in Pokémon Emerald Version. When defeated, she awards the Ability Symbol onto the Frontier Pass. On the second match, Anabel commends the player's progress and is grateful for the chance to battle without holding anything back, to battle to her fullest. She is one of the two known Tower Tycoons, the other one being Palmer of the Battle Tower in the Sinnoh region.

Anabel returned in Pokémon Sun and Moon, along with Looker. She heard the story about he incident of the Ultra Beast in the Alola Region caused by Lusamine. After the story was done, she challenged a player to short fight.

Anabel appears during the episode's "Talking a Good Game" and "Second Time's the Charm". This version of the character is vastly different from the games version. In the anime, Anabel is the second strongest frontier brain. She possesses a unique ability to connect with Pokémon on an emotional level, being able to sense their feelings and telepathically communicate with them during battle.

In her first appearance, Anabel stops an angry Beedrill from attacking Ash and his Pikachu when they are out getting exercise by a lake. Using her ability to communicate with Pokémon, she manages to calm the Beedrill down revealing that it was only protecting its nest which was hidden under a tree. After this she quickly makes friends with Pikachu and explains her ability to Ash, to which he is very impressed with. However, before she can introduce herself to them, a Gyarados suddenly appears and attacks. Once again Anabel uses her ability to calm the Pokémon down before removing a stick stuck in its side, which was the chase of its rampage. She and Ash then sit by the lake, where she communicates with Pikachu and becomes amazed the strong bond that the two share. 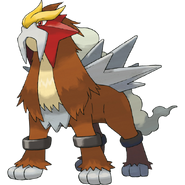 Anabel first met Ash when he and his Pikachu were being attacked Beedrill. Although she didn't even know Ash at the time, she came to his aid and used her ability to connect with Pokémon in order to calm the Beedrill down. Ash was astounded by Anabel's ability to connect with Pokémon and was thankful for her protecting him and his Pikachu. After introducing himself to her, she tried to do the same but was interrupted by a Gyarados that suddenly appeared from the lake. Once again Anabel used her ability to calm the rampaging Pokémon, leaving Ash even more astounded. The two then became fast friends. However, since Anabel did not reveal her name, Ash mistook her for a boy. Sitting by the lake, Anabel learned more about Ash from Pikachu and was astounded by the unusually strong bond the young trainer possessed with his Pokémon. When Pikachu and Anabel (unintentionally) were caught by Team Rocket, Ash quickly rescued them and even jumped into the lake to help them. In turn, despite only just meeting him, Anabel showed concern for Ash when he was injured and two showed great teamwork in battle. Anabel's trust for Ash and his friends was strong enough that she invited them over to her house to rest and relax. It was there that Ash learned, to his shock, that Anabel was actually a girl. While having tea, Anabel voiced her respect for Ash, impressed with how he risked his own life to save Pikachu; a feat she says most trainers wouldn't do.

Anabel first met Pikachu when she saved him and Ash from a Beedrill they accidentally upsetted. Naturally, due to her ability to connect with Pokémon, Anabel became fast friends with Pikachu. It was from Pikachu that Anabel learned more about Ash. She was amazed by the unusually strong bond the Pokémon had with his trainer. When Anabel and Pikachu were caught by Team Rocket she was protective of Pikachu and promised to not let anything happen to him. Anabel was later impressed by Pikachu's power and strength upon seeing him use thunderbolt to blast Team Rocket away. Like many other characters in the anime, Anabel finds Pikachu to be very cute. In turn, Pikachu considers Anabel to be a good friend.

Retrieved from "https://hero.fandom.com/wiki/Salon_Maiden_Anabel?oldid=1911133"
Community content is available under CC-BY-SA unless otherwise noted.