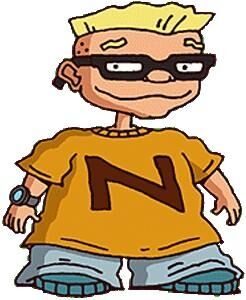 Sam "Squid" Dullard is one of the supporting protagonists of the Nickelodeon animated series Rocket Power. Sam is the smart and the intelligent kid of Otto Rocket's group and also as a "rock-solid" goalie when they play hockey. He is introduced in the first episode, where he and his divorced mother Paula moved to the only vacant house in the cul-de-sac.

He was voiced by Gary LeRoi Gray.

Sam is a young boy with short blond hair, and wears a prominent eyeglasses, orange shirt with a dark red N on it, blue-gray pants and teal shoes.

Sam is the conscience and common sense for the group. His fears and intelligence keep the other kids out of serious danger. Squid was the least athletic of the group, but developed an expert level of surfing and decent abilities in other sports.