Sam is one of the two main protagonists of the Sam and Max franchise, the other being Max. He is an anthropomorphic 6 ft tall dog who stops evil where ever he and his partner Max go. He and Max would also help their friends such as Sybil, Bosco, and Flint Paper in their cases. His most noticeable appearances is the Sam and Max game series from Telltale Games.

Sam wears a gray suit with a matching fedora and a black and blue necktie.

A warped sense of justice makes Sam the more passionate of the pair for their police work, only held back from taking his job seriously by Max. Nevertheless, he enjoys the mannerisms and dress that come with their line of work. Sam possesses near encyclopedic amounts of knowledge, particularly on obscure topics, and is prone to long-winded sentences filled with elaborate terminology.

Although he is always keen to display this information—regardless of its accuracy—Sam can be capable of total ignorance towards more practical matters; for instance, despite his regard for his DeSoto Adventurer, he is severely negligent with the car's maintenance. Sam still retains various canine qualities: he is calm, kind, excitable, enthusiastic but also susceptible to emotions of embarrassment and guilt.

Nevertheless, Sam is "not above sticking his head out is one of the two titular characters of the the breeze". Sam rarely loses his temper, and is.

A member of the Freelance Police, Sam comes off as more level headed and less violent than his partner Max, albeit not by much. He typically wears a grayish film noir-styled suit, with a hat and a blue and black striped tie and also goes barefoot. In the games, he has a tendency to take everything he sees, and apparently keeps the items in a cardboard box that he carries inside his coat.

Sam is prone to long-winded sentences filled with elaborate terminology. He rarely loses his temper and is able to react to panic-inducing situations with extreme calm. When he does get angry, however, he tends to react in an uncharacteristically savage manner. In Sam & Max Season Three, Sam shows his more violent manner of investigating then the previous episodes, which include from beating a gorilla for showing a dog sign, to using a gun on a COPS member. It is usually, and somewhat ironically, Max that calms him down and prevents him from acting upon his anger.

He also has a very large sweet tooth, as during many of his adventures and assignments he can be seen enjoying a multitude of frozen treats such as popsicles and ice cream sandwiches, especially in the comics. In Sam & Max Season Two|Sam & Max Season Two he becomes self-conscious about his weight, particularly when seeing his future and past selves.

Sam carries around a Smith & Wesson Model 29 .44 Magnum revolver. It's incredible size lends it to "droop" while being held. In the comics, he is quick to use it but is a very lousy shot. In the |Telltale episodes he can hit any object on the first shot but is very reluctant to use it against living things, even villains. The gun is absent in the other incarnations.

Although most of the time he acts like a human, Sam sometimes behaves like a dog. He has growled several times in the Telltale games, and his sobbing in Sam & Max Hit the Road sounded like whining. He seems to have an enhanced sense of smell; he was able to smell where Max parked the car in Monkeys Violating the Heavenly Temple, and located the cereal aisle in Beast from the Cereal Aisle and the concession stand in Night of the Cringing Wildebeest by their non-food scents. He has also been shown to enjoy dog treats. It has been speculated that he is some sort of Irish Wolfhound.

Sam has been addressed as Samuel thrice, by Bosco in Situation: Comedy, The Mole, the Mob, and the Meatball, and Max in Bright Side of the Moon. Presumably, this is his real name.

Sam is a 6-foot-tall brown anthropomorphic dog. His eyes are only pupils, with a cartoony design further accentuated by his long drooping dog ears and his hands with only 4 fingers including thumb. He wears a noir-ish grey hat (said to be a fedora) with a wide brim with a black band at the base and grey suit. In his suit is a collared white shirt and sometimes a belt. He also wears a black and blue striped neck-tie that runs down to his grey pants. He wears no shoes on his 3 toed feet.

Sam is calm, silly, fatherly, protective, brave, loyal, generous, kind, keen, helpful, honest, reckless, sensitive, strict, smart, and wise, but rarely short-tempered. Despite being seen as the more level-headed of the titular duo, Sam does have moments where he shows that in reality, he can be almost or just as violent as Max. In They Stole Max's Brain!, he seemingly snaps and goes into a "noir" state, and remains that way until he sees that Max's brain is still intact. "Noir" Sam is practically as violent as Max is, and is prone to metaphorical spiels much like film-noir detectives, hence his fan-given alias.

Max is Sam's long-time partner, best friend, and sidekick. They met as children and attended junior-high together before becoming the Freelance Police. In most situations, Sam tends to play the straight man against Max's chaotic behavior. Sam is incredibly close to Max and will become tangibly uncomfortable when separated from him for any reason; he is willing to delve into great lengths to protect his little buddy. Unlike most people, Sam seems to admire Max's violent tendencies, for the most part.

Sam seems to be on friendly terms with Bosco. Sam does his best to help Bosco out when it is relevant to a case, but otherwise he enjoys poking fun at Bosco and targeting his paranoia for his own amusement.

Alongside Max, Sam serves as a questionable father figure role to the Geek. They seem to get along fairly well, oftentimes with The Geek being the more responsible of the two. The Geek seems to care about both Sam and Max quite a lot for taking her in, despite having to clean up after them almost constantly.

Sam and Max first met Stinky in Season 2. Neither Sam nor Max seem to care much for her dismissive attitude, and the fact that she refuses to call them by their real names. At first they thought Stinky killed Grandpa Stinky but turns out it was all a misunderstanding. In Beyond the Alley of the Dolls, Sam plays along with Girl Stinky's lie to possibly get more information from her. He pretends to have been secretly dating her, and Stinky kisses him to make the story convincing. Sam did not seem to enjoy this experience, as it was followed by a lengthy awkward pause. Max expressed how this experience "made him wish for the sweet release of death."

Much like Max, Sam seems to tolerate Jimmy Two-teeth for the most part. They allow him to share their residence, but aren't afraid to get violent with him when there's a disagreement or they need something from him (i.e. the office phone in Culture Shock, or coins in Reality 2.0)

Sam seems to be a good friend of Sybil's, with her expressing her trust in the duo several times. While Sybil's opinion of Max is understandably iffy, she seems to have a good opinion of Sam. This does not mean that Sam is immune to annoying Sybil, however, which he has proven several times to be quite good at.

Over the course of Season 3, Sam and Sal develop friendship.

As his short-term co-star on Midtown Cowboys, Sam did not seem to get too well acquainted with the overall uptight chicken.

Both Sam and Max appear to have known Grandpa Stinky since they were pre-teens (evidenced in Season 2, Moai Better Blues.) and have frequented his diner. The tradition continuing till present day. All the while Grandpa Stinky remains with the same snarky attitude towards them.

Sam admires his grandmother greatly. In the animated series, he mentions her often and values gifted from her, such as a bazooka she once gave him (seen in the last episode, The Final Episode, of the show.)

In Sam & Max The Devil's Playhouse Episode 4 Beyond the Alley of the Dolls, after seeing Momma Bosco's future from Max's Future Vision Goggles, when Max reads Sam's mind he hears him say that now Momma Bosco's corporeal again, maybe he'll ask her out. Momma Bosco also when viewing the Samulacra or Dogglegangers, seemed to react positively to the clones wearing only the gold shorts saying "Mm-Mm! Those sure don't leave much to the imagination." Sam appeared conflicted to this remark.

Sam is on good terms with the noir detective Flint Paper, being a fellow detective that lives in the office next to him. Sam doesn't mind Flint's violent behaviors (presumably because of his partners violent tendencies) treating him as an equal and even taking a thing or two out of Flint's book in telltale season three when Max's brain gets stolen.

Sam is on good terms with Agent Superball, though Superball's unreadable expressions and business centered focus on serving the president (Max) and state makes it hard to really understand what Superball thinks of him. However, in the final episode of Sam & Max: The Devil's Playhouse, Superball does appear to think highly of him, believing that Sam will fix everything.

Sam appears to be annoyed by Lorne and will try to get him to leave whenever he shows up. Sam acts less hostile towards Lorne than Max does, but still holds an obvious distaste for him.

The Player (aka Lumpy)

Sam acts as a mentor and father figure to the player. 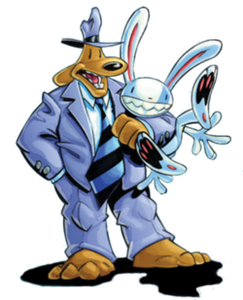 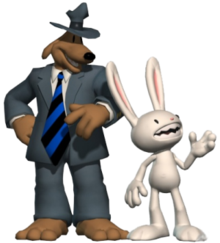 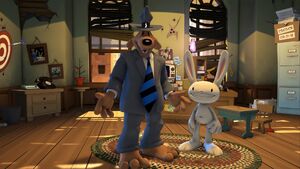