Win Dakota's heart (succeeded)
Try to get mutated by the toxic waste that Chris dumped last season, become a mutant like his girlfriend (failed)
Be prepared for exile duty (succeeded)
Win the one million dollar prize money (failed)

Sam is the video game-addicted camper in the Total Drama series. He meets Dakota because of their shares of technologies. After Dakota turn into Dakotazoid, he became her boyfriend. He will be in Total Drama: All-Stars and he is a supporting protagonist.

He was voiced by Brian Froud (who also voiced Harold in the same series).

Sam is addicted to video games and his GameGuy. In fact, his first ever appearance in the series involves him playing on his console, excited about an upgrade.Sam is a nice, optimistic guy who is easy to get along with and not hesitant to give compliments, and even though he has bad luck, he wants to help his team win and be useful to them. He tends to use language and terms related to video games, such as when he calls his teammates "expert level awesome" in Saving Private Leechball. He also says he needs a "power up" or "power levels low" whenever he's tired and low on energy. Whenever deprived of games, Sam will often hallucinate real life as being parts of a game, seeing the world as pixelated game sprites. In Total Drama: Revenge of the Island, he develops a crush on Dakota and is sad when she is eliminated early on, stating that he was looking forward to flirting with her and being rejected all season. When she returns and is made an intern, his kind nature allows him to break through to Dakota, becoming her only real friend. Even when she suffers a great misfortune, Sam continues to harbor feelings for her, finding her even more interesting than before.

Sam debuts in Bigger! Badder! Brutal-er!, not having high expectations of himself; stating in his first confessional that he hopes to not be the first person to be eliminated, but wouldn't mind being the sixth or seventh at least. He is placed on the Toxic Rats, and is seen playing his portable console throughout the episode, though he does somewhat contribute to the challenge. His game consoles are confiscated from his possession in the next episode, as it is against the rules to bring any form of technology to the island. He soon develops a crush on his teammate Dakota (who just had her phones taken away from her), though he knows fully well that she will reject him entirely, and that she is out of his league. He tries to start a conversation with her, only for her to feel a little insulted when he compares her with him. When Scott suggests that the team should vote off Dakota, Sam is the only person to defend her and is noticeably saddened when Dakota is sent to the Hurl of Shame.

Sam appears to be more focused on his team and challenges in Ice Ice Baby. However, his attempts to be useful to the team are backfired throughout the episode, resulting in him to be comically injured. When he tries to distract a mutant beetle by playing a recorder, it ends up attacking him. For the next challenge, he and Lightning are sent to capture the opposing team's flag. En route, Sam falls into a hole on the ice and remain frozen for the remainder of the challenge. That night, Dakota returns to the island via hang glider and crashes into Sam, who is happy to see his crush has returned. In Finders Creepers, Sam and Scott are the only members of their team remaining and he becomes determined to win for his team, despite Scott insisting that they should give up. Even after the giant spider ties the two of them with its webbing, Sam continues to crawl to the finish line, earning his team their first win of the season. While he tries to be a contributing member of the team in Backstabbers Ahoy!, he is shot in the back by Scott during the second challenge in an effort to make their team lose again.

Sam's usefulness is put to a focal point by his team in Runaway Model, where he attempts to join in on his team's circle of trust, only to be rejected when the others are disturbed by his "circus thumb". He tries to prove himself to the team, by removing the cheese from a mouse trap, only to fall into all of the traps. During the challenge, Sam is not impressed with his teammate idea and goes to Dakota for fashion advice and she tells him a secret: stripes. Sam takes her advice and adds a vertical stripe T-shirt among Brick's duffel bomb. The team tries to useSasquatchanakwa as their model but the beast went amok when he realizes the shirt Sam added made him look fat, as Dakota meant horizontal stripes. The insecure Sasquatchanakwa begins trashing the stage before taking the boat to Boney Island with Lindsay. En route to Boney Island, Sam begins to suffer from video game withdrawal, and sees things like they are in a digitized video game. As the "last life" of his team, he goes to save Lindsay from Sasquatchanakwa, climbing the scaffolding with ease while dodging Sasquatchanakwa's attacks. However, the moment he reaches the top, Sam has become too tired and is thrown off the scaffolding, losing the challenge. Sam is eliminated, and receives a warm goodbye from Brick. As Sam is about to take the Hurl of Shame, Dakota runs up to him and gives him her number, which quickly ends up back in her hands after Sam is catapulted off the island after he drops it by mistake.

Sam is brought back to the show and is buried somewhere on the island alongside former contestant, Gwen for the second part of the challenge as an incentive to complete it. He is eventually rescued by Dakota (who is now mutated into a gigantic mutant monster). However, he does not seem to mind her new form, thinking she is even cooler than before. At the elimination ceremony, Sam compliments Dakota's new appearance, and the two begin to make out, disgusting the Mutant Maggots. They continue to make out, even after Dakota is eliminated from the competition, and as they take the Hurl of Shame together.

Sam returns for the finale, where he reluctantly supports Lightning, after being forced to by Chris. As the final challenge progresses, Sam begins to fully root for Cameron after believing him to be the underdog. When the mutant animals attack the cast, Sam is crushed between the Mutant Turtle's legs, while Dakota tries to save him. He is later ecstatic when Cameron wins. At the end of the episode, Cameron (in his ending) decides to spend the money on all the other contestants, exciting Sam, who plans to buy the world's largest television, and every video game known to man. He then leaves the island along with the other contestants and Chef, while Chris gets arrested. In Lightning's ending, he is disappointed that he won and not Cameron.

In the hopes of becoming of a mutant like his girlfriend, Dakota, Sam returns for the new season only to find out that Camp Wawanakwa had been cleansed since the previous season. Sam is placed on the Heroic Hamsters, along with Courtney, Sierra, Mike, Zoey, Lindsay, andCameron. Misfortune favors Sam throughout the season, and he is often attacked by animals. He is brutally attacked by Fang and two other sharks in Heroes vs. Villains, resulting in him getting injured. As a result of a mosquito draining most of his blood in the beginning of Evil Dread, Sam becomes lightheaded and is unable to focus on the challenge. He also triggers many booby traps; one hitting him in the groin, and another throwing him into the lake where he gets stung by jellyfish. Despite his lack of participation, Sam's team wins and he volunteers to go to Boney Island for exile because of his lack of contribution.

In Saving Private Leechball, Sam realizes that going to Boney Island was a bad idea, as he is attacked by several bears and starves the whole night. When he returns the next morning, his teammates (sans Courtney) give him food taken from the hotel. Still injured and tired, Mike and Sierra carry Sam and hide him in a cave so he can rest, with Courtney volunteering to take care of him. When Jofinds them, Courtney uses him as a human shield to protect herself. That night, Sam is depressed after discovering that his gaming console was mysteriously broken by someone. Unknown to him and his team, the culprit was actually Mike's evil personality, Mal.

In Food Fright, Sam and the Hamsters hold a party to welcome Duncan into their team. During the challenge, Sam is filled with the motivation to win, and has Zoey switch places so that he can compete against Alejandro. When Alejandro insults him, calling him "Game-child", Sam gains a sudden boost in adrenaline and finishes the course first, winning for the Heroic Hamsters. As he taunts the Villainous Vultures for their loss, Chris overrules the Hamsters' victory and orders Sam to empty his pockets. Much to his team's surprise, Sam is revealed to have hid some pancake pieces from the challenge in his shorts, afraid that he might be exiled again. Because the Heroic Hamsters did not complete the challenge, the Vultures are declared the winners and Sam is eliminated. As Sam takes the Flush of Shame, the giant toilet suffers plumbing problems and he is not completely flushed until Chef Hatchet unclogs him with a giant plunger. In the exclusive clip, Sam ends up in the sewers and begins to suffer from video game withdrawal again, seeing the entire area around him as if he is in a video game.

In The Final Wreck-ening, Sam appears in one of the balloons along with the other eliminated contestants. However, he floats away with the others before an intern can get him down. 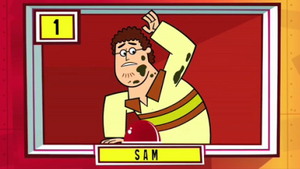 Sam appears in Skatoony in the episode Freakshow. 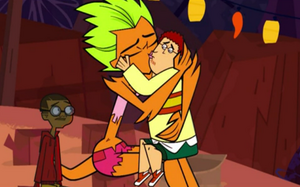 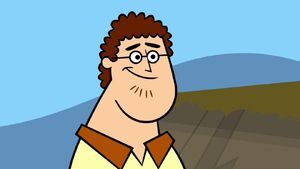 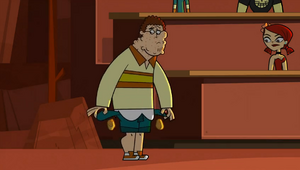 It's revealed that Sam cheated, instead of finishing the challenge.