Support himself and Nathan (formerly)

Samuel Morgan (better known as Samuel Drake or simply Sam) is the deuteragonist of Uncharted 4: A Thief's End and a tritagonist in Uncharted: The Lost Legacy.

The brother of infamous treasure hunter Nathan Drake, Sam was presumed killed during an unfortunate prison break. He returned 15 years later asking for the instance from his retired brother as he was in trouble.

Samuel Morgan was born in the 1970s to his mother Cassandra Morgan, an unnamed father and had a little brother, Nathan.

Eventually, Cassandra had a terminal illness and committed suicide where the father admitted Samuel and Nathan to the Saint Francis Boys' Home

At the age of 18, Sam had a paying job and was relieved from the orphanage though Nathan was underage and couldn't leave, however this didn't stop Sam from meeting with Nathan time to time. Eventually Sam got a job that would take him out of the state and feeling bad, decides to show Nathan his newly-bought bike and their mothers old research at an estate across town.

After escaping from the police, Nate realized that they couldn't go back to their lives. Sam suggested that they leave their old lives and start new ones with new identities. In honor of their mother's belief that Sir Francis Drake had heirs, he and Nate adopt "Drake" as their surname. Sam believed that both he and Nate were destined to do great things, though he initially didn't know exactly what. He decides to dedicate his life to finishing his mother's work, and convinces Nate to join him.

Whilst searching Henry Avery's lost treasure, Sam and Nathan partner with the aristocrat, Rafe Adler and the corrupt guard, Vargas to break into Avery's first mate, Jonathan Burnes prison cell. As Nathan climbs the abandoned Spanish prison and finds a crucifix though hides this from Vargas, Sam is dealing with several inmates outside but breaks away with Nathan and Rafe when they learn Vargas wants a larger cut of the treasure.

They discuss the crucifix Nathan found and determine their next location for Avery's treasure is Scotland but they are ambushed by Gustavo and several other inmates that Nathan caused a fight with earlier. A brawl ensues which is broken up by Vargas, he then takes the three into his office to cut a deal. Just after reaching an agreement, Rafe murders Vargas and this forces them to escape the prison by force. The Drake's are separated from Rafe but eventually catch up, however, before Sam can escape with his brother he is shot and falls from a great height.

Unknown to Nathan and Rafe, Sam survived and was patched up by doctors only to be thrown back inside a cell for thirteen years until he was rescued by Rafe who bribed the prison warden. They spent two years tracking the second Saint Dismas cross and Avery's treasure before Sam betrayed Rafe to find his brother and hunt the treasure together.

Sam finds Nathan at his place of work early one morning, shocking and delighting his sibling. After being regaled by Nate's exploits, Sam lies and tells Nate that he's in deep trouble with his former cellmate and sadistic crime lord, Hector Alcázar, who wants half of Avery's treasure in return for breaking Sam out of jail. With a three month deadline, Sam insists that he needs his brother's help. Nate initially refuses, citing that he is retired and that Rafe has spent the last fifteen years looking and hasn't yet found it. Sam reveals that he has located the key to finding the treasure, another St Dismas cross. Nate tries to convince him to use one of his contacts, though Sam says that he only trusts Nate. Nate relents, coming out of retirement to help his brother.

To help break into a black market auction where the Saint Dismas Cross is being sold, Nathan calls his old partner and mentor, Victor Sullivan to Sam's dismay. They use the cliffside to break into the estate where Sam watches Nathan and Sullivan embrace after two years apart. However, to their surprise a mysterious buyer has made the cross the first item in the auction. The three plan to cut the power to the estate and have Sam pose as a waiter to be close enough to steal the cross.

Nathan and Samuel travail through the kitchen and air vents, avoiding numerous armed guards, and find a waiter outside which Sam knocks out and steals his uniform.

As the auction commences, Sam is disguised as a waiter as Sullivan spars with Rafe and Nathan searches for a way into the circuit breaker. The lights go out and Sam is able to successfully steal and make a clean getaway out of the auction room. However, he is eventually spotted by guards and this forces a huge firefight to ensue in the ballroom with Nathan, though with Sullivan as the getaway driver they are able to escape with the cross.

The three celebrate their victory and discover the next clue is at Avery's supposed grave in Scotland. As Nathan answers a phone call from Elena, Sullivan and Sam have a briefly tense conversation regarding his brother but this broken by Nate returning to the conversation. The three than decide to make their way to Scotland.

Out in the highlands, Sam and Nate look over their map of the area. Sully stays with his seaplane, keeping in contact via radio. As the brothers make their way towards the graveyard, they are periodically impeded by Shoreline, Nadine Ross' paramilitary organization working for Rafe. They then find Avery's grave and, noticing the skull on the tombstone resembles Avery's sigil when turned sideways, reveal a secret entrance into a crypt.

They descend and discover three statues of Jesus, the penitent thief Dismas, and the "jerk" thief Gestas. After solving a light puzzle which opens a view port, they use the markings on the glass to triangulate where to go next. In order to continue onwards, they must go back towards where Rafe has set up shop.

Slipping past Shoreline patrols and traversing the landscape, the two find a cave beneath the cathedral. Inside are more trials and dangers which they overcome. The two briefly eavesdrop on Nadine and Rafe through a crack in the wall before continuing. They soon reach a large room with a set of scales in the center, holding a jeweled cross and a pile of coins. Knowing now the puzzles they've come across were tests for past recruits, Sam picks up only one of the coins.

This triggers a sequence in which the torches in the room light up, creating a map of Madagascar and King's Bay. Nadine then enters the chamber, and Nate tricks her into picking up the cross. This sets off a trap, collapsing the floor and destabilizing the entire cave. Sam and Nate fight their way out of the cathedral and fly off with Sully.

The trio head for Madagascar, using the coin's image of a volcano — similar to one in King's Bay — to pinpoint their location.

Sam, Nathan and Sullivan rent a 4x4 and head towards the volcano. They encounter many towers and several Shoreliners, once they came close to falling off a cliff though fortunately the cable was attached to a tree and Nathan was able to gain control of the situation. The three reach another Saint Dismas statue and a map of Kings Bay which they deduce two possible towers could be the next clue to Avery's treasure. Sam goes to one and Sullivan and Nathan go to another.

However, Drake and Sullivan's towers was the correct one. The two contact Sam for help with a puzzle and Nathan finds that Avery and the eleven other Founders (wealthy pirates) had created their own safe haven pirate utopia, Libertalia. Before they can rendezvous, Sam's tower is ambushed and he has to use a motorcycle to escape from a convoy which Nathan intercepts. After a crash and lengthy chase, Nathan destroys the APC hunting the brothers and they make their way to the motel.

There, they pinpoint the latitude and longitude of Libertalia but they are shocked to encounter Drake's wife, Elena inside. Though there marriage is severely damaged and she returns to the States (and Sullivan goes with her), Sam and Nathan go to Libertallia together.

Sam proves to be equally talented in regards of climbing and fighting as his brother, Nathan, he actually taught Drake most of his skills as an adult. He is able to overpower opponents even with military background such as multiple Shoreline mercenaries however he has been overpowered occasionally. In fact he was almost killed by Nadine should Nathan not have intervened. He is also skilled with guns and all firearms, including handguns, rifles and shotguns.

So far Sam's most adamant talent aside from his brother is that he is a talented cyclist.

As a thief Sam is also a talented pickpocket something which Drake informs Sullivan. He is capable of swiping an item from someone without them even noticing, a good example is when Drake cut the power during an auction he was able to steal the crucifix in front of a crowd.

Sam is also very intelligent despite his humble upbringings. He has demonstrated the ability to read Latlin and understand Morse code. Together, he and Nathan created many theories about historical treasures or conspiracies such as Sir Francis Drake faking his own death and placing his real coffin off the coast of Panama and the location of Libertalia.

Between the two Drake brothers, Sam appears more level-headed, grounded and optimistic but at times equally as impulsive and reckless as his brother, as well accompanied with a dry sense of humor. After being orphaned with his little brother he took it upon himself to be the main provider of the two of them, acquitting Nathan to an orphanage as it was the "best place for him" and working for some stability. Perhaps due to his humble beginnings, Sam believed that he and Nathan were destined for something great and after coming into his mothers research this idea was confirmed. He and his brother later dedicated their lives to discovering and exploring the lost treasures of the world.

Also, Sam possesses the world and mind view of a thief. When telling Nathan they were going to steal back their mothers work he says "it's not stealing if it belongs it you."

When pushed, Sam is not above cold-blooded and ruthless tactics as to survive. Examples are lying to his brother after being reunited with him for 15 years about him getting out of prison and once held Nadine Ross as hostage as to stalemate Rafe. When he actually did push him, Sam was fully prepared to shoot her at pointblank if Nathan hadn't intervened.

Similar to Victor Sullivan, Sam is not adverse towards tobacco and has been seen smoking cigarettes something that Nathan is against him doing. 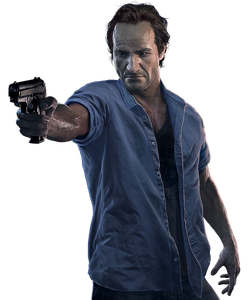 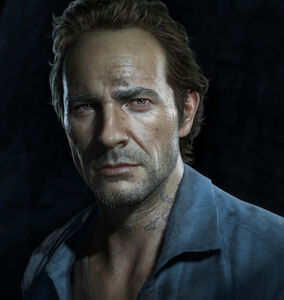 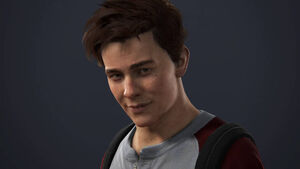 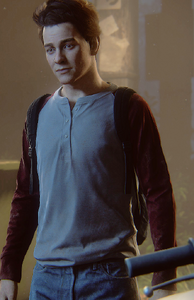 Sam with Nate on his bike. 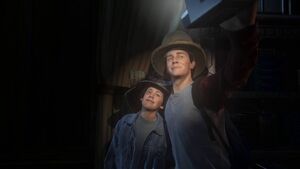 Sam and Nate take a selfie. 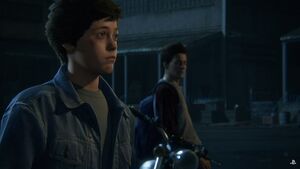 Sam with Nate after escaping from the police. 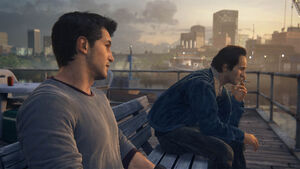 Sam hears Nate tell of his past adventures. 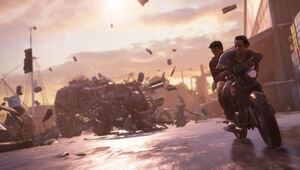 Sam and Nate being chased. 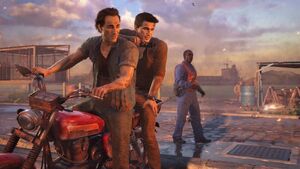 Sam and Nate surviving the chase. 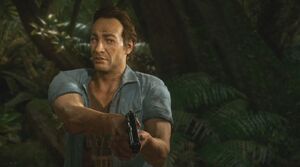 Retrieved from "https://hero.fandom.com/wiki/Sam_Drake?oldid=1756335"
Community content is available under CC-BY-SA unless otherwise noted.