Sam Uley is one of the supporting characters of Twilight Saga. He is the leader of Uley Pack.

He was portrayed by Solomon Trimble in the first film and currently Chaske Spencer in the sequels.

When in wolf form, he is pure black when he phases, and he was the largest wolf until Breaking Dawn, in which it is noted that Jacob has grown taller than him.

He is described as the calmest and most mature of his pack brothers.

When he broke every promise he had made to Leah. According to Jacob, Sam feels guilty for betraying Leah and responsible for the bitter person she has become; he is also pained that his lack of control over his phasing one day led to the deep scars on Emily's face. All of this causes him to hate the Cullens, whom he blames for both his transformation and for causing him to break Leah's heart.

Jacob explains in Eclipse, the chief of the whole tribe. It also makes his pack brothers subject to any direct commands he gives them, though he dislikes taking their free will away from them and does so only when necessary, such as for coordination during fights. He proves to be highly protective of not only the tribe, but of all humans, and even goes so far as to plan an attack on the Cullens in Breaking Dawn because of the threat he believes Bella's unborn, half-vampire child presents. This sparks a conflict between him and Jacob, causing the latter to split from the pack. At the end of the series, Quil, Embry, and the Clearwaters join Jacob's pack, leaving Sam to lead the remaining wolves.

His father, Joshua Uley, abandoned him and his mother when he was young, and Sam was thus forced to assume much adult responsibility at an early age. He is 19 when he first appears in the series, was the first wolf to phase. Before transforming, he dated Leah Clearwater, whom he is said to have loved. But because he was forbidden to tell her what he had become, their relationship fell apart and ended when he imprinted on Leah's cousin, Emily Young.

He is first introduced in, where his aversion toward the Cullens eventually leads Bella to discover that they are vampires. 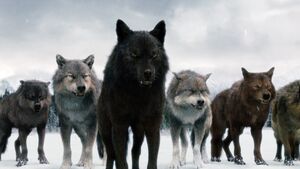 Retrieved from "https://hero.fandom.com/wiki/Sam_Uley?oldid=1638268"
Community content is available under CC-BY-SA unless otherwise noted.