Helping others and picking berries

To be more respected, make friends, and stand up to Amy (all succeeded), also try to win the one million dollar prize money (failed)

Samantha "Samey" (pronounced "Sammy"), labeled The Good Twin, is a contestant in the Total Drama series and twin sister of Amy. She is sweeter than her bossy twin sister, who treats her as little more than a doormat. When she learns to stand up to Amy for bossing her around with the help of Jasmine, she tricks Chris Mclean into thinking Amy is Samey so she gets eliminated. After Amy's elimination, Samey disguises herself as Amy.

Along with Amy, she was voiced by Bryn McAuley who also voiced Taylor in Total Drama Presents: The Ridonculous Race.

Samey makes her debut in "So, Uh This Is My Team?" with the fourteen other contestants on the Total Drama Zeppelin. She is first seen sitting with Amy. Amy becomes disturbed with Beardo's beat-boxing and commands Samey to switch seats with her, to which Samey begrudgingly agrees. A few seconds later, Amy is in fear of Jasmine, because of her incredible height, and commands Samey to switch seats yet again. Later, when she jumps off of the plane, Samey is seen in the air, holding onto Amy's leg. When Amy's parachute opens, Amy claims that she will miss her sister, if only a little, and kicks her off. Samey pulls the chord to her parachute and is ecstatic to find out that it was a fully functioning parachute. When she lands, Samey is thrilled to have actually made it. This is quickly cut short by Amy landing on her sister to break her fall. When Chris announces the teams, Samey interrupts just after Chris calls her, stating that her name is pronounced "Sammy" and not "Samey." Chris insists that Amy had stated previously that everyone calls her Samey. Samey admits that what Chris speaks of is the truth, but continues to try and and correct him. Just before the challenge, Samey comes up with an idea, which Amy takes credit for. As they begin to collect the needed items to create a shelter, Samey is used as a human shield by Amy. Samey is later seen helping her team and is seen cheering with her team when they win.

In "I Love You, Grease Pig!", Samey's morning is cut short when Amy forces her to go forage for food with Jasmine. Jasmine and Samey begin to bond, during which Jasmine tells Samey to stand up for herself against her sister. When Samey picks up what she believes to be an apple, Jasmine shoots it out of her hands. Shawn enters and explains that the fruit is a poisonous Manchineel fruit, and that it would have caused her throat to swell up and blister if she ate it. Samey walks off to heal her hand, which had been blistered by handling the fruit, and is later seen with her team as she learns about the challenge. When Amy volunteers to team up with Samey, Samey begins to believe that she is making progress with her. However, Amy later states that she only volunteered so no one else would have to deal with her. When it comes to her and Amy's turn during the obstacle course, Amy commands Samey to crawl into the tubes first, claiming that she herself was the beauty and the brains and that Samey was "the do-er of stuff that stinks," angering Samey. The pig races into the maze of tubes, dragging Amy and Samey inside. When they exit, Amy scolds Samey and tells her that it was all her fault.

In "Twinning Isn't Everything", Samey and Jasmine are foraging for food again, when Jasmine once again tells Samey that she should stand up for herself. They return to their team with the food and the team thanks Amy for her hard work, instead of Samey. This prompts Samey to yell at Amy for taking credit for Samey's work, despite Jasmine's plea, and Amy breaks down crying in front of everyone, manipulatively turning the team against Samey. During the challenge, Samey sticks with Amy and successfully hits Dave with a balloon filled with itching powder. Jasmine compliments Samey, however Amy interrupts, lying by claiming that she was the one who hit Dave. Jasmine argues on Samey's behalf, stating that she can tell them apart (because of Amy's beauty mark, which Samey does not have) and that she clearly saw Samey hit him. Samey teams up with Jasmine and Amy to target Shawn, and upon finding hiding place, Jasmine suggests that Samey throw the balloon, which makes her nervous. Amy attempts to take the balloon from her, which causes it to pop, costing their team the challenge. Samey states in the confessional that Amy always takes things from her, so after the challenge, Samey sits outside, seemingly about to eat the poisonous Manchineel fruit from the previous episode. Amy arrives and swipes the fruit, revealing that she has convinced the team to vote off Samey, and walks off, eating the fruit. During the elimination ceremony, the bottom two are Samey and Amy. Amy suddenly starts to gag as her throat begins to swell up due to the fruit she ate earlier; she tries to get Chris's

attention, but Samey interrupts her, claiming that she is only begging for sympathy. Samey then tricks everyone into believing that she is her twin sister and vice versa. Chris falls for it, and eliminates Amy; who is believed by everyone to be Samey, leaving Samey still in the game. In the confessional, Samey is happy that she was able to go against her sister, and Jasmine appears to be the only one who knows that Samey is still in the competition.

In "I Love You, I Love You Knots", Samey, still posing as Amy, asks if Jasmine is leaving to forage without her. Jasmine rebuffs her and says it was Samey who forged with her, for the sake of the act. After they finish forging, Rodney claims that the berries that "Amy" picked were far better then Samey's. Samey, clearly frustrated, claims that they're the exact same berries. Scarlett and Max then join in with saying hurtful things about Samey, much to her annoyance. During the Truth or Scare challenge, Samey is the first contestant picked, and Chris asks her who she hates the most. After much hesitation, and she says Amy, much to everyone is confusion, as they still believe she is Amy. Jasmine quickly comes up with a clever ruse, and when everyone begins to bash Samey yet again, Samey interrupts them and tells them to stop.

In "A Blast from the Past", Samey asks Chris why he is infatuated with injuring the contestants. Jasmine tells her to act more like Amy, which prompts Samey to state that if her hair gets wet during the challenge, she would freak out. When it's Samey's turn to compete, Jasmine tells her to think of Sugar as Amy. As a result, Samey ferociously attacks Sugar and runs away when scuba-bear attacks her. Later, when she competes again, Amy suddenly appears from the water and attacks her. She and Amy get in a fight, confusing everyone besides Scarlett, which costs her team the challenge. At the elimination ceremony, Samey tries to keep up the ruse that she is Amy, causing them to get into another fight. Annoyed, Chris decides to send both of them home, and as the both of them protest, they are both shot from the Cannon of Shame, eliminating Samey. 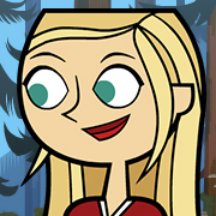 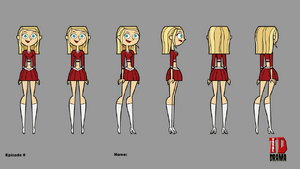 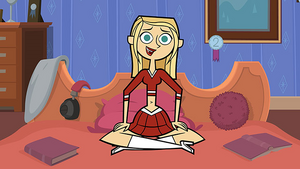 Samey in her pajamas. 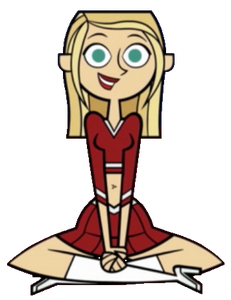 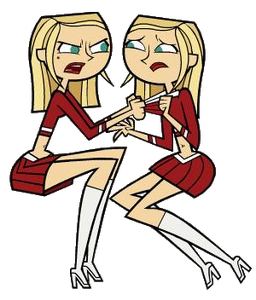 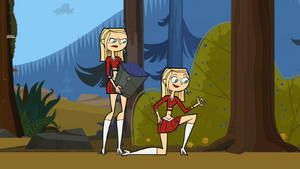 Samey is plucking the berries in the opening theme... 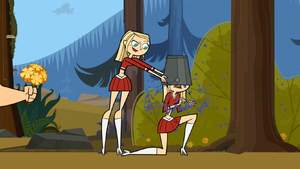 ...until Amy drops a backet of her berries on her head. 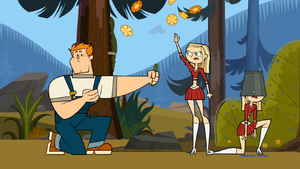 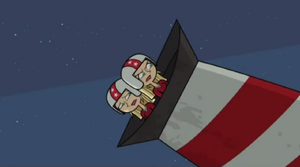 Amy and Samey are forced to leave the island together via the Cannon of Shame. 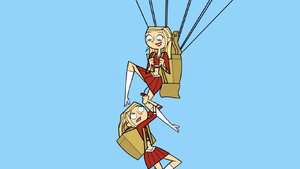 Amy kicks Samey off of her, letting Samey fall to her death. 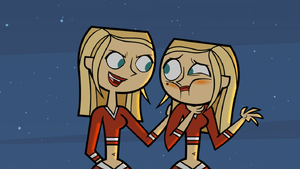 Samey pretends to be Amy and finally pays her back for everything she's done.
Add a photo to this gallery 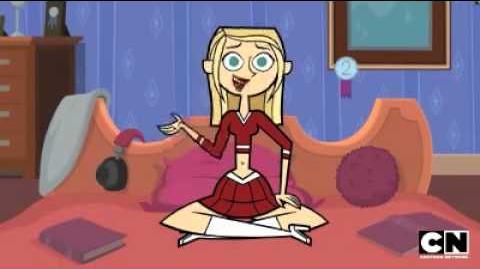 TDPI Audition Tapes Samey
Add a photo to this gallery

Retrieved from "https://hero.fandom.com/wiki/Samey_(Total_Drama)?oldid=2201427"
Community content is available under CC-BY-SA unless otherwise noted.