Samson is a supporting protagonist in Fire Emblem: Shadow Dragon and the Blade of Light, Fire Emblem: Mystery of the Emblem, and their respective remakes Fire Emblem: Shadow Dragon and Fire Emblem: New Mystery of the Emblem. A mercenary who took up residence in an Altean village, Samson became good friends with Arran, a former knight of an unnamed kingdom. However, the village Arran inhabited had bad blood with Samson's village, and while both men were willing to assist Altea's Prince Marth during the War of Shadows, choosing one would cause the other man's village to close its doors to him. By the time of the War of Heroes, Samson became Princess Sheena's bodyguard while Arran was made the new captain of the Altean knights, implying that the latter was Marth's canonical choice.

Unlike most mercenaries, Samson possesses a strong sense of honor that supersedes his love of money. As a result, he only accepts the services of clients that meet his moral standards, such as the compassionate Prince Marth. When not employed, Samson preferred living a simple life. However, as his relationship with Sheena developed beyond serving as a hired hand, Samson began to enjoy shopping for cute gifts she would enjoy.

For many years, Samson travelled the world selling his sword to employers he deemed just; one lengthy job involved protecting a village near the Holy Kingdom of Archanea's capitol city of Palace. For all of his journeying, Samson most often resided in the nation of Altea. In particular, he enjoyed a simple existence in a town not far from Altea castle. One day a knight from an unnamed Archanean kingdom named Arran took up residence in a neighboring village to Samson's. Samson and Arran quickly established a friendship over their shared principles of justice and refusal to compromise their ideals for the sake of a master. Unfortunately, their villages lacked such strong bonds and soon entered an ugly feud.

The two villages' bad blood persisted even as the country of Gra betrayed Altea and secured its castle for the tyrannical Dolhr Empire. Thanks to the efforts of Altea's Princess Elice, her brother Marth escaped with his tactician Malledus and a small retinue of nights. After two years in exile on the island of Talys, Marth embarked on a campaign to resist Dolhr, ultimately liberating the nation of Aurelius from Dolhr ally Macedon. Upon securing Aurelius, Marth met with its Prince Hardin and Nyna, the Princess of Archanea. Together, the three united their armies into the Archanean League, Marth serving as its commander. After liberating the Holy Kingdom, the League moved to liberate Marth's homeland. On the way to Altea castle, Marth stopped in Samson's village. The mercenary met with Marth and, recognizing his valor, offered his services. However, in response Arran's village angrily closed its doors to the League, to Samson's disappointment.

Samson helped the League storm Altea castle and slay its occupying leader, the cruel Manakete Morzas. From there, the League journeyed to the Fane of Ramon to recover the powerful Lightsphere and Starsphere, which could create a weapon powerful enough to slay Dolhr's Dark Pontifex Gharnef. After securing both Spheres, the League stormed both Macedon and fellow Dolhr ally Grust, Samson assisting with the defeat of Macedon's leader Michalis and the Grustian General Camus. The White Sage Gotoh used the Spheres to create the Starlight tone, which could pierce the otherwise impenetrable shield generated by Gharnef's Imhullhu tome. Gotoh teleported the League to Gharnef's home, the city of Thabes; Samson was among those who engaged the Dark Pontifex's forces while Gharnef himself was finally slain. Finally, Samson was present when the League stormed Dolhr itself, where Marth ended the War of Shadows by killing it's leader, the Earth Dragon Medeus. In the war's aftermath, Samson resumed his role as a wandering mercenary, and continued to limit his employers to those who met his standards of morality.

Like many countries after the War of Shadows, both the Holy Kingdom and the country of Gra were left in disarray. Nyna's advisor Boah advised her to marry either Hardin or Marth, as a strong king was needed to help restore Archanea to its former glory, and both princes demonstrated great valor and leadership. Nyna chose Hardin, and under his guidance Archanea experienced a swift recovery, culminating in its redevelopment as into the Holy Empire of Archanea, with the two royals as its first Emperor and Empress. As for Gra, its King Jiol paid for his betrayal of Altea with his death and his country's destruction, its remnant claimed by Altea. The people of Gra longed for their country's restoration. Eventually, their prayers seemed to be answered, but the return of Gra's independence came with a terrible price.

Hardin truly adored Nyna, and gleefully accepted her marriage proposal, but quickly learned that Nyna's motivations were purely political, and she did not reciprocate his affections. Hardin fell into an acute depression, isolating himself and drinking constantly. Unfortunately, a resurrected Gharnef learned of Hardin's sorrow and saw an opportunity to use him in his plans to revive Medeus. Disguised as a merchant, the Dark Pontifex offered Hardin the powerful Darksphere, which granted an impenetrable magic shield but twisted him into a malevolent tyrant. The Archanean army devastated Altea after declaring war over pretenses Hardin engineered, and instated Jiol's daughter Sheena as leader of an independent Gra in exchange for the country's loyalty. However, Sheena quickly realized she was no more than a figurehead, and Hardin held the true power in Gra. Aware she would be disposed of the moment she was no longer needed, Sheeda hired Samson as a bodyguard. Samson quickly became infatuated with the Princess, admiring her kindness and devotion to her people. As such, he continued to defend her even as she ran out of funds to pay him.

As the War of Heroes continued, Marth slowly accrued an army, and reobtained the Lightsphere from Gotoh, which could counteract the Darksphere's magic. After liberating Altea, Marth learned from Gotoh that Gharnef had returned and planned on using four clerics to resurrect Medeus. Intent on preventing Nyna's abduction, Marth's army moved towards the Holy Empire's capitol of Palace, passing through Gra along the way. As army advanced, Sheena joined her soldiers, expecting their defeat but wishing to behold her kingdom's final days firsthand. For his part, Samson refused to leave her side. To Sheena's surprise, Marth refused to engage with Gra's soldiers as they panicked and fled. Approaching her, Marth claimed that he regretted how their countries' relationship deteriorated during the War of Shadows, and that he did not view Gra as an enemy. Moved, Sheena immediately defected to Marth's army. Confident that Marth would protect Sheena, Samson prepared to resume his life as a mercenary, but Sheena begged him to stay. In Palace's Millennium Court Marth learned from Hardin that he personally delivered Nyna to Gharnef. As Samson helped cut down Archanean soldiers the Lightsphere's magic pierced Hardin's shield, mortally wounding him but also restoring his senses. With his dying breath, Hardin regretted his actions and begged Marth to save Nyna. Samson accompanied him to The Dragon's Table, where a resurrected Medeus held the four brainwashed clerics, intending to sacrifice them should he be slain again. However, each maiden was released from their trance by their loved ones, allowing Marth to kill Medeus once again, ending the War of Heroes. The war heavily decimated Archanea's countries, and most of their rulers relinquished their sovereignty to Marth, including Sheena. Marth declared himself First King of the Archenean Alliance, and Sheena moved to the capitol of Palace with Samson.

Samson's portrait in Fire Emblem: Shadow Dragon and the Blade of Light.

Samson's portrait in Fire Emblem: Mystery of the Emblem.

Samson's portrait in Fire Emblem: New Mystery of the Emblem. 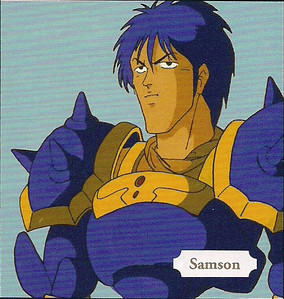 Samson's artwork from Fire Emblem: Shadow Dragon and the Blade of Light 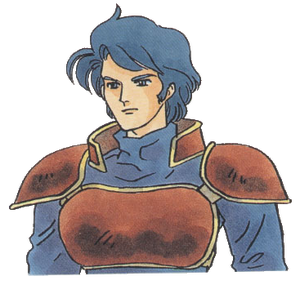 Concept art of Samson from Fire Emblem The Complete. 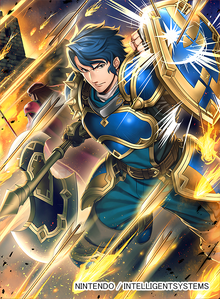 Artwork for a Fire Emblem 0 trading card of Samson .
Add a photo to this gallery

Retrieved from "https://hero.fandom.com/wiki/Samson_(Fire_Emblem)?oldid=2137782"
Community content is available under CC-BY-SA unless otherwise noted.