Samson is the main protagonist of Disney's CGI animated film The Wild. He is a male African lion and the father of Ryan.

He is voiced by Kiefer Sutherland, who also played General Warren R. Monger in Monsters vs. Aliens, Jack Bauer in the 24 series and Big Boss in Metal Gear Solid: Ground Zeroes and The Phantom Pain.

Samson is very devoted to his zoo friends Benny, Bridget, Nigel, Larry, and his son Ryan. Samson is kind and loving and enjoys telling Ryan stories about the wild, though none of them were actually true. Samson was born in the circus as a cub. He was very timid back then and was unable to roar, much like his son. After failing to roar at a mechanical wildebeest, Samson's father told him that a wild lion could roar before allowing Samson to be shipped to the New York Zoo.

This proves that Samson was not from the wild, which he kept secret from everyone except Benny. However, he eventually reveals this to the others and Ryan during the film's climax. At one point, Samson gets pushed off a cliff by Kazar's wildebeest henchmen, but he survives the fall and eventually finds Ryan with help from Cloak and Camo. With some motivation from his son, Samson digs deep down and uses his mighty roar to defeat Kazar, the leader of the wildebeests. He then rescues Ryan, and all the animals (including Kazar's former minions) head home on a boat that Samson had previously hijacked. 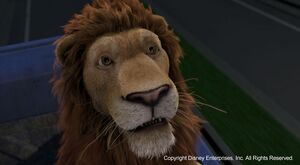 Retrieved from "https://hero.fandom.com/wiki/Samson_(The_Wild)?oldid=2011211"
Community content is available under CC-BY-SA unless otherwise noted.