Living in the Shire.

Kill Gollum before he attempts to bring the One Ring back from Frodo (failed).

Samwise Gamgee, often simply called Sam, is the deuteragonist of J.R.R. Tolkien's fantasy epic novel, The Lord of the Rings, and in Peter Jackson's film trilogy. Sam is a Hobbit, a halfling race who mostly live quite rural lives. Sam was a gardener for most of his life but one day leaves his home in the Shire when his best friend and neighbor Frodo Baggins finds that he is charged with taking on a cursed ring referred to as the One Ring and most make the arduous journey across the land to see to its destruction.

Sam appears as the deuteragonist of The Fellowship of the Ring (2001), the tritagonist of The Two Towers (2002) and a major character of The Return of the King (2003).

In the Peter Jackson adaptations, he was portrayed by actor Sean Astin, who also played Mikey Walsh in The Goonies, Bob Newby in Stranger Things, and also voiced Kodi in Balto III: Wings of Change, Chester in the Bunnicula animated series, and Raphael in 2012s Teenage Mutant Ninja Turtles animated series.

For years The One Ring was in possession of the Hobbit Bilbo Baggins, Frodo's uncle. Bilbo had come up the Ring by chance years ago during his own adventures and used it's power of invisibility to evade danger in his quest. After the adventure Bilbo kept the ring as a keepsake on his mantle without using it. At his 111th birthday Bilbo puts on The Ring to vanish before his friends and neighbors as he wished to take his leave of the Shire and retire with the Elves and wanted to go with a bit of presentation. The wizard, Gandalf who was an old friend of Bilbo had visited for the retirement and sees the ring used. Gandalf then realizes the cursed ring he has been seeking for years has been with his old friend the whole time. Gandalf convinces Bilbo to leave the Ring for Frodo before he goes and then summon Frodo to inform him of the Ring's import.

Gandalf tells Frodo that The Ring has the power to make it's wearer invisible but also resonates with it's master, the evil Sauron, allowing to influence and eventually possess the wearer and those around him. As the Ring was unused for years Sauron did not know where it was, but with its recent use Sauron's attention will be fixed on it and by extension the Shire. Both conclude it must be taken away and destroyed but Gandalf says he cannot be the one to bare it. Gandalf had magical powers and if he were influenced by the Ring he would become a truly unstable evil so the Ring needed to be born by one with no innate might and a pure heart, leaving only Frodo. Frodo eventually sees he must be the one to take The Ring away to the elves to see to its destruction, however Gandalf notices someone is spying on them and discovers it is Samwise, who had been listening at the window all along. Because Sam was privy to the story it was best for him to journey with Frodo so he would not let the information slip, Sam is less than happy about needing to leave his home and go on a dangerous journey but does not wish for anything to happen to his childhood friend and so he goes on with him.

The Fellowship is Formed

Frodo and Sam prepare to leave while Gandalf head on ahead to consult with the head of his order, Saruman but says they can meet him at The Prancing Pony Inn while passing the road. Once ready Frodo and Sam meet Meriadoc "Merry" Brandybuck and Peregrin "Pippin" Took, two other childhood friends. The two were outrunning a farmer who had caught them stealing his crops and in their fleeing decided to follow Frodo and Sam. The four follow the road until they get to The Prancing Pony however Gandalf is not there, they do however here from a ranger named Strider who later reveals his true name to be Aragorn. Aragorn was sent by Gandalf to help protect the Hobbits and help them to the elven city of Rivendell. Sam wants to know what happened to Gandalf however no one is sure, only that he did not arrive so something is off, Aragorn tells them that with The Ring in Frodo's possession they can not delay, as the 4 had nearly been caught by a wraith on the road Sam eventually agrees to trust him and move onward.

At Rivendell Sam is happy that the four can begin home, however Frodo sees that of the meeting called everyone under the influences of The Ring and ready to tear each-other apart over how to destroy it and who is to do it. Frodo offers to take The Ring himself to the treacherous Mount Doom, where it was forged and throw it into the fires bellow the mountain. Despite wishing to go home Sam is the first one to join the quest on it's full way through. Merry, Pippin and Aragorn quickly agree to go as well as do the meeting members Legolas of the elves, Gimli of the dwarves and Boromir of the human capital of Gondor. Together the Fellowship make the long journey to Mt. Doom seeking to destroy the cursed ring. While perhaps one of the weaker members of The Fellowship, Sam's closeness to Frodo is largely what manages to keep Frodo from falling under Sauron's spell during their travels.

The Lord of the Rings: The Two Towers

The Lord of the Rings: The Return of the King 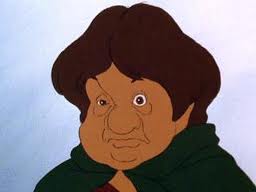 Samwise in Ralph Bakshi's adaptation of The Lord of the Rings. 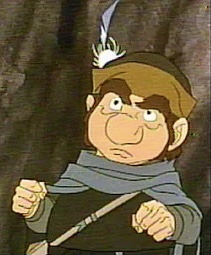 Samwise in the 1980 animated adaptation of The Return of the King.

Sam and Frodo continuing to travel to Mordor.

Sam looking at the road to Mordor.

Sam and Frodo during the destruction of Mount Doom.