Power to cause miracles to occur

Sanae Kochiya is a human, but is also a distant descendant of a god, Suwako Moriya. Her role at the Moriya Shrine is similar to a Shrine Maiden, but with her inherited power Sanae has become more like a deity herself. When humans on the outside world began losing their faith in her and Kanako, the shrine's actual deity, Kanako decided to move the shrine to Gensokyo where at least youkai might have faith in them. Sanae is also a friend of Reimu and Marisa. But Reimu sees Sanae also as a rival, because they are both Shrine Maidens.

During the events of Mountain of Faith Sanae tried threatening the Hakurei Shrine in order to establish the Moriya Shrine as the dominant one, not realizing how powerful humans like Reimu and Marisa were. In response to the threats Sanae was defeated by the heroine followed shortly after by Kanako and Suwako's defeat. However, the residents of the Moriya Shrine have since come to an understanding with their new neighbors and live in peace with the other residents of Youkai Mountain.

In Undefined Fantastic Object, depending on the scenario, she is ordered either by Kanako to train her own abilities by hunting Youkai or by Suwako to find the Treasure Ship, depending on this, her secondary bullet will become a snake or a frog.

In Touhou Hisoutensoku, thinking that a gigantic robot appeared in Gensokyo, she is in pursuit of the giant figure, when she stumbles into a giant pit to the nuclear reactor run by Utsuho Reiuji and learns that Suwako is responsible for creating the robot figure, Hisoutensoku.

Sanae notices the strange spirit at the Moriya Shrine in Ten Desires and knows what they are, divine spirits, born due to a very strong feeling of human greed, fear, desire and feelings. She takes the opportunity to gather the divine spirits, as it is the same as gathering faith of the human. Though, she can't figure out why those divine spirits are around in the first place.

(Touhou 10, 12.3, 12.5, 13) Wears a blue and white outfit similar to a shrine maiden's with light blue polka dots and stripes covering the blue areas. Has long light green hair, and yellow eyes (dark-green in Undefined Fantastic Object, Ten Desires, and blue in Touhou Hisoutensoku). Wears a snake-shaped hair accessory wrapped around her hair on one side, and a hair clip shaped like a frog's head (both probably meant to represent Kanako and Suwako). 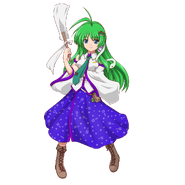 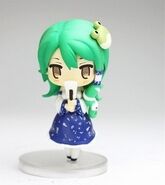 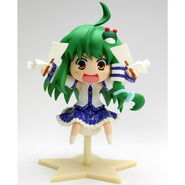 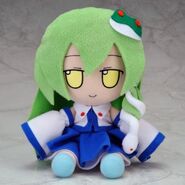 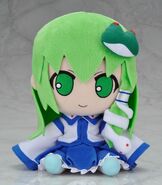 Retrieved from "https://hero.fandom.com/wiki/Sanae_Kochiya?oldid=1388946"
Community content is available under CC-BY-SA unless otherwise noted.