He was originally a ward and sidekick to Wesley Dodds, who was the original "Sandman" until he took on the mantle in the twenty-first century after his mentor's death. After being exposed to radioactive silica particles, Hawkins gained the ability to manipulate the earth and soil on the planet. He was also passed down the precognitive dreams of Dodds, allowing him to see ahead to stop criminals.

He was created by the late Mort Weisinger and the late Paul Norris, and first appeared in Adventure Comics #69 in December of 1941.

Sanderson "Sandy" Hawkins was born to unnamed parents, and became an orphan for unknown (presumably the death of his parents or being abandoned). Sandy was then adopted by Wesley Dodds, who was secretly the vigilante "The Sandman" and was the partner of Sandy's aunt, Dian Belmont. After becoming Wesley's ward, Sandy became his partner, and was given the name "Sandy the Golden Boy". During his tenure as a vigilante, Sandy became a member of the Young-All Stars, which was later absorbed into the All-Star Squadron. When Dodds was creating a silocoid gun, but it failed and was exposed to Sandy, who was kept in suspended animation since Wesley couldn't be cured from the radioactive silica particles.

In the twenty-first century, Sandy was eventually returned normal by Wesley and the Justice League of America, and Hawkins found himself able to transform and manipulate sand due to the silica particles. He then changed his code name to "Sand", and also wielded a gas mask and a "gas gun" like Wesley, but also inherited his mentor's precognitive dreams after Dodds died.

Due to being suspended animation, Sandy found it hard to return to normalcy in the new century, and would often distant himself within the superhero community. While briefly acting as the head of the new incarnation of the Justice Society, Sandy found himself tied in a love triangle with Kendra Saunders, also known as Hawkgirl, and Hawkman. The three managed to resolve their differences, however, but Sandy showed himself to have genuine feelings for Kendra.

While adventuring during the "Prince of Darkness" storyline, Sandy was believed killed, but his body was trapped beneath the Earth while his soul was trapped in the dreamtime. He was able to return due to Kendra being the mental bridge since he still had feelings for her, and he was able to control his powers more so.

After returning to the world, Hawkins decided to take the mantle of Sandman to honor his late mentor, but become the Justice Society's "recon man". Sandman worked as a detective for the team while also dealing with his precognitive dreams, which have turned into nightmares at this point. During "The Kingdom" storyline, Sandy met the god-like being Gog, who allowed Sandy to have blissful dreams, but he lost his ability to track down criminals ahead. When Sandy and the heroes learned that Gog was planning to fuse with the Earth, they battled him, and he took away wishes he gave. Sandy lost his blissful dreams, thus meaning his precognitive dreams and nightmares returned. 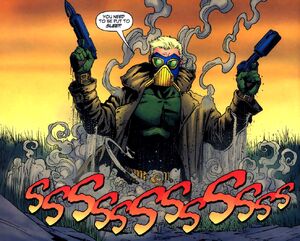 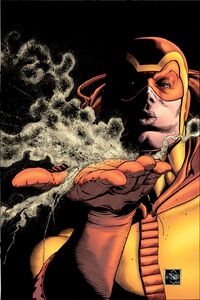 Hawkins as the new Sandman.