Member of the Anti-Auditor Agency

Defeat the A.A.H.W. and the Auditor.

Fighter
Sanford is one of the three main protagonists of the Madness Combat series. He appears to be a member of an organization that opposes The Auditor alongside his partner Deimos and possibly Hank J. Wimbleton.

Sanford first appeared along with Deimos to deliver the Dragon Sword to Hank. However, the Improbability Drive caused them to get crushed by a building shortly after.

However, Sanford and Deimos survived and fought their way through the A.A.H.W. forces. The two later raided an A.T.P. Soldat facility and blew it up.

Sometime afterward, Sanford and Deimos hijacked a truck carrying a squad of A.T.P. Engineers. They then headed towards where Hank's body was located at after he was killed by Jesus. Sanford held off the A.A.H.W. soldiers, while Deimos went to revive Hank in a magnification chamber.

The Auditor attacked our heroes, and at first had the upper hand. However, Hank was able to wound the Auditor with electrically-charged punches, forcing the Auditor to retreat and summon 1337 Agents and Engineers to fight the two. 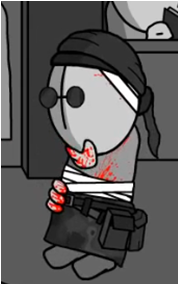 Sanford trying on his signature pair of glasses.
Add a photo to this gallery
Retrieved from "https://hero.fandom.com/wiki/Sanford?oldid=1911130"
Community content is available under CC-BY-SA unless otherwise noted.