Sentry at Snowdin Forest and Waterfall

To ensure the safety of Frisk (Pacifist Run).
To make Frisk quit the game or stop their genocide (Genocide run).

Frisk/Chara (on the Genocide route, determined by how many monsters killed or if Papyrus is killed)

Sans is an extremely short and big-boned skeleton, wearing a light-blue parka, unzipped at all times, with a white tank-top underneath, black shorts and salmon slippers according to his official Fangamer plushie and Super Smash Bros. Ultimate Mii Gunner costume.

He has a huge round skull shaped similarly to a slice of bread and has large bags under his eye sockets, which have white glowing pupils floating in it. One strange thing about his skeletal body are his hands which look more like mittens rather than skeletal hands.

He is seen with a very large toothy grin at all times, and hardly moves the corners of his mouth. He has white pupils, which tend to disappear when he is serious. A bright, flashing iris appears in his left eye during the battle against him, as well. This eye starts off merely glowing, but as he utilizes his time warping powers, it starts to flash vividly.

Sans is shown to be very laid-back and fippant, sleeping on the job as often as he takes breaks. He does just enough work to avoid being fired by Undyne. He enjoys making bad puns usually relating to skeletons, to the annoyance of his brother. He is kind and reassuring, but becomes eerily serious at abrupt moments (particularly when angry). He deeply cares for and admires his brother, Papyrus, and reads him bedtime stories. He likes to mess with Papyrus, as he sends him "bad puns in a goofy font" on the UnderNet. He also leaves a dirty sock in their living room for Papyrus to fuss over. Sans worries about others hurting Papyrus or taking advantage of him. In some Neutral Endings, Sans is afraid to tell Papyrus about other characters' deaths, so he lies about them going on a vacation.

He is also very observant, and his lines and actions change the most through the path and the way of playing the game. He knows the number of times he had defeated the player (in Genocide Route). He tends to say he hates to make promises, this is likely a result of having to harm a human, as he promised Toriel he would protect humans. He will deeply resent Frisk if they kill Papyrus. In the same case, he also seems to go missing, nowhere to be found until the end of the game. Despite this, he only fights Frisk on a Genocide Route, when they are a threat to the timelines. This is possibly due to his promise to Toriel to protect humans, as killing Frisk would obviously break the promise and he figures he has no choice but to do so on a Genocide Route.

His laziness is noted again during the final fight in the Genocide Route - he is unsure if being somewhat aware of the timeline resetting has broken his spirit, knowing that everything he does will mean nothing... or if he's just using it as an excuse to slack off. He also seems to be quite patient, as shown by his willingness to use his "Special Attack" (which is nothing) until the end of time in order to bore the protagonist into quitting the game.

As shown during his fight on a Genocide Route, Sans isn't above using underhanded tactics in battle, as shown when he tries to manipulate Frisk into sparing him, then killing them if they yield. Granted, Sans knew that Frisk would very likely end all timelines if they get past him, so this may be out of desperation to stop them, or out of spite for their murder of Papyrus and other monsters.

Somehow, Sans knows that he's really in a video game, as if the player gets an "Impossible Ending" by somehow meeting none of the requirements for completing Undertale or by hacking the game, Sans will explain in his phone call that the call is an error-handling message and will suggest contacting the developer so he can fix it or add another ending. Sans then says "chances are, though... you're just a dirty hacker, aren't you? yeah, get outta here." before hanging up.

Sans can quickly travel or teleport using what he calls "shortcuts."

In combat, he uses "Gaster Blasters," devices that resemble a skull, to shoot a kind of laser beam. Sans excels in combat and fights with unique abilities that include: Karmic Retribution, changing the effect of gravity on the SOUL, and attacking the protagonist in the selection menus. His magic reacts to EXP; Karmic Retribution would presumably be weaker if the protagonist had little EXP.

Sans also plays the trombone, though he is only seen playing it once. Papyrus finds his "incidental music" annoying, implying that he has played many times before.

Like other characters, Sans is aware of when the game's code suffers bugs and calls the protagonist a "dirty hacker" if they achieve an impossible ending of a Neutral Route.

Sans was added in Super Smash Bros. Ultimate as a downloadable costume for the Mii Gunner character in Wave 3. He uses a Gaster Blaster as his arm cannon. 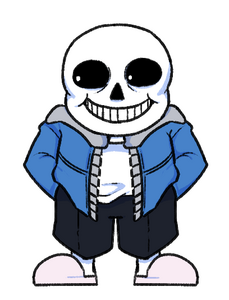 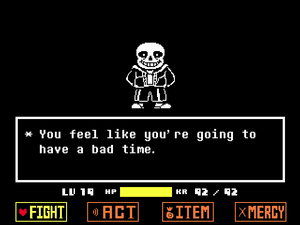 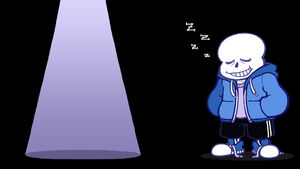 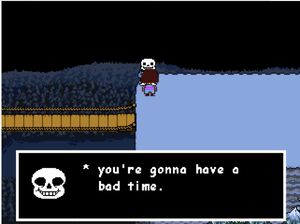 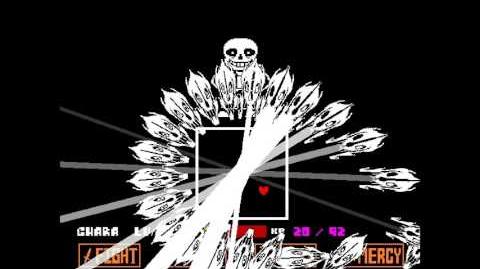 Retrieved from "https://hero.fandom.com/wiki/Sans?oldid=1953031"
Community content is available under CC-BY-SA unless otherwise noted.