Needle work.
Having fun with her friends.

Rally the Free Folk and the northern houses to take back Winterfell and save Rickon from Ramsay Bolton (TV show only, succeeded, but failed to save Rickon).
Survive the Long Night.
Defeat Daenerys Targaryean.
Free the North (TV show only, all succeeded).

Sansa Stark is one of the main characters of the A Song of Ice and Fire novel series as well as it's HBO TV series adaptation, Game of Thrones. She is the eldest daughter of Lord Eddard Stark and Lady Catelyn Stark. Sansa has five siblings: three trueborn brothers King Robb Stark, Bran and Rickon, a younger sister Arya, and a half-brother Lord Commander of the Night's Watch, Jon Snow (revealed to be her cousin by blood in the television series). Sansa is 11 at the beginning of the book series and 13 at the beginning of the TV series. She is currently 13 in the novels and 20 in the TV series.

She is portrayed by Sophie Turner, who also portrayed the younger version of Jean Grey in X-Men: Apocalypse and X-Men: Dark Phoenix.

She is betrothed to Prince Joffrey Baratheon, son of King Robert I Baratheon and Queen Cersei Lannister, making her the future Queen of the Seven Kingdoms. However, when her father discovers that Joffrey is, in fact, the bastard son born of incest between Cersei and her brother, Ser Jaime, he tries to crown Lord Stannis Baratheon as the new King after Robert's death and is executed in process. This has further negative effects on Sansa, who continues to be tortured by King Joffrey until the end of their betrothal when Sansa is married to his uncle, Tyrion Lannister. After the wedding between Joffrey and Margaery Tyrell, she escapes King's Landing under the protection of Lord Petyr Baelish, relocating in the Vale and pretending to be his bastard daughter, Alayne Stone.

In the TV series, after escaping King's Landing, Sansa is persuaded by Baelish to marry Ramsay Bolton, as the upcoming threat of Stannis Baratheon's attack would free Winterfell from the Boltons' abusive hold. However, after the battle fails, she eventually escapes Winterfell with the aid of Theon Greyjoy and heads to Castle Black, reuniting with her half-brother, Jon Snow. After receiving a threatening letter from Ramsay, Sansa persuades Jon to help her rally the Free Folk, the smaller Northern houses and the remaining Tully forces in a quest to retake Winterfell and save Rickon. The ensuing Battle of the Bastards is a victory for House Stark, and Ramsay is captured. Later, Sansa kills Ramsay by releasing his starving dogs on him. However, Rickon did not survive the battle.

Jon is then named King in the North and reveals that the Night King and his army of the undead are on the move to wipe out all life in the world, and orders all the northern armies to prepare for war, even being forced to conscript children as the North has lost many adult soldiers in Robb's campaign. But even so, the Northern army is still too small. Jon then learns that Daenerys Targaryen has an large army and is invading Westeros to take the Iron Throne. Jon decides he must negotiate an alliance, but Sansa has doubts of allying the North with Targaryeans. Jon however, does sail for Dragonstone to negotiate an alliance.

While Jon was away, Arya and Bran returned to Winterfell. Lord Baelish, who had helped the Starks win the Battle of the Bastards, desired to seize the Iron Throne with Sansa as his queen and tried manipulating the two sisters against each other. Arya however, with her skills in assassination and espionage, and Sansa's gained experience of politics from her time as a political pawn and prisoner, along with Bran's greenseer power managed to turn the tables on Baelish and tried him of treason(Especially since he betrayed their father in the first place), and executed him, making Sansa popular with the Lords of the North and Vale.

Later, Jon returned to the North with Dany and her army, along with other allies who had helped him capture a wight to prove to the Lannisters that the White Walkers were real. Jon then revealed that in order to gain Dany's support, he bent the knee to her, much to the shock of the Northern Lords. The Golvers were so shocked, they withdrew their armies. Nontheless, the Northern armies, along with Dany's army of Unsullied and Dothraki readied themselves for the White Walkers invasion. At this time, Sansa was reunited with Tyrion Lannister, while they remained on good terms, they both agreed that their brief marriage would not have worked. In addition, Theon and a group of Ironborn loyal to him arrived to help the Starks. Jaimie also arrived to help.

Since Sansa had never received any military or combat training, she along with all noncombatants went into the Winterfell crypts for their safety. However, the endless armies of undead breached Winterfell, and the Night King was able to ressurect the dead of House Stark, who proceeded to kill numerous civilians. Sansa was able to kill a few with some lucky knife stabs, but even she began to be overwhelmed. But just as it seemed that all hope was lost, Arya destroyed the Night King, killing all the undead, and saving the world.

Though the world was saved, the price Sansa and the others paid, was costly. Half of their armies had been slain in the battle, and Daenarys, grief stricken by the loss of Jorah Mormont, one of her most trusted allies, insisted that the war against the Lannisters continued. Sansa tried to persuade Daenerys call off her war, and acklnowledge House Stark's freedom and independence, but Daenaerys refused, insisting that the Seven Kingdoms were hers by right, and she had lost too much to give it up.

Later, Jon revealed to Sansa and Arya something that had been revealed to him prior to the battle against the Night King, he was not really a northern bastard. He was really the legtimate son of Rhaegar Targaryean, and Lyanna Stark, who had been secretly married shortly before Robert's Rebellion, making HIM the true heir to the Iron Throne. He implored Sansa and Arya not to reveal this to anyone. However, Daenerys had already become aware of this, and began to feel more alone and desperate, and even fearful that more people would support Jon over her.

Sansa however, knew that Daenerys was dangerous and had dragons that could be a threat to the North. She also knew Daenerys was on the verge of succumbing to Targaryean Madness because of the trauma and loss she had endured throughout the series. So she tells Tyrion the truth, Tyrion in turn, tells Lord Varys, and the two, fearing for Daenerys's worsening state of mind.

Ultimatly Sansa's fears are proven when Daenerys succumbs to Targaryean Madness durring her invasion of Kings Landing as she burns the city and murders millions of innocents. However, Jon, albiet reluctnantly, kills Daenerys, saving the world, as Daenerys had decided to wage war on other lands and nations.

With Daenerys dead and the Iron Throne destroyed, and Jon arrested for killing Daenerys, Sansa, along with the other Lords of Westeros traveled to King's Landing to debate on who would be the next king. Due to his immense knowledge of the past and present due to being the 3 eyed raven, Bran was chosen to be the next King of the Andals and the First men, albeit in a more elective position as he cannot father children. Sansa however, decided that the North had too many painful memories of being part of the Seven Kingdoms, and once again, declared the North an indpendent realm. Bran acknowledged the North's freedom, and Sansa was crowned Queen in the North.

The Kingdom of the North, was finally free. Jon was exiled back to the Night's Watch, while Arya, wanting to find her own place in the world, chose to leave Westeros and travel west, to see what lands lay west of Westeros. Jon ultimatly did not stay with the Watch, and left to live with the Free Folk. Sansa, after all the trauma, humilation, and abuse she had suffered, was crowned Queen in the North.

Sansa grew up as the eldest daughter of a Great House, trying to emulate her mother's example of a "proper lady" from the southern courts. Her devotion to the traditional "feminine virtues", such as music, poetry, singing, dancing, embroidery, and other traditional feminine activities, eventually causing friction between her and her tomboyish younger sister Arya, with whom she had a sibling rivalry. As a young girl, Sansa naively believed in the tales and epic romances in which every princess gets her honorable knight in shining armor to sweep her off her feet, her biggest dream being to be married to a handsome prince, sitting around with other noblewomen eating lemon cakes while gossiping about the goings-on at court.

However, the reality of the bloody game of thrones, in which her own father had fallen, along with constant torture from Joffrey and his men after Ned's death forced Sansa to realize that life is not like the fairy-tales she used to believe in as a little girl. She is forced to quickly mature and see the hard truths of reality. Further accentuated after the Red Wedding, in which her mother and elder brother were murdered by orders of the Lannisters in their alliance with the Freys.

In the TV show, the numerous crimes and tragedies against herself and her family have darkened Sansa's personality, turning her from a sweet naive girl into a more hardened, disillusioned young woman. Witnessing the ruin of her House had somehow made Sansa more determined to fight back and reunite with her surviving family. After she is finally reunited with a family member, her brother Jon, Sansa persuades him to help her retake Winterfell, the ancient seat of House Stark, from the Boltons. Together, Sansa and Jon successfully retake Winterfell for House Stark. 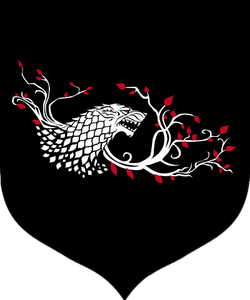 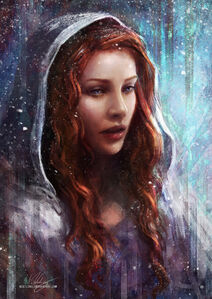 Sansa in the novels. 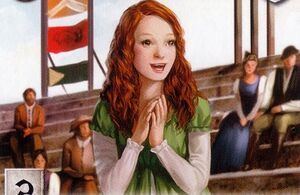 "Better than the songs!" 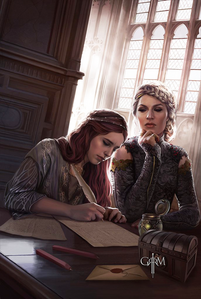 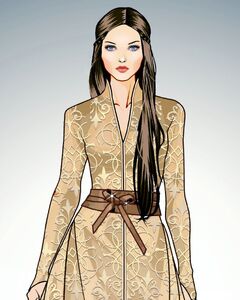 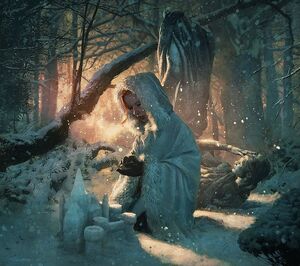 Sansa at the gardens of the Eyrie. 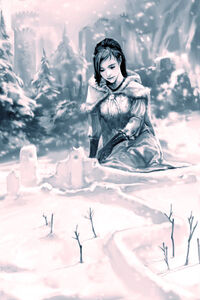 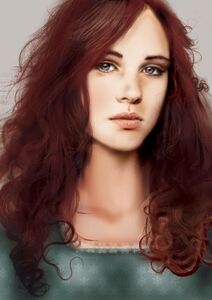 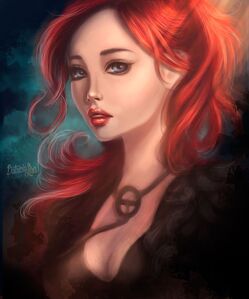 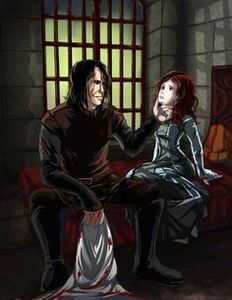 Sansa with Sandor Clegane during the Battle of the Blackwater. 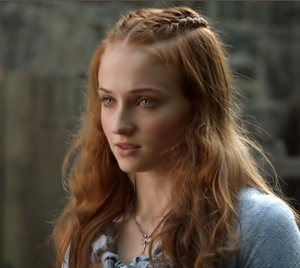 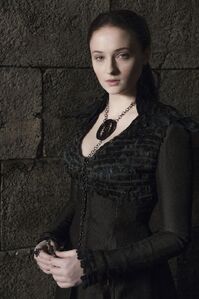 Sansa as Alayne in the TV show. 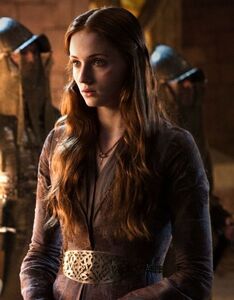 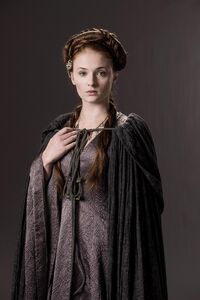 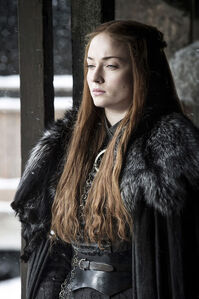 Sansa as the Lady of Winterfell. 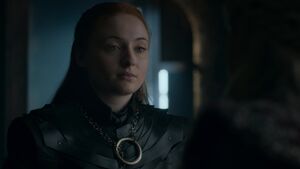 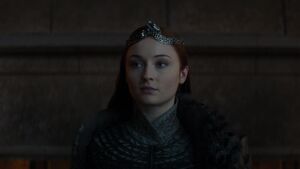 Sansa become the Queen of the North.