Song of the Sea

Retrieve her selkie coat, find her voice and save the faerie world (all succeeded).

Saoirse (pronounced Sier-sha) is the deuteragonist in Song of the Sea. She is Conor and Bronagh's daughter and Ben's little sister.

She was voiced by Lucy O'Connell in English and Fionan Nolan in Gaelic.

Saoirse is half human and half Selkie, when her mother Bronagh was pregnant with her, she became ill and ran into the ocean to save and give birth to the baby.

Saoirse soon washed ashore and with her mother gone, Conor and Ben were all she had. Saoirse often pined for her older brother Ben's attention but Ben took an immediate dislike to her, believing her birth caused their mother's "demise". Years later, Saoirse was mute as she never spoke since she was born, especially during her sixth birthday and her brother was still bitter and resentful towards her. Indeed, Saoirse's birthday was spoiled when Ben shoved her face into her cake and later scared her with the story of Macha the Owl Witch and the implication that he didn't love her.

Saoirse is often drawn to the presence of seals in the ocean and the sea itself, to the chagrin of her brother who fears water.

One night, Saoirse finds a special white coat that she puts on and goes swimming with the seals. As she does, Saoirse turns into a seal herself and washes ashore where Granny found her, she had come down with a cold. Soon after this, Granny decides that she and Ben aren't safe at the lighthouse and wanted them to come live with her in town.

Saoirse still wanted swim like before again but the white coat was back at the lighthouse, she tried use one of Granny's coats by using it in the tab but failed. Granny punished Saoirse and Ben for this by sending them to bed early. Saoirse later follows Ben when he sneaks out to go back to the Lighthouse.

Along the way, Saoirse is abducted by a trio of Na Dione Sidhe (faeries) who know she's a selkie and require her to sing the selkie song to save them from Macha the Owl Witch. Since Saoirse is mute, Ben has to speak for her but knows about the faeries thanks to their mother's stories so the faeries instruct him to get Saoirse home and retrieve her silkie coat. At this point, Saoirse and Ben are attacked and almost captured by Macha and her owls but Saoirse wards them off by playing their mother's seashell horn, allowing her and Ben to escape.

Saoirse and Ben attempt to return home on the bus but Saoirse insists on following the faerie lights and she and Ben almost lose their way until Cu finds them. Saoirse and Ben attempt to follow Cu home but Saoirse falls ill and it starts to rain so Ben carries her to a Holy Well through a patch of stinging nettles. Saoirse repays her brother by nursing his legs with dock-leaves and gives him the shell-horn before jumping down the well with Cu and a conflicted Ben following soon after.

At this point, Saoirse is found and captured by Macha's owls who take her to Macha's home where she is imprisoned in the attic and left to turn to stone though somehow Cu finds her and comforts her. Later on, Saoirse and Cu are found by Ben and at Ben's urging, Saoirse plays the silkie song on the shell-horn, releasing herself but this weakens her to a point that she drops the shell-horn and smashes it. With help from Macha's son Mac Lir's dogs, an increasingly-ill Saoirse is escorted back to the Lighthouse with Ben and Cu. By the time they arrive home, Saoirse is unconscious so Conor tries to get her to a doctor while Ben retrieves her selkie coat with help from her seal friends and Cu. 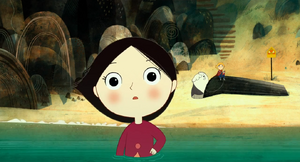 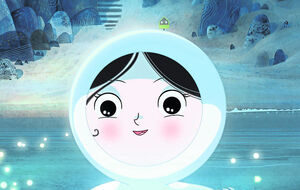 Saoirse as a seal
Add a photo to this gallery

Retrieved from "https://hero.fandom.com/wiki/Saoirse?oldid=2198379"
Community content is available under CC-BY-SA unless otherwise noted.