Cyblade/Shi #1: The Battle For Independents

Learning to be a mom to Hope

Find a suitable successor to Witchblade and until then, control it.

Sara Pezzini is a fictional character, a comic book superheroine starring in the Witchblade series. Sara also appeared in a Turner Network Television live-action feature film and TV series of the same name and she was portrayed by Yancy Butler. She is an NYPD homicide detective whose life changed when she came into contact with a powerful ancient weapon known as the Witchblade, which bestows its wielder with supernatural powers.

As one of the current hosts of the Witchblade, Sara has been granted many unique abilities, including the power and ability to heal herself, to create (often very revealing) armor over her skin (as the Witchblade tends to rip away all of her clothes), to shoot energy blasts, to extend razor sharp tendrils and even winged flight. She has yet to explore the full limits of the Witchblade, and thus does not know what other mystical magical abilities it possesses. When not overly active, the Witchblade can assume the form of a bracelet, allowing her to wear the entity without drawing attention. The Witchblade is a male entity of both light and dark which represents both order and chaos. It is the offspring of the Angelus and the Darkness; as such, Sara does not have complete control over its actions and reactions.

Sara first appeared in Cyblade/Shi #1: The Battle For Independents in 1995. She had wanted nothing more in her life than to be a good cop. As a homicide detective in New York City, life was challenging enough, but for Sara, those were simpler times. While on an undercover case at the Rialto Theater, both she and her partner, Michael Yee (named Danny Woo in the TV series), were mortally wounded. At this same theater was a man named Kenneth Irons, who had brought a gauntlet known as the Witchblade. Irons was in search of the secrets to unlocking his full power and ability. While Sara lay dying, the Witchblade made his choice to include her in the long line of women that he has shared his power with. The entity healed Sara's wounds and allowed her to survive the resulting confrontation. Since then, she has seen many things she never knew existed, fought creatures that have no place on Earth, and longed for the days of a typical NYPD detective. But she continues her struggle with the Witchblade, believing that she can do more good with the entity than without. So the battle for control continues, as Sara learns more about this entity and struggles to stem his violent nature.

Some of Sara's allies include the Magdalena, Lara Croft, Vampirella, and Jackie Estacado. Two crossovers pitted her against Wolverine and the titular creatures from the Alien and Predator franchises. In the comics recently, Sara has been through a grueling ordeal fighting off a giant demon (a false "god" summoned by a group of priests), in the midst of which her partner, Jake McCarthy, was left wounded. Before losing consciousness, Jake professed his love for Sara and told her that he always knew about her double life. He now remains in a coma, and Sara has had to deal with a nosy new partner, Patrick Gleason, who has already discovered many of her secrets. Gleason saved her life and it had begun to look like they may become more than just partners, but their sexual date was interrupted when Ian Nottingham abruptly returned to Sara's life.

After a minor crisis that led to the death of Sara's good friend and loyal partner; Jake, Sara discovered she was pregnant. Sara was completely confounded at how this occurred – due primarily to the fact she has not had sex in over a year. Sara, initially feeling she was not ready to be a mother, nevertheless decided to keep the baby, but decided as a result she could not keep the Witchblade as well. Sara relinquished it on to Danielle Baptiste, a young woman she had recently met who was its next chosen bearer.

When she was due to give birth, the father of her child was revealed – it was Jackie Estacado, who, possessed by the Darkness itself, was driven to seek out and have sex with Sara's comatose body, and, with Jackie's body used for the necessary biology, leading to the conception of their baby – a child to upset the balance between the dark and light. Sara gives birth to a baby girl, but is on the verge of death. Danielle then ends up sharing part of the Witchblade with Sara, which saves Sara's life. Hope, Sara and Jackie's daughter, drives off the Angelus and in the end Sara, now wielding half the Witchblade, and her friends return to their lives. This pregnancy has caused an attraction between Jackie and Sara that has manifested itself as romantic and even sexual.

Later, a major conflict erupts between Sara and Danielle, with Sara under the control of the Darkness portion of the Witchblade. During this time Sara became increasingly irrational, angry and would often mistreat the people around her, however she did display more increased control over the entity demonstrating abilities usually associated with the Darkness (summoning dark-based objects, creating Darklings etc.). Manipulated by an old enemy of the Curator, Sara re-took all of the Witchblade in a battle with Danielle. However Sara was saved when Danielle was chosen as the next Angelus host and cleansed her of the Darkness' influence, restoring Sara to her former self.

While Sara attempts to redeem herself for her crimes under the Darkness-half of the Witchblade, an Internal Affairs agent named Phipps discovered the truth about the Witchblade through Jake McCarthy's diary. He confronted Sara, demanding that she either resign as a detective or give up the Witchblade if she doesn't want to be exposed. Sara chose the former. She then moves to Chicago, working as a private investigator.

Top Cow has stated Witchblade will end in issue #185, which will mark the end of Sara's story as wielder of the Witchblade and she will attempt to find a suitable successor.The realunch had a new user named Alex Underwood and Sara herself will appear in the upcoming Darkness relaunch as a supportin character alongside Jackie.

Sara is a strong, determined, and mature woman. One of her defining characteristics is her black-and-white view of the world and of people, something that many characters in the series have called her out on.

Sara has above average intelligence, and is very athletic and physically strong. She has police training in hand-to-hand combat, weapons, tactics and criminal investigation.

Also she is the current host of the Witchblade, she has been granted a wide array of supernatural abilities; she can form various weapons (swords, other stabbing weapons, hooks, chains, shields), jump to heights slightly higher than humans and perform other parkour feats, generate a full body armor in order to protect her and increase her strength to abnormal levels that exceed 500 pounds (should the situation arise, she can also form wings allowing flight), shoot energy blasts from the hand or sword, fire projectile darts, and whip-like grapples to attack or to climb. The Witchblade is also an excellent lock pick, and can heal wounds, even mortal ones. The Witchblade can re-animate the dead, empathically show the host scenes of great trauma, and allow the host to relive experiences from past hosts as dreams. The Witchblade is also known to be able to damage incorporeal beings and is capable of slaying other-dimensional entities and immortal deities (such as Bastet). It also has the ability to control and manipulate the elements.The witchblade can slow, stop, and even turn back time. 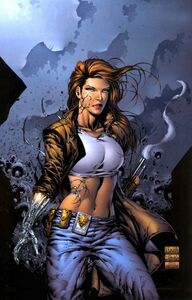 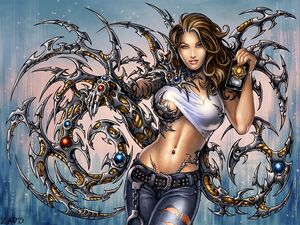 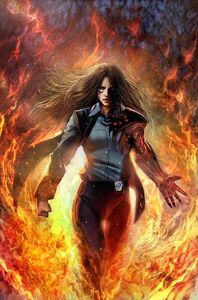 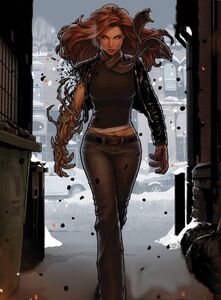 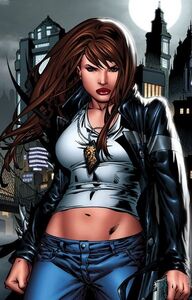 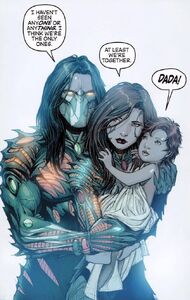 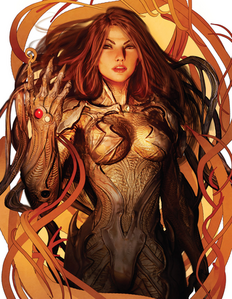 Add a photo to this gallery
Retrieved from "https://hero.fandom.com/wiki/Sara_Pezzini?oldid=1680240"
Community content is available under CC-BY-SA unless otherwise noted.