NOTE: This article is about the incarnation of Sarabi from the 2019 movie. The mainstream version can be found here: Sarabi (Disney).

Queen of the Pride Lands (formerly)

Sarabi is a supporting character in the 2019 remake of The Lion King. She is the wife, later widow, of Mufasa, the mother of Simba, the sister-in-law of Scar, the mother-in-law of Nala and the former Queen of the Pride Lands. She is based on the character from the 1994 film of the same name.

She was voiced by Alfre Woodard, who also voiced Plio in Dinosaur.

Not much is known about Sarabi's early life prior to the event of The Lion King, aside from the fact that Mufasa and Scar had a fight and competed for her affections to which Mufasa prevailed. Then she married Mufasa and became the queen of the Pride Lands.

At first, Sarabi is seen during the opening scene where she has her infant son Simba cradled in her arms. Then she greets Mufasa and watches Rafiki smear a mark on Simba's forehead before presenting him to the other Pride Land animals. Later, she is mentioned by Scar during his confrontation with Mufasa where he says that he has tremendous respect for her.

Months later, when Zazu tells Mufasa about the hyenas in the Pride Lands, Mufasa asks where Sarabi is, to which Zazu tells him she’s leading an attack on the hyenas. Later that day, Sarabi is seen with Sarafina and Nala when Simba arrives to come with him. Sarabi gives Simba a bath before allowing him and Nala to depart, but as long as Zazu goes with them.

The next day, Sarabi and the rest of the pride are told by Scar about Mufasa and Simba being killed in a wildebeest stampede in a gorge, with Scar saying that he wished he could have gotten to the gorge in time to save them. Afterwards, Scar becomes king and allows the hyenas into the Pride Lands.

Years later, Sarabi is shown to be queen of the Pride Lands still. And then, she is considered to be the true ruler by the other lionesses. Zazu arrives to tell Sarabi about Scar and his hyenas hunting the last of the herds living in the famine-ridden Pride Lands now, but he gets chased away by two hyenas named Kamari and Azizi, who threaten to eat him if he comes back, thus revealing that Zazu is no longer welcome to Pride Rock by Scar. Despite urging from Nala to move the pride elsewhere, Sarabi declines, saying that the Pride Lands is their home. Just then, the hyenas' leader Shenzi tells Sarabi Scar wishes to see her.

Sarabi approaches Scar, who reminds her that long ago she chose Mufasa over him to be her mate. Then he tries to persuade her to be his queen and "move on" from Mufasa, but Sarabi declines, resulting in an infuriated Scar to declare that the lions will eat after the hyenas, who don't leave much leftovers. One night, Sarabi sees Nala fleeing the Pride Lands to find help.

A few days later, Scar tries to convince Sarabi to become his queen one more time. When Sarabi refuses and condemns Scar for his poor leadership once more, the two lions fight. They stop when they see another lion appear. At first, Scar believes that the lion is Mufasa, only for the lion to be revealed to be an older Simba. Sarabi is overjoyed to see her son alive and well, but she becomes shocked when Scar has Simba claim to cause Mufasa's death. As Scar forces Simba off Pride Rock, he reveals that the scene reminds him of Mufasa's death where he saw the same look of fear in Mufasa as Simba had there before revealing to Simba that he killed Mufasa. After Simba manages to climb back up Pride Rock and confront Scar for his actions, Scar tries to defend himself. However, Sarabi reveals that she overheard Scar talking about seeing the look of fear in Mufasa and questions him on how he could have known that if he told the pride that he did not make it to the gorge in time. Realizing that he has been caught out, Scar orders the hyenas to kill the pride.

Sarabi partakes in the battle against the hyenas. After Simba defeats Scar, Sarabi watches her son climb up Pride Rock and roar in victory as he takes his rightful place as king.

Sarabi is not seen again after this, but it is possible that she is among the lionesses watching the presentation of Simba and Nala's cub at the end of the film. It is unknown what happened to her afterwards.

Sarabi and Mufasa watching Rafiki presenting Simba to the animals of The Pride Lands in the 2019 remake of The Lion King. 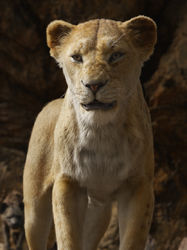