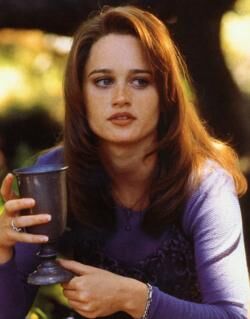 Sarah Bailey is the main protagonist of the 1996 witch movie, The Craft. She was played by Robin Tunney.

Sarah Bailey, a troubled teenager, has just moved from San Francisco to Los Angeles with her father and stepmother. At her new Catholic school, she forms a friendship with a group of girls rumored to be witches, Nancy, Bonnie and Rochelle. At the same time, Sarah becomes attracted to the popular Chris (Skeet Ulrich). Bonnie, Nancy and Rochelle worship a powerful deity named "Manon". Sarah exhibits supernatural powers from the onset of the film, and her new friends believe that she will complete their coven, making them all powerful.

When Sarah is harassed by a vagrant with a snake (whom she had encountered before in her new house), he is immediately hit by a car to die and the girls believe that together they willed it to happen.

After a date with Chris, Sarah is upset to find that he has spread a false rumor that they had sex, and he treats her disrespectfully in other ways. In response, Sarah casts a love spell upon him, while Rochelle casts a revenge spell on a hateful racist bully Laura Lizzie (Christine Taylor), Bonnie casts a spell for beauty, and Nancy for power.

It very soon becomes clear that the spells have been successful: Chris becomes infatuated with Sarah, scars that Bonnie has on her back miraculously heal, and Rochelle's bully Laura begins to lose her hair. Nancy goes further by causing her abusive stepfather to have a heart attack and die.

Nancy becomes greedy for power and encourages the others to join her in a rite called "Invocation of the Spirit". Upon completion of the spell, she is struck by lightning. Afterward she lacks empathy and begins taking risks with her life and those of others. The spells that the girls have cast soon begin to show negative consequences: Bonnie becomes aggressively narcissistic; Rochelle finds Laura Lizzie traumatized by her baldness and sobbing hysterically; Chris attempts to rape Sarah when she rejects his continual advances.

In retaliation, Nancy uses her power to kill Chris by causing him to fall out of a window to his death because she also lustful toward the young man. Sarah performs a binding spell to prevent Nancy from doing more harm, but this does not work and the coven turns on Sarah. They invade her dreams, threaten her and use their powers of illusion to make Sarah believe that her father has been killed in an accident. They taunt her with visions of swarms of insects and snakes and try to persuade her to commit suicide, before Nancy cuts Sarah's wrists herself. Sarah successfully "invokes the spirit" and is able to heal herself and fight back. Sarah scares off Bonnie and Rochelle and defeats Nancy, binding her power to prevent her from doing harm. As the film closes, Nancy is committed to a psychiatric hospital, and Sarah is the only coven member who does not lose her powers.

Sarah is a troubled new girl in town who, in spite of gifted with potent supernatural powers, wished to have normal life and once had emotional issues that led her once attempted to commit suicide (which failed because she survived). But she found it difficult because her first attempt to befriended Chris backfires with the jock spread false rumors about her that made her become ridiculed by others, until she found solace upon befriends with other losers named Nancy, Bonnie, and Rochelle, who like her, also witches.

In spite of the coven began to meddling with harmful and negative forms of witchcraft, only Sarah who remained cautious with what they have gotten themselves into and only witch who taking the consequences of her actions more seriously, particulary since bewichment she put on Chris eventually degenerated him into lustful pervert. Unfortunately, her fellow witches neither symphatetic with her nor taking negative consequences of their actions as much as her. Not only that, something worse happened when they invoked Mamnon for more powers, the process caused terrible storms that sent dolphins and whales washed ashore to their deaths. Seeing Nancy went insane and drunk witj power that she killed Chris in cold blood ultimately the last straw, as Sarah decided to bind Nancy by stripped her from her powers to prevent her to cause more harm.

Everything that Sarah has gone through, including having her coven turned against her and have them forced her to commit suicide with illusory snakes and spiders that swarmed for her and psychologically tormented her with illusion of her father killed in a plane crash, and discovered her fullest potential through aid of Memnon and Lirio, contributed her development into most powerful and wisest witch she is now. In spite of what her coven did to her, Sarah gave them merciful punishment by stripped them from their powers instead of killing them in revenge because she still considered them as her friends and aware that Bonnie and Rochelle's involvement in tormenting her at climax was because Nancy blackmailed her to do so instead of loyalty. The latter proved to be true as when Sarah use her newfound powers to drove Rochelle and Bonnie away with illusions of their worst fears, they choose to retreat instead of following Nancy further. In her final battle against Nancy, Sarah used her powers to passively counteract her more aggressive advesary before incapacitated her with single but powerful counterattack before bind her. Upon seeing that Rochelle and Bonnie still not taking their lessons to their heart, Sarah warned her friends to not to ended up like Nancy, revealing that Nancy's lust of power have degenerated her into a lunatic.

Retrieved from "https://hero.fandom.com/wiki/Sarah_Bailey?oldid=2051933"
Community content is available under CC-BY-SA unless otherwise noted.