Captain of The Syren
De-Facto Ruler of Bilgewater

Gambling
Plundering
Getting out of trouble

Sarah Fortune, better known as Miss Fortune or the Bounty Hunter, is a heroic playable champion in the multiplayer online battle arena game League of Legends, and one of the main protagonists in The Ruined King.

A renowned captain and the de facto leader of the lawless port city of Bilgewater, Miss Fortune has made a name for herself by blowing up the flagship of former reaver king Gangplank while he was still aboard; an act of vengeance for him murdering her family. Cunning and ruthless, Miss Fortune has proven herself to be a deadly opponent who is not to be underestimated.

The 29th champion added to the game, Miss Fortune was released on September 8, 2010. She is often played only in the bottom lane.

While her original voice actress is unknown, she is currently voiced by Laura Bailey.

Born the daughter of the legendary gunmaker Abigale Fortune, Sarah Fortune lived a happy childhood on an island settlement. Her mother's craftsmanship was unmatched, which attracted wealthy merchants from across Bilgewater. However, it also attracted the unwanted attention of those who would use her weapons for a darker purpose, such as the pirate captain Gangplank, a brutish reaver with a growing, frightening reputation.

Under the reaver king's threats, Abigale spent the next year crafting Gangplank two of the finest pistols she had ever created. However, when Gangplank attempted to take the pistols by force, the resulting struggle ended with the weapons in Gangplank's hands. He gunned down Sarah's parents before shooting her as well, and left them all for dead in the burning remains of Abigale's workshop.

When Sarah awoke, she found herself gravely injured. Her parents were dead and the pistols were broken, and though her wounds would heal with time the nightmares would continue to haunt her for years. Swearing vengeance, Sarah rebuilt her mother's pistols and began to hunt down the notorious reaver king.

To prepare for their next encounter, Sarah became a bounty hunter, killing and capturing anyone whose face appeared on the board. Within a week, Sarah had collected every single bounty, earning a reputation in the port city as "Miss Fortune". Sarah knew that Gangplank would pay no notice to her growing reputation, and as the years passed her exploits rose from impressive to legendary. By killing its captain, Miss Fortune even took control of the ship known as the Syren, which would elevate her from a simple bounty hunter to a pirate captain in her own right.

Despite this, Miss Fortune knew she could never match the unstoppable power of Gangplank head on, and even if she could manage to kill him, it would not be enough to satisfy her. She wanted Gangplank to be crushed and humiliated. Collecting all her allies and resources, she formulated a plan to overthrow the reaver king of Bilgewater once and for all, utilizing numerous layers of politics and deception to destroy Gangplank's ship and leave him for dead in the sea.

With the reaver king gone, the other captains of Bilgewater struggled for control, leading into a lawless age in the port city where many innocent civilians were caught in the crossfire. To end the violence, Miss Fortune filled the vacuum and brokered a truce between the warring factions, solidifying herself as the new de facto ruler of Bilgewater.

The peace holds, but like all things in Bilgewater, Miss Fortune knows it's only temporary. To maintain it, she must impose order on the gangs and pirates of the port city while not adopting the many traits she hated about her predecessor; a difficult balance that only time will tell if it can be sustained.

Captain Fortune, the ruler of Bilgewater.

Miss Fortune as she appears in Legends of Runeterra.

Miss Fortune on her ship, the Syren.

Captain Fortune as she appears in Burning Tides.

Miss Fortune and her team in Ruined King: A League of Legends Story. 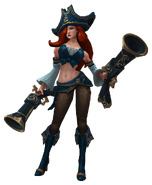