Outdoing James in publishing articles for their newspaper

To get the best story possible for her newspaper (formerly)

To help the colonists in their battle for independence

Teenager
Defector
Sarah Phillips is one of the main characters in the historical cartoon Liberty's Kids. She is a smart 15-year-old girl from England who traveled to the American colonies to expand on her experience in becoming a successful journalist.

Unlike the other main characters, Sarah started out as a British loyalist, who believed that the colonies should stay loyal to the king without going to conflict. When that fails, she is forced to endure the course of the American Revolution. Overtime, her viewpoint of the war begins to change, and eventually, she believes that Britain is in fact oppressing the colonies, and declares herself a patriot to the American cause.

She is voiced by Reo Jones.

Sarah has fair skin and long red or orange hair she usually keeps tied back in a ponytail which is one blue scrunchy except for one strand, which hangs about her face. She has green eyes and is, being a British redhead, quite pale. She is slightly shorter than James for the length of the series.

Almost every day, Sarah wears a dress with a white or light blue bodice, long sleeves, a square neck, with a gold necklace and a dark blue and light blue layered skirt that covers a white skirt and has black shoes with buckles on it.

Sarah also has a shorter-sleeved formal gown, also blue, but with layered pink skirts and a blue and pink bodice. Her hair is the same. She wears this in the episodes "Sybil Lundington" and "Allies at Last."

Sarah dresses up as a boy once, putting her hair up into her hat and wearing clothes much the same as James' but in brown and gray.

Sarah is an ambitious teenager who wishes to become the best journalist the Pennsylvania Gazette. She often times is shown to be easily irrupted and gets into feuds with James frequently over whose article will be the published in the next upcoming issue.

Despite this, she has a more mature and caring side. She cares deeply about her friends and views forms of human suffering (such as slavery) with disgust. Having a strong moral conscience, she always tries to do what is right.

Initially, Sarah is a loyalist, and devotes her loyalty to King George III and Great Britain, she believes that the colonists are nothing but a nuisance that believes that the only way they can resolve their problems with the British monarchy was to cut ties and go to war, when they should in fact resolve it through more mundane ways while staying loyal to the King.

As the series progress however, she learns that Britain is truly oppressing the Americans in ways ranging from quartering into their homes without the owner's consent to abducting innocent bystanders and forcing them to join the Royal Navy. She comes to the conclusion that the American's cause really is noble, and she begins to support it.

Sarah arrived in the colonies in 1773, where her ship was to port in Boston Harbor and she was to meet Benjamin Franklin, who would escort her to his publishing house in Philadelphia and begin work as an apprentice journalist. Upon arriving, a group known as the "Sons of Liberty" ransack the boat and throw all of its crates of tea into the harbor. During the chaos, she is unwillingly abducted by James Hiller (a supporter to the Sons' cause and unbeknownst to Sarah, Ben's apprentice) and loses her mother's locket in the process. She tries to fight back at James, with Sarah trying to have him apprehended by the redcoats for his "crime", but changes her mind after seeing that the British at in fact quartering inside residents' homes without the owner's consent.

Eventually, Sarah and James put their grudges aside and make it to Philadelphia without being caught. As a form of apology, James melts his mother's wedding ring (which he salvaged from the ruins of his house), and smiths a new locket for Sarah to replace her old one, to which Sarah greatly appreciates.

Overtime, Sarah and James develop an On & Off rivalry, with James siding with the American cause while Sarah sternly remaining loyal to King George and Great Britain; since both are Ben's apprentices, they eventually begin to compete with each other to create the best story for each upcoming publication in the Pennsylvania Gazette, much to Ben, Moses, and Henri's disapproval.

After the war begins with the Battle of Lexington, both James and Sarah travel to the location and interview soldiers from both sides of the conflict, which Sarah believes that the story must include to remain neutral in point-of-view. Both are ultimately horrified after seeing many soldiers from both sides being massacred after a misunderstanding shot from an unknown musket. After both return to the workshop, she is surprised to learn that Ben put both her and James's stories into the paper, who believe that every reader should have an understanding of what is happening from both sides' points of view.

Over the course of the war, Sarah's view about which side she supports begins to shift. Although she remains loyal to the British at first, she starts to have second thoughts after learning that in addition to quartering without consent, the British are also abducting Americans unwillingly and conscripting them into the Royal Navy, that they are burning down American's homes (except for "Tories"), and are attempting to spy on the Americans to end the war much more quickly. She also learns from James at one point that he is kidnapped by a Loyalist blacksmith and locks him inside a nearby stable to prevent him from delivering a message.

At one point she also fakes to two British sailors that James is her fiance and persuades them to release him so that the two could "be married" before James "willingly" joins the Royal Navy, to which James plays along with. In doing so, the two begin to harbor romantic feelings for each other, before putting it aside.

Eventually, the British capture Philadelphia and one of the Lords makes his residence inside the Pennsylvania Gazette, their she "spies" on the British and listens to them mock the Americans, calling their cause foolish while the others laugh on. Sarah on the other hand is annoyed by this claim and openly objects, calling their cause noble, only to be laughed off by the rest of the loyalists.

Eventually, the British leave Philadelphia after Washington's army makes its way towards the city. During this time, Sarah becomes homesick and decides to leave for her home in Britain to see her mother once more. She says her goodbyes to her friends and embarks on a ship.

During the voyage back from Britain, Sarah comes across a Scottish prisoner and supporter to the American struggle named John Paul Jones, who was arrested by the British while trying to escape from them. John convinces Sarah to release him and the rest of the prisoners, to which she agrees while under the disguise of a boy. Upon escaping the hold, Sarah and John, find themselves surrounded and seemingly captured by the British soldier on board the ship. One of the sailors, who happens to be a relative of Sarah tries to convince her to side with the British. After a moment of consideration, Sarah decides to side with John and declares herself a patriot to the American cause. John and his forces ultimately overpower the British sailors, and parts ways with Sarah soon afterwards.

Sarah eventually returns to America, now a full patriot towards America, and reunites with her friends, however the warm reunion is short as the war was still continuing.

Overtime, Sarah eventually makes it to Yorktown, where the final major confrontation between the the Americans and the British takes place. With the help of an African-American double agent named James Armistead, she concocts a plan to fool General Cornwallis into believing his army will win the battle, the scheme works the American are given the major advantage in the battle. Despite this however, the battle ends up turning brutal and nearly costs Moses' brother Cato his life. Nonetheless, the Americans are victorious, and soon afterwards the war ends, with the Americans proclaiming victory.

After the war, James and Sarah reconcile over their childish feuds, and remain in Philadelphia. At one point, Sarah travels up to New York to visit a friend named Mrs. Ratcliffe, whom she met earlier in the war, and learns that she is moving to Nova Scotia after learning that the British surrendered to the American (whom she still considers a bunch of ruffians). She also learns that Cato is also moving to Canada in order to escape slavery.

Eventually, Ben Franklin returns to America, where he brings along Sarah's mother (who was also a patriot to the American cause during the war), to which Sarah is overjoyed to see after hearing that she is deciding to settle in America, to which she and her daughter have proclaimed as their new home, however she in turn says goodbye to Henri, who has chosen to move back home to France with the Maquis de Lafayette.

Sarah later joins James while witnessing what the new U.S. Constitution will include. They are shocked to learn that the new constitution, while establishing basic rights to most American citizens, does not include the abolition of slavery, which angers Moses. Ben Franklin predicts that this issue will in turn lead to another war in the U.S., foreshadowing the American Civil War that would occur almost 90 years later.

Sarah is last seen with James, Ben Franklin, and Moses as the four of them look up to the steeple of the Pennsylvania State House (now renamed Independence Hall), witnessing the Liberty Bell ring, before leaving in satisfaction. 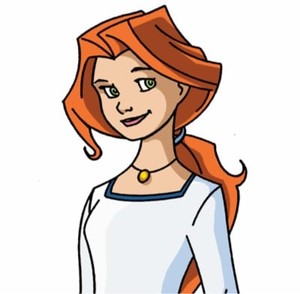