Sarasvati (or Saras for short) is one of the main protagonists of the light novel and anime series Is This A Zombie? She is a vampire ninja and Seraphim's superior, who lives in the human world as Kirara Hoshikawa.

She is voiced by Aya Goda in the Japanese version of the anime and Caitlin Glass in the English version.

Sarasvati is an attractive girl with long black hair and piercing crimson eyes. She's usually seen in a simple school uniform throughout the series, and occasionally wears a cool expression with a slight frown on her lips. Although not as endowed as Sera or Yuki, Saras still holds a considerably attractive body in comparison to some of her other peers at school like Taeko. Her casual clothes consists of a long-sleeveless cardigan over a white, stylishly frilled tank top with a black ribbon decorating the chest region, and a simple red skirt and boots. Aside from these clothes, Saras doesn't appear to wear any additional accessories.

Sarasvati is a very serious individual who exudes a great deal of authority and iron will. She shows a level of impatience and aggression when it comes to her goals as shown in her attempts to get closer to Ayumu and the way she handles her subordinates like Yuki who she wanted to dance in her concert. Despite being a firm enforcer and follower of her village's traditions, Saras is rather open minded in that she willingly embraces change to the status quo of the vampire ninjas by becoming an idol. Saras is also rather sadistic in some levels, showing a verbally aggressive side to her when she assumes her idol-persona, Kirara Hoshikawa, as she addresses her many fans during her concerts.

Her seemingly cold appearance aside, Saras possess a measure of kindness and understanding in her, and only does what she needs to do with good reasons. This quality of her's is displayed when she assists/defends Sera, Haruna and Ayumu from Yoruno during Eucliwood 's disappearance. Her kindness further extends to her subordinates such as Yuki, who she allowed to go to the mixer party that Ayumu was setting up for Kyoko.

Later, she falls in love with Ayumu Aikawa (to be more precise love at first sight when she sees his butt and curve line). She gradually shows a much softer side to her personality towards Ayumu as the series progresses, affectionately addressing him as "My Darling," and even openly claim her interest in him. One such example was when she confessed to Ayumu that her love for him will last forever and continues to ensure him that she will treat him right if no one else will. It should be noted that this was addressed so aggressively that it came off as some sort of sadistic ultimatum to Ayumu, leaving him fearfully uncertain as to how he should interpret her confession. Regardless, however, Saras is shown to get along well with Ayumu despite their initial interactions and so are in good terms with each other by the end of season 2. 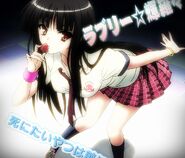 Saras being sexy eating a strawberry
Community content is available under CC-BY-SA unless otherwise noted.
Advertisement