Fusion of Ruby,Sapphire, and Pearl
Guardian

Sardonyx is the main deuteragonist in the Cartoon Network series Steven Universe. she is a fusion form of Pearl and Garnet. She made her debut in "Cry for Help". She is also seen briefly in "Friend Ship".

She is voiced by Alexia Khadime.

Sardonyx is a very tall woman that has vermilion skin and pale peach/apricot-colored hair, that is styled into a tetrahedron with very rounded corners. Her torso and legs greatly resemble Garnet's but have less mass. As a fusion, she has four arms and inherits the same locations of her gemstones as her fused cooperators. She wears a black, tailcoat tuxedo-leotard with a tangerine bow tie and a small, black star on her chest. This tailcoat comes from Pearl's sash ribbon. The underside of the tail of her tailcoat is the same shade of tangerine as her bow tie. She wears two-toned, mauve-gray leggings under crimson tips surrounding the top part of her feet. On her first set of arms, she wears white gloves, exposing her hands except a white covering on her middle fingers like Garnet's. On her second set of arms, located on her abdomen, she wears white gloves that closely resemble Sapphire's gloves that extend to her elbows.

She wears round shades that resemble those of Alexandrite's, but are slightly transparent and tinted with a dark reddish-ginger-like color, which reveals that Sardonyx has four eyes, two on the bottom which are large and round, and two on the top which are thin, small, and narrow. Her top pair of eyes is magenta, while the bottom pair is crimson-colored. Sardonyx appears to have a small gap between her front teeth and plump lips. Her face is rather triangular, and her feet have small, bright pink diamonds on them.

Sardonyx, due to having a combination of Garnet and Pearl's personalities, acts theatrical but, at the same time, she can keep up an intelligent conversation. She usually has dramatic behavior, as shown as she talks to her friends like their her audience. She seems to have a great wit, as shown when she laughs at her own jokes. Also, Sardonyx acts rather snarky. This is shown when she remarks in a very pompous and comedic manner.

Sardonyx usually carries a cheerful attitude and thinks very highly of herself. She can be somewhat cocky at times. As a result of her cockiness, she occasionally forgetting about others' feelings. However, Sardonyx can be serious at times. For example, in "Friend Ship," when Garnet and Pearl fuse to escape a crushing deathtrap, she breaks out without hamming it up or sticking around any longer than necessary.

When she's pushed into battle, Sardonyx acts graceful and accurate. Yet powerful and rather playful, as shown as she messes with her opponents or audience with tricks and jokes. However, she is quite tactical and tries to make things perfect by thinking things up before acting.

The Crystal Gems head to the Communication Hub, only to discover that Peridot has repaired the structure in an attempt to contact Yellow Diamond. Soon, Garnet decides to fuse with Pearl, forming Sardoynx. She cheerfully greets him while ignoring an annoyed Amethyst. Sardonyx soon forms her hammer and disables the hub. She unfuses after finishing. Later, the Crystal Gems observe Peridot's message being broadcasted again, and go back to the hub where Sardonyx continually dismantles the structure.

During their pursuit of Peridot inside a derelict Gem spaceship, the Crystal Gems fall into a trap. Garnet and Pearl are confined in an enclosed pit which gradually contracts. They eventually fuse together, and Sardonyx drills out of the pit with her hammer, after which she unfuses.

Back to the Moon

On the Moon Base, Doc and her squad of Rubies fuse together to fight the Crystal Gems after discovering their deception. Steven opens the airlock on the base, pulling the fusion partially through the door. Garnet and Pearl quickly form Sardonyx, who smashes her hammer into the Ruby fusion, forcing her to unfuse. As the Rubies are sucked out into space, Sardonyx and Amethyst watch in horror as Eyeball drags Steven out with her.

At the Beach House, Steven and Amethyst fuse into Smoky Quartz to show Garnet and Pearl. The two Crystal Gems are surprised and overjoyed. As Smoky begins to demonstrate their yo-yo tricks, destroying parts of the house in the process, Garnet and Pearl fuse into Sardonyx. She is excited to meet Smoky, and suggests that they need a bigger "stage" to get to know each other. She takes them to her room in the Crystal Temple, where she hosts her show, Sardonyx Tonight. At the start of the show, Sardonyx asks Smoky questions, hoping to learn more about them and their abilities. Smoky admits that they "ain't exactly a deck of cards," not having much to talk about other than their yo-yo. Determined to learn the full extent of their repertoire, Sardonyx begins the next part of her show during which she has Smoky perform a series of tests. Smoky is compared to the other fusions in their tests involving archery, strength, and fire breathing. Sardonyx is disappointed to see them perform poorly on all the tests, after which Smoky begins to disparage themself. As she observes Smoky's self-deprecation, Sardonyx realizes that she had ruined their initial plan to impress Garnet and Pearl. She unfuses in dismay, prompting the room to begin falling apart.

Sardonyx, like the rest of the Crystal Gems, has a positive opinion of Steven, as she interacted with Steven frequently, is happy to meet him, embraces him, and calls him a "sweet little charmer." Sardonyx has shown that she is quite fond of Steven, telling him jokes and performing tricks. She even compares herself to the more destructive Sugilite to impress him even more. While doing this, she shows off her anatomy manipulation, precision with her weapon, and names of the qualities about herself that counter Sugilite's.

As a result to Amethyst disliking Sardonyx, Sardonyx usually ignores her. She that boasts that she has her better qualities around Amethyst, as shown in "Cry For Help".

Despite this, in "Know Your Fusion," Smoky Quartz doesn't seem to dislike Sardonyx, showing that Amethyst might have gotten over her dislike.

Sardonyx first meets Smoky Quartz after Steven and Amethyst fuse to show Garnet and Pearl. Sardonyx takes them into her room in the temple where she hosts her late night talk show during which she interviews Smoky to learn more about them. She has them play games to try to find out what their special abilities are. This shows that, while she is interested in Smoky, she is very self-centered in her treatment of them, which causes Sardonyx to de-fuse when Pearl and Garnet realize how they were acting.

Sardonyx and Jasper have never met before, but, she mentioned her in "Know Your Fusion," where she calls her a trouble maker. This means that Sardonyx doesn't care about Jasper at all.

War Hammer Proficiency: Sardonyx can combine Garnet's gauntlets and put them on the end of Pearl's spear facing inwards to make a hammer. Her use of the war hammer is methodical in approach. She uses precise, keen strikes on specific areas to inflict the most damage while also reducing the amount of effort needed to take down a structure or opponent. She describes herself, and therefore her style of combat, as "specific, intelligent, accurate, faultless, elegant, controlled, surgical, graceful, and powerful!" (But yes, occasionally, she is known to smash). 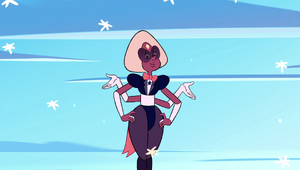 Sardonyx debuts in "Cry for Help". 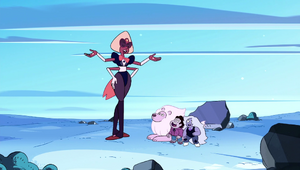 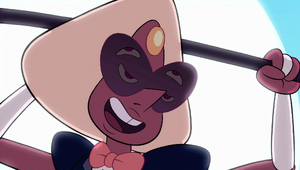 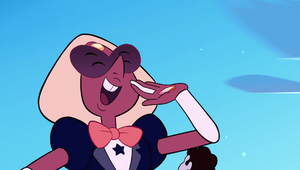 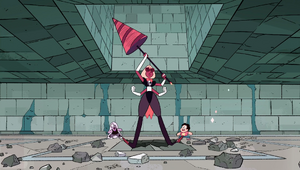 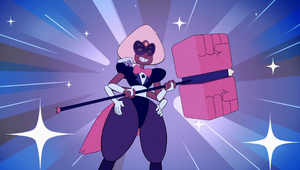 Sardonyx in "Back to the Moon". 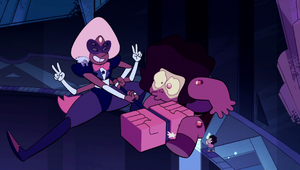 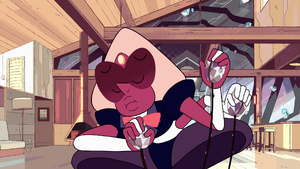 Sardonyx stop to destroy his stuff. 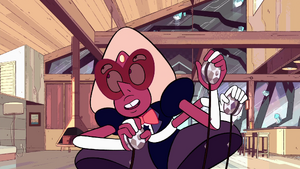 Sardonyx in "Know Your Fusion". 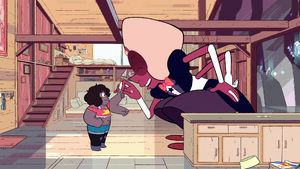 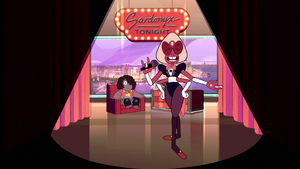 Sardonyx's Room.
Add a photo to this gallery 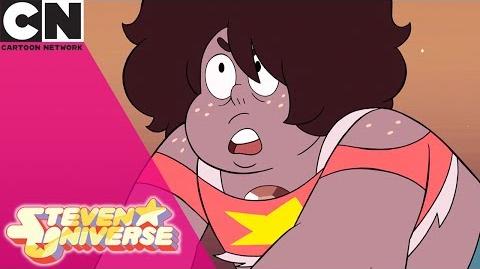 Retrieved from "https://hero.fandom.com/wiki/Sardonyx_(Steven_Universe)?oldid=1697340"
Community content is available under CC-BY-SA unless otherwise noted.