Aid Quan Chi with his goals (formerly).
Aid Sub-Zero to stop Quan Chi and the forces of Netherrealm by any means possible.
Return Liu Kang and the other Revenants to normal.
Free the Netherrealm from dark forces.
Help the Special Forces protect Earthrealm.
Fix Raiden's mistakes.
Use the god-like powers of Blaze to become a Cryomancer & a member of the Lin Kuei.

Sareena is a overarching heroine from the Mortal Kombat video game series. She is one of Quan Chi's three personal assassins ordered to kill Sub-Zero before he reached Quan Chi. She is a major antagonist-turned-deuteragonist of Mortal Kombat Mythologies: Sub-Zero, and a minor character in Mortal Kombat: Tournament Edition, Mortal Kombat: Armageddon, and Mortal Kombat X.

In Mortal Kombat Mythologies: Sub-Zero, she is "fractionally faster and a more accomplished fighter than her fellow assassins." After being spared by Sub-Zero, she assists him in defeating Quan Chi. After expressing her desire to escape the Netherrealm with him, she is shot in the back by Shinnok.

As it is later revealed in Mortal Kombat: Tournament Edition the attack destroyed her human form and that her essence was then banished as punishment for her betrayal.

After years of torture, Sareena escapes the Netherrealm in her human appearance before Mortal Kombat: Deadly Alliance, during which she encounters the younger Sub-Zero; the brother of the one she met before. Feeling he owed her for helping his brother, Sub-Zero grants her sanctuary with the Lin Kuei back on Earthrealm.

In Mortal Kombat: Armageddon Sareena follows Sub-Zero into the Netherrealm, saving him from being killed by Noob Saibot and Smoke. After the battle, Sareena loses her human form and returns to her true demon self but not before Sub-Zero was left unconscious, dazed and still confused Sub-Zero attacked and Sareena fled to the depths of the Netherrealm, not wanting to harm him.

However, Noob Saibot, Smoke, and her former master, Quan Chi, who demanded she provide them information about the Lin Kuei, later attacked her. At first, Sareena refused, determined to remain loyal to Sub-Zero.

But Quan Chi then cast his dark sorcery upon her, returning her to her human form and then convincing her that she can never be good and that she is simply a pure evil demon. Swayed by Quan Chi's corruption, she agreed to serve him once again.

In Mortal Kombat: Armageddon Konquest, Sareena, Kia and Jataaka are ordered by Quan Chi to kill Taven, but all three assassins are defeated by Taven.

She also appears in Mortal Kombat (2011) as one of the fighters in the Pit background, usually facing of against Daegon, Reiko, Kenshi or Frost.

Sometime shortly after Mortal Kombat (2011) and in between Mortal Kombat X Sareena became friends with Bi-Han aka Noob Saibot he helped free Sareena from Quan Chi's control. After becoming a good person with the help of Bi-Han the original Sub-Zero Sareena side with Raiden and his allies to protect Earthrealm.

Raiden had seen the demon girl in his visions just like all the other heroes. Although she did take part in the Mortal Kombat tournament facing Frost, Daegon, Kenshi and Reiko in the background. But the thunder god didn't recruit her right away.

After losing most of Earthrealm's warriors to Quan Chi and Noob Saibot helping Sareena Raiden finally approached Sareena and the other heroes who had small roles in his visions. Twenty-five years later after Noob freed her from Quan Chi's magic and after joining Raiden's allies Sareena assisted the heroes in their attempt to save Earthrealm.

In Mortal Kombat X, Sareena assists Jax, Kenshi, and the other Special Forces in their mission to infiltrate Quan Chi's fortress and capture him in the Netherrealm. She advises them that Quan Chi is not at his fullest power without Shinnok.

During the battle between the Special Forces and Quan Chi and his revenants, Sareena fights with the undead Kitana. She is trying to convince her to free away from the corruption, similar to how Bi-Han has done for her.

Unfortunately, her aid failed and was knocked out as a result, only to be saved by Jax. Quan Chi and his revenants escaped. The Special Forces attained severe wounds. Sareena aids the wounded soldiers. When Jax is about to walk to Quan Chi's fortress alone, Sareena warns him that he could die, though this doesn't stop him as he has been killed before.

Although Sareena was neither seen or mentioned in the Story campaign, she only appears in Kabal's non-canon ending, as his wife and them having two children.

Unlike the other native denizens of the NetherRealm, Sareena disliked the harsh environment and sought liberation, something she did achieve by aiding Bi-Han in his quest to thwart Quan Chi and Shinnok.

While it's not shown, but it's implied that whenever Sareena is in her demon form, loses all sense of control over herself.

Because of this, Sareena tries to avoid that from happening. 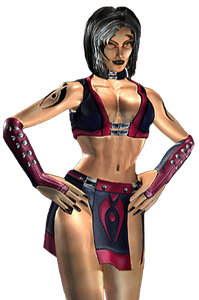 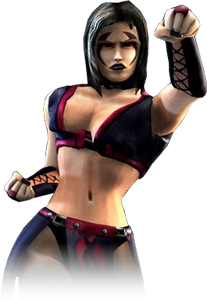 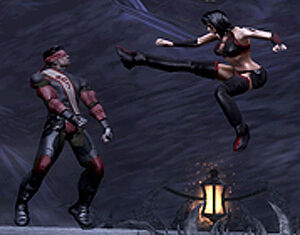 Sareena fighting with Kenshi in the background of the stage Pit II in Mortal Kombat (2011). 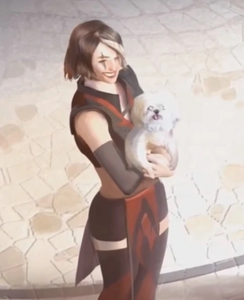 Sareena in the Kabal's ending of Mortal Kombat 11.