Tell Woody and the other toys what presents Andy and Molly are receiving.

Woody (when toys thought that he destroyed Buzz)

Sarge (short for Sergeant) is the leader of the Green Army Men. He lives in Andy's room with the other toys. He makes his first appearance in Toy Story.

He was voiced by the late R. Lee Ermey who also played Gunnery Sergeant Hartman in Full Metal Jacket. In the Japanese dub from the movie, he was voiced by Takashi Taniguchi.

Woody talks to Sarge about finding his pal Slinky. Sarge says that he hasn't found him. He rallies the other soldiers to prepare for Andy's birthday. Later, he helps an injured soldier (stepped on by Mrs. Davis) who can't get up. Sarge's voice is also heard on the Playskool radio. Rex impatiently knocks it over. The next day, Sarge gets angry thinking Woody knocked over Buzz Lightyear. One minute later, Sarge and his men attack Woody with the other toys. Sarge tells the toys to retreat after Andy goes into his room. When Andy moved to a new home, Sarge gave another announcement of Andy opening his new presents.

Sarge gives another alert that Buster and Andy are coming into the room. The toys freeze when Buster comes in. Andy uses them as the workers for Dr. Porkchop when Andy is playing for five minutes. The next day, he tells the toys to disguise as cones to stop the cars from crushing them to get to Al McWhiggin's store. After that, Sarge and his men are listening to Wheezy's song near the end. 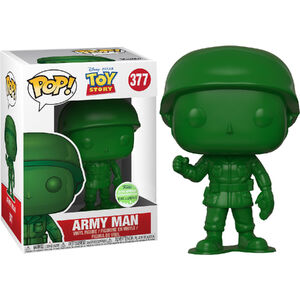 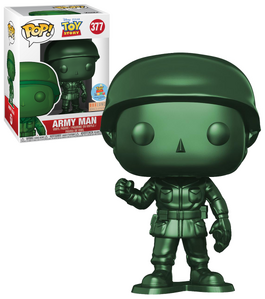 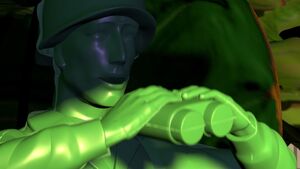 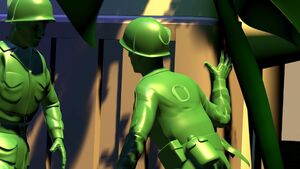 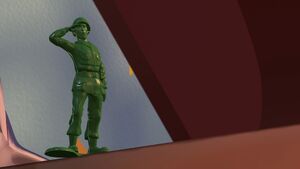 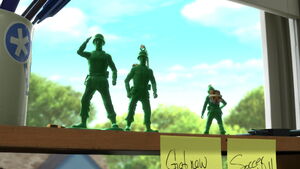