Heroes Wiki
Register
Don't have an account?
Sign In
Advertisement
in: The Legend of Zelda Heroes, Female, Kids,
and 18 more

Saria is a Kokiri girl and Link's old friend whom he regards as a motherly figure. She's also one of the seven sages in The Legend of Zelda: Ocarina of Time.

Beacause of her kindhearted nature, she is very well-liked by the people of her village, especially Mido who developed a deep fondness for her. She is also a friend of Link, an outsider among the Kokiri, resulting in a powerful bond which seems to elicit feelings of jealousy from Mido, causing him to shun Link most of the time.

Saria appears for the first time when Link exits his house after having been summoned to an audience with the Great Deku Tree by Navi. She initially expresses great excitement towards Link's meeting with the Guardian of the Forest, but senses trouble on the horizon and advises him to find the proper equipment just in case. After the Deku Tree tasks Link with the quest to find Princess Zelda, Saria approaches her friend as he is about to leave the forest. Although she appears to be greatly saddened by his departure, Saria assures him that she always knew that he was different from the other Kokiri. She then entrusts him with a Fairy Ocarina as a memento of everything that he is leaving behind. At a loss for words, she watches with a sorrowful expression as he exits through the tunnel leading into the larger Land of Hyrule.

Most of the village considers Saria to be the motherly figure as she gives advice and helps people out. She's the first person besides Link you encounter in Ocarina of Time as she's yelling outside of Link's tree house to wake him up for his meeting with the Deku Tree. Once Link comes back she learns that Link must leave the forest to go to Hyrule as very saddened as she is she knew he was different from the Kokirians. To aid Link on his quest Saria gives him a farewell present that's the Fairy Ocarina in which will aid Link.

Eventually after Link's first three quests he returns back to the forest to see Saria and she hints that the forest will one day become a place of importance for the two of them (foreshadowing the future) and teaches him a song called "Saria's Song" that's used for whenever Link wants to talk to Saria telepathically.

Seven years later Link wakes up after a deep sleep slumber hearing Saria contacting him telepathically telling Link that she's been kidnapped after trying to go to the Forest Temple to return the forests to it's natural state by herself but got caught by monsters. Once Link saves her Saria confronts Link that she is now the Sage of the Forest meaning she can't be with him and as to accept her fate as a sage. After this if Link talks to Mido he'll hint that Saria loved Link as Link as he says she really liked him. Towards the end of the game Saria and the other sages create a bridge for Link to cross to enter the Hyrule castle. 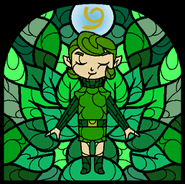