Heroes Wiki
Register
Don't have an account?
Sign In
Advertisement
in: Articles under construction, Selfless, Female,
and 12 more

The little sister of Luca who wants to see it that he doesn’t do anything foolish.

Initially starting off as an NPC, she ascends to playable status when she became a possible summon in the Gala showcases.

She was voiced by Ayaka Asai in the Japanese version, and by Maryke Hendrikse in the English version.

She has long white hair, and cyan eyes. She also has brown markings at the tips of her ears. Her outfit is yellow and white. her waist has a black belt and she wears a yellow and white headband.

She is proficient at the bow, while her normal form has yet to be playable, her Gala and Hunter forms have different skills.

For her Gala form, she can fire Brilliant Bolt, which can deal one shot of 949% flaming damage to directly ahead and extra shots are launched depending on the number of buffs. She will also use Cheerful Assist which can alternate between increased offense or defense.

For her Hunter form, she can use Tactical Retreat which does a 95% hit and another hit of 949% Water damage to lined up foes, it will also strengthen the force strike by 100%, but won’t stack. Her Chaste Rain skill will increase the rate of the user’s force strike charge by 30% for half a minute. 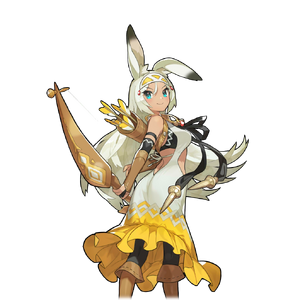 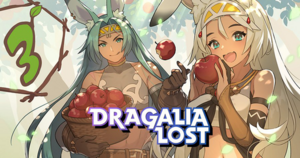 Luca and Sarisse in an artwork celebrating the game's start of service. 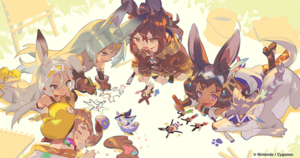 "The Hunt for Harmony" commemoration art