Hybrid
Sarunbi is one of the heroes of the MMORPG game Mini Fighter.

Sarunbi fights against enemies by transforming his body into a beast based on the power of Mother Nature.

His appearance is very similar to humans, but he is not human, and in fact, his identity is a family of the Kiailin tribe who protect the water of life.

The Kiailin, who reappeared with the water of life, do not belong anywhere in the power to prevent the repetition of history that will happen again, but come out of the world to protect the lives of all things.

His style of thinking is closer to animals or fairies than humans, and moves with instincts related to guardianship without thinking about things that are quaint, and he loves and values ​​nature very much. Anyone who harms nature is not forgiven and unconditionally regards it and tries to treat it. Usually there are few words, and only necessary words (objective words) are briefly expressed as if they were acting on behalf of God.

Sarunbi's normal form wears a Native American styled headband with feathers on the right side and he wears no shirt with short white sleeves with prints, red trousers with a brown cloth, bandaged ankles, and around his neck is a necklace with two claws.

His evolved form has purple leggings, a blue, sliver, and gold clawed gauntlets, and a long furred vest with a red cloth.

Unlike other fighters, Sarunbi has the power to shapeshift into a human or beast form. He is skilled with claws and thrusting at his foes. He also can transform his arm into a beast face to bite his foes down. His normal's form powerful skill does several scratches with his claws to strike his foes down and his evolved form's powerful skill shapeshifts back and forth scratching his foes. 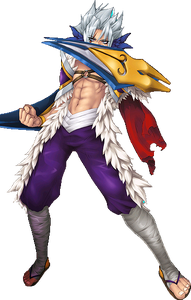 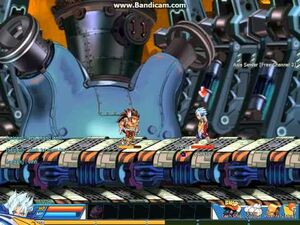 Mini fighter - Power Sarunbi
Add a photo to this gallery

Retrieved from "https://hero.fandom.com/wiki/Sarunbi?oldid=2256482"
Community content is available under CC-BY-SA unless otherwise noted.