Protect the world from Pixy Misa

Pixy Misa (Misao under the influence)

Heroine
Princess Sasami is a main supporting character from the anime series Tenchi Muyo (main protagonist in Magical Girl Pretty Sammy) and in other versions of the show. She owns a pet cabbit named Ryo-Ohki.

Sasami is the second crown princess of Planet Jurai and is the younger sister of Ayeka. They are the daughters of Emperor Azusa Masaki Jurai and the second of his two wives, Empress Misaki.

Sasami has teal-colored hair usually tied in long pigtails with melon pink eyes. In the Tenchi continuities, Sasami also has a upside down triangle birthmarked on her forehead, as a symbol of her status as Juraian royalty.

In almost every incarnation in the series, her personality, background, primary outfits, relationships and abilities change. Her art style is altered more than others, though her basic coloring and structure remaining the same.

Sasami's personality is more mature in the OVA than in the other continuities, and more aggressive in the second TV and the Pretty Sammy spin offs.

Centuries ago, Sasami stowed away on Ayeka's Royal Treeship, Ryu-Ohwhen her older sister decided to run away from Jurai to search for their missing half-brother Yosho seek revenge on Ryoko for nearly decimating Jurai 700 years before. When the princesses arrive on Earth, they get into a battle with the resurrected Ryoko, resulting in all of them crash landing at the home of Tenchi Masaki. Sasami and Ayeka later take to living on Earth with Tenchi's family, along with the cabbit Ryo-Ohki who is the reincarnation of the ship that almost destroyed her planet, and the other women staying in the house. She quickly becomes nearly inseparable from Ryo-Ohki. Sasami refers to the other women in the house as sisters.

Like the other members of Jurai's Royal Family, because of her connection to her Royal Tree, Sasami has an extended life span. While she's seen to be a pre-adolescent girl, she is actually over 700 years old. She is still physically and mentally 8 due to Ayeka having kept Ryu-Oh in suspended animation during their search for Yosho. But Sasami will continue to grow until she reaches a maturity where she can remain for centuries without aging pass her prime. 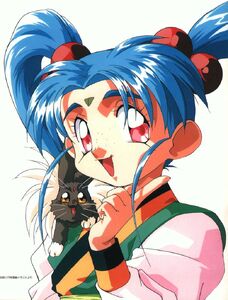 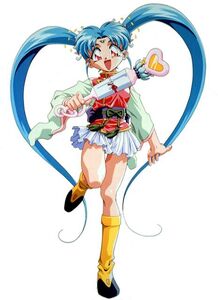 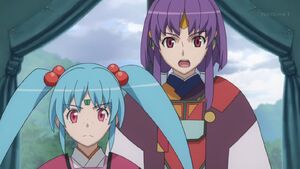 Sasami with her big sister Ayeka. 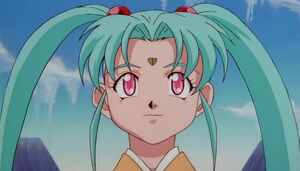 Sasami in Tenchi Forever! The Movie. 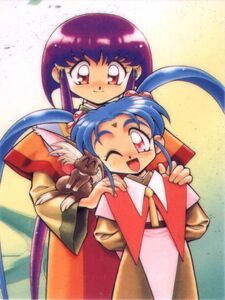 Sasami together with Ayeka and Ryo-Ohki in the manga. 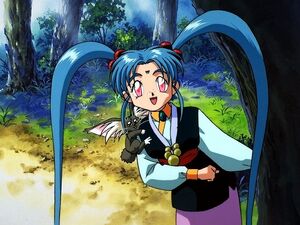 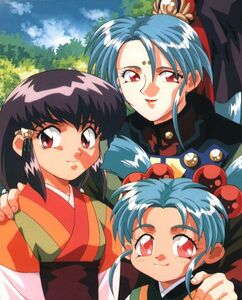 Sasami with her family. 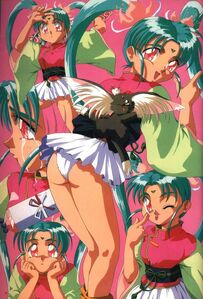 Add a photo to this gallery
Retrieved from "https://hero.fandom.com/wiki/Sasami?oldid=2302071"
Community content is available under CC-BY-SA unless otherwise noted.