Sasha Mason (Bunny Boo) is a main character in Bratz. She is a sassy girl, who is no fear of confrontation or situations and she is very organized; she knows who she is, what she wants, and how to get it! However, she has a bad temper, often when things don't work out for her, which often leads her into trouble. If she gets into that kind of situation, she would open up and apologize. Nevertheless, Sasha cares about her friends, is always ready to stand up for them and no one would dare mess with her friends because she always has their backs! Fashion is a huge part of her life, but music is even more important to her. She enjoys dancing and hip-hop and has a passion for urban styles and street fashions. Overall, Sasha is very confident, determined and when it comes to R&B and hip-hop music perspective, she is known to be a great natural leader. She wants to be a record producer with her fashion line as a career. For Bratz magazine, Sasha is the music editor and leader, as she has been looked up to by the rest of the girls whenever they were in troubling situations. In 2015, she was referred to as the "Queen Bee of the group" on the official Bratz account on Facebook.

She was voiced by Tia Mowry in season 1, and by Dorla Bell in season 2.

Sasha is Black, as her skin is dark brown and it sometimes looks like it is deeply tanned. Her natural hair color is dark brown, but she also dyed with black, gray, red, and blonde hair in bit streaks and hazel eyes.

In the 2005 TV series, her most frequent outfit is her full Funk Out outfit. She has her dark brown hair tied in a double ponytail, a hunter green tank top, camouflage cargo pants with a pink flower pattern on it and a silver beaded belt around, as well as golden hoop earrings and platform shoes similar to Flaunt it Yasmin, but in a darker shade of bubblegum pink. She also has green and brown eyeshadow, matching her eye color. Whenever she's working out, she wears a plain white tank top with her Bunny Boo emblem on it and Cloe's blue Funk-Out jeans with a white belt and her sports sneakers from the Beach Party collection. She retains her usual ponytail, and she wears silver earrings as well as red lipstick. 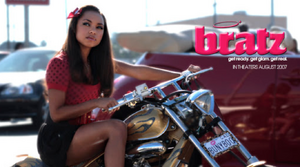 Sasha in the live action film. 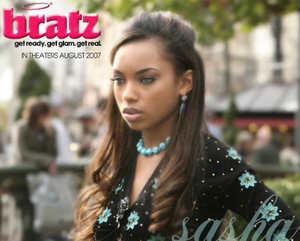 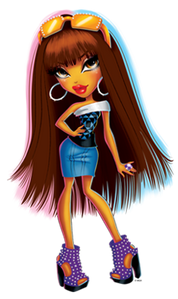 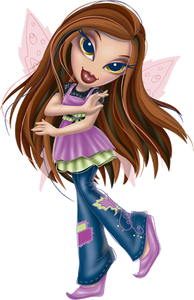 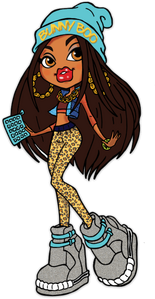 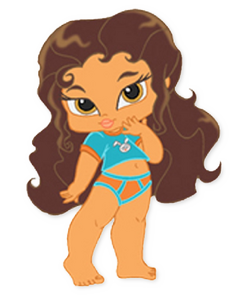 Babyz
Add a photo to this gallery

Retrieved from "https://hero.fandom.com/wiki/Sasha_(Bratz)?oldid=1963821"
Community content is available under CC-BY-SA unless otherwise noted.