All Dogs Go to Heaven 2

To be with Charlie as her husband.

She was voiced by Sheena Easton throughout the entire franchise.

Sasha is kind-hearted, protective, loving, good-natured, independent, and rational with a strong personality. She doesn't often show her soft side to outsiders, but she happens to be friendly to people who are nice to her.

She showed her protective side to David when she looked after him. Similar to Itchy, she’s the voice of reason and is more like a guardian angel to others than Charlie is, and constantly expects them to do the right thing, like how she kept trying to convince David to head back home and the way she tried to make Carface see his errors while disguised as the Ghost of Christmas Present in the third film, and there are times in the series where she teaches Charlie life lessons, and gets him to realize his behavior.

She's also very lion-hearted in risky situations, proven near the end of the second film where she aids everyone in the battle against Red and when she stops a junkyard car crusher from crushing the one Charlie is stuck in in the episode "Miss Guidance." Sasha also has a lovely singing voice, as shown in her first appearance.

All Dogs Go to Heaven 2

Sasha first appears when the announcer calls her up for the next talent revealing her full name "Sasha La Fleur" the crowd claps, howls and whistles as her silhouette is shown through a wall.

She ends up stepping out of the area and is revealed singing a song about how she's not willing to take a man for whatever they have to offer ("Count Me Out").

She appears to Charlie instantly, and he becomes attracted to her basically falling in love and stalks her around the bar while she's singing, but she doesn't notice him because he's a ghost.

She walks around the room, causing some male dogs to collapse by flirting with them or teasing them with her tail.

A few scenes past it's shown back at the bar the announcer tells Sasha that she sings pretty good for a stray to much of Sasha's care. She asks if she can have her prize after winning the talent show.

But he ends up giving her a bone with a first place ribbon which disappoints her which claiming that they had a meal for the winner. The announcer sweet talks Sasha into having dinner with him that night, a disgusted Sasha rejects him and takes the bone anyways, leaving quite upset.

Then, she sees a puppy whimpering for something to eat. Because of Sasha's kindness, she scoots him the bone to let him have and then catches a buffet near her eyes and she turns to make sure nobody was paying attention and she starts picking up different food.

As she is stuffing food on a small napkin, Charlie appears, scaring her, and he compliments her singing voice, Sasha is not interested in what Charlie has to say or in himself in general, so she ignores him, but ends up dropping her food due to Charlie "supposedly" helping her which she didn't want.

As they get caught Charlie tells Sasha he'll handle it and while he talks, she runs off, leaving Charlie and Itchy to go follow her.

When Charlie and Itchy step place in a small ditch. Sasha appears and ends up growling at the two and notices Charlie and gets angry.

Charlie gives her the food she forgot and she thanks him kindly but is insecurely kind of embarrassed. Charlie ask if she'd like some company with that food, she tells him sorry because she has a "kid."

Charlie thinks that she has pups, but really Sasha had a human kid she was caring for who ran away from home named David.

She is disgusted and snaps out and then David overhears it, so she feels embarrassed and left confused. Then, she learns Charlie is an angel by forcing him to tell her the truth on who he is.

With David thinking Charlie is his guardian angel to the dismay of Sasha, she questions why he ran away from home after finding out he wasn't lost.

Charlie is up for the idea of David becoming a street performer, but to Sasha's dismay, she disagrees and thinks he should go home instead. But David refuses to go on her side.

So they end up leaving Sasha outnumbered and Charlie asks if she was coming. Sasha, without saying anything, scowls at him and said she will keep a eye on him.

As they're walking down a block Charlie tries talking to her again asking if she was involved with anyone and she tells him no quickly and that she's not taking any applications.

Charlie still pressures her by asking the qualities she wants in a certain male dog, she gives him a run down of different things.

Later on she questions Itchy why is Charlie taking so long in the police department and what's it all about. Itchy refuses to tell her, but when Charlie reappears and says they have to bust the horn out she questions what he means by "it."

Itchy tells Charlie not to say but he does anyways. She is seen helping the boys escape with the horn and out of the police station.

When David is performing his talent "On Easy Street," Sasha is not that interested considering she thought it was a bad idea in the first place, but she goes along with it.

But soon as his talent act is ruined, they go under a bridge for shelter from the rain, she twirls his hair around, and David reminds her his mom used to do that same thing.

While Itchy and David are chowing on food, Sasha notices that Charlie's upset and walks where he's at to comfort him by saying he's doing a good job taking care of David.

Then, Charlie confesses and tells Sasha that he's not David's guardian angel, but a errand boy sent from Heaven to fetch a horn. Sasha sees how disappointed he is cause he found somebody special.

Then, she feels sorry for him and she instantly develops her feelings for Charlie and sings a love song implying that no matter where he goes, she'll always be with him.

Once the song ends and soon as she and Charlie are about to kiss, he disappears before her leaving her in shock.

Later, David and Sasha are alone at the bus station. Then, Sasha tries to get David to pick a bus route, but David still refuses to go without Charlie by his side.

After David's distracted, she turns around and notices that he's being captured by Carface. She tries to stop him, but she is blocked by a moving train before her.

Then, Charlie rescues David from Red and pushes him on a boat where Itchy and Sasha are telling them to get David home safe. While Charlie is fighting Red, Sasha and the gang help out by trapping Red's tail into a pipe.

Finally, once Red is defeated, Annabelle sends Charlie and Itchy back to the heavens, Charlie insists to David that Sasha is going to take him home instead, an upset Sasha is disappointed he has to go and she tells Charlie she loves him (but not before he tells her the same) and she and David watch as the heavens close.

Near the end, a saddened David and Sasha are walking down his home block almost to his house until Sasha senses something coming their way which worries her.

They find out Charlie returned permanently and Sasha is excited and full of glee. Then she notices David's parents greet his return (David's). After David and his family walk inside together, Sasha asks Charlie besides David what was his real reason for coming back and that he'd better not lie to her, he tells her sincerely that he wanted to be a part of her life which shocks Sasha and makes her flattered by his request.

They almost kiss until David interrupts by saying he worked a bit of magic and reveals their bowls with their name on it. Sasha turns back around to Charlie and they share a nice romantic kiss and walk in together now as a couple.

All Dogs Go to Heaven: The Series

The TV series differentiates from the second film, for example: Sasha has a job as the owner and bartender of the tavern for dogs (which is now a cafe called The Flea Bite), she and Charlie don't live with David and are an on again off again couple (and is revealed to have never had a first date together), but are more like frenemies as Sasha is still turned off by Charlie's obnoxiousness.

And she still knows about Itchy and Charlie's secret as heavenly angels, and even aids them in some missions. Although she doesn't live with David anymore, she can still talk to him.

An All Dogs Christmas Carol

Sasha is first seen at the Flea Bite having a Christmas party with Charlie, Itchy, other dogs, and puppies (including a crippled one named Timmy).

Eventually, Sasha acts as the Ghost of Christmas Present in guiding Carface. 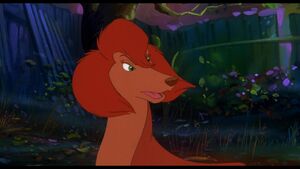 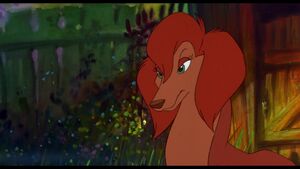 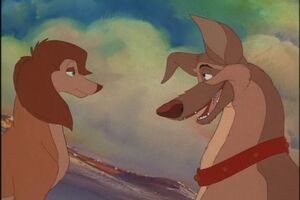 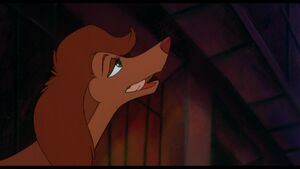 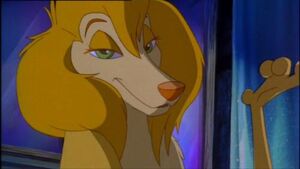 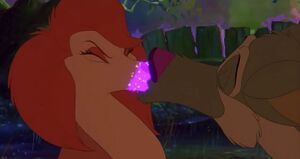 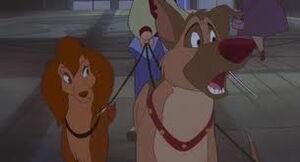 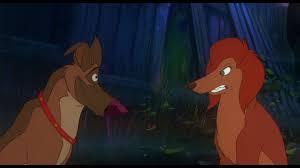 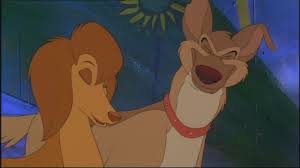