Most if not all the residents of South Park (Former)

Beelzaboot
ManBearPig (Cause of death)

Satan is the central antagonist-turned-major character of the animated adult sitcom South Park. Like nearly all characters on the show he is creators Matt Stone and Trey Parker's exaggerated and creative take on the original idea. Satan was first introduced as the ultimate adversary of Jesus Christ in the final battle between good and evil. In the battle Satan threw the fight having been the sole person to bet on Jesus's victory and thus winning the money of every single person in South Park.

Satan appeared again in the film South Park: Bigger, Longer & Uncut. He functions as the central antagonist, later anti-hero of the movie along with his former lover Saddam Hussein who was egging him on to destroy the world. At the end of the movie, Satan realizes Saddam was just using him and pushing him into destroying the world when all Satan originally wanted was to just leave hell so he could live happily on earth instead. Satan turns against Saddam during the movie's finale and returns to Hell to repay Kenny McCormick for making him realize the truth about himself. Ever since the movie Satan has been portrayed as a comic relief of the show and a normal person who just happens to be the king of hell. Satan has been shown to sometimes be immature but kind and empathetic though he no longer wishes to harm the people of earth he has never given up his long term goals of conquering heaven. Oddly enough Satan is still on friendly terms with God.

In the Season 22 episode "Nobody Got Cereal" Satan gets pissed off with Manbearpig for destroying South Park so he challenges him to a fight but due to Satan being weaker then ManBearPig, the creature ultimatly throws the Dark Lord like a ragdoll and within a minute of the fight between the two starting. Satan is lying on the ground dying and after telling the boys that they can defeat ManBearPig he dies with the boys crying and citizens of South Park gathering round him while his ghost goes up to heaven with Angel wings 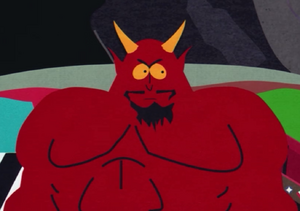 Retrieved from "https://hero.fandom.com/wiki/Satan_(South_Park)?oldid=2115884"
Community content is available under CC-BY-SA unless otherwise noted.