She was the ruler of Mandalore and leader of the pacifistic New Mandalorian people during the final years of the Galactic Republic. Sometime before the Blockade of Naboo, Satine spent several months with Jedi Master Qui-Gon Jinn and his Padawan Obi-Wan Kenobi on the run from assassins. During this period, Satine and Obi-Wan developed romantic feelings for each other, although they never acted on their mutual attraction.

In the final year of the Clone Wars, Satine was usurped by the Mandalorian extremist organisation Death Watch, who sought to resurrect Mandalore's warrior past. The leader of Death Watch, Pre Vizsla, was usurped and executed shortly after his victory by Darth Maul in an ironic twist. After luring Obi-Wan to Mandalore, Maul executed the imprisoned Duchess before Kenobi's eyes to torment the Jedi Master.

She was voiced by Anna Graves, who also played Caroline Becker in Wolfenstein (2009), and Ina Leifsdottir in Voltron: Legendary Defender.

Satine is a devoted pacifist as well as the ruler of Mandalore. In her youth, she was targeted by political adversaries and was put under the protection of Jedi Master Qui-Gon Jinn and his Padawan Obi-Wan Kenobi. During the year they spent on the run, Satine and Obi-Wan had deeply fallen in love with one another, but ultimately Obi-Wan chose the Order. The two were reunited during the Clone Wars when the actions of the Death Watch drew the Senate's attention to Mandalore. 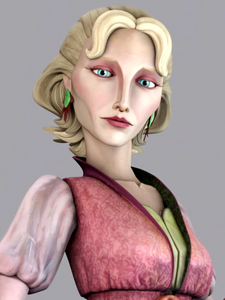 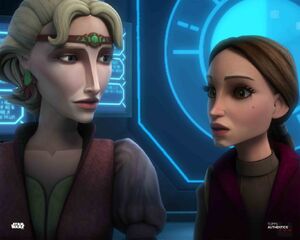