Fighting.
Being with Lighting Lad.

Saturn Girl (real name Imra Ardeen), is a fictional character and superheroine in the DC Universe, and is a founding member of the The Legion of Super-Heroes in the 30th and 31st centuries. As a member of the Legion, she is friends with Cosmic Boy, the love-interest of Lighting Lad, and ally of the Superman Family. Though all of the inhabitants of her homeworld of Titan are telepaths, Imra's telepathy ranks among the strongest of her race.

She was created by the late Al Plastino, and the late Otto Binder, and first appeared in Adventure Comics #247 in April of 1958.

Arriving to Earth, Imra would stop the attempted assassination of R.J. Brande alongside Rokk Krinn and Garth Ranz, and the three would later find the Legion of Superheroes. The group was formed by the trio to honor the legacy of the world's greatest heroes, the Kryptonian's Superman and his cousin, Supergirl. Imra would adopt the name "Saturn Girl" from Brande, who also encouraged her, Rokk and Garth to form the Legion in the first place.

Saturn Girl, Rokk and Garth (who adopted the names "Cosmic Boy" and "Lighting Lad" when forming the Legion) would travel to the twentieth century several times, where they would meet Superman and Supergirl. The group would offer the two membership into the Legion, and have the heroes go through several tests. Around this time, Garth developed romantic feelings for Imra, but she reject his advances on several occasions.

Saturn Girl became known for her compassionate and self-sacrificing nature, such as when she offered to die in Superman's place when he was about to be killed by Legion of Supervillains. In 2975, Imra would learn that one the newly elected leader of the Legion would die, and she decided to take their place by using her telepathy to force the others to vote her leader. However, Lighting Lad would die in her place when he disobeyed her orders, leaving her distraught. She then vowed to find a way to revive Garth, and managed to do so when Chameleon Boy's pet Proty sacrificed itself. Saturn Girl's leadership and loving nature gained her a reputation within the group, and she was kept in position as the leader of the legionnaires.

Seeing Garth sacrifice himself for her caused Ardeen to return her feelings for him, and the two started dating for ten years. When he asked for her hand in marriage, Saturn Girl initially refused since the Legion had a rule that if a member married, they would have to retire. Despite her reluctance, Imra would relent after speaking with her mentor on Titan, and she married Garth and the two retired from the Legion. The two would return to the Legion with the current members were captured, and then they germanely returned the Legion rule was removed. Afterward, Imra and Garth would have a son together named Graym, but unbeknownst to them, Ardeen was pregnant with twins, and the second child was taken by Darkseid and turned into Validus.

During the Zero Hour storyline, Saturn Girl and the Legion of Superheroes were erased from existence when Parallax brought a cosmic crisis by controlling the Green Lantern Hal Jordan. Imra and the group would be restored during the Infinite Crisis storyline after Superboy Prime and Alex Luthor were defeated. Though everyone returned, the Legion's history was slightly altered, such as Ardeen having a childhood crush on Superboy, or Supergirl being in the thirtieth century. The Legion would face another crisis when the Time Trapper appeared, and Saturn Girl called everyone from different universes to help them defeat the villain.

The timeline would be altered when the Flash caused the flashpoint, which resulted in a rebirth within the DC universe and every individual. In DC Rebirth, Saturn Girl appears during the Doomsday Clock storyline, being an inmate at Arkham Asylum that helps Reggie Long escape.

Saturn Girl appeared twice in DC's Animated Universe. She first appeared in the Superman: The Animated Series episode "New Kids in Town." She was voiced by Melissa Joan Hart. She and several of her Legion teammates were hunting the legendary Brainiac through time. With the help of young Clark Kent, they manage to defeat Brainiac. Saturn Girl wiped Clark's memories of the event and the Legion returned home.

In the "Far From Home" episode of Justice League Unlimited, the previous Saturn Girl was among the Legionnaires who had been kidnapped and brainwashed by the Fatal Five and the Emerald Eye. She is freed with her teammates thanks to the efforts of Brainiac 5 and Supergirl. She had no lines in this episode.

Saturn Girl was a main character in the Legion of Super-Heroes animated series, being voiced by Kari Wahlgren. In addition to her telepathy, this Saturn Girl was a formidable hand-to-hand combatant and possessed telekinesis. She was a regular character in the first season, appearing in every episode save for "Champions." She was among the team that recruited Superman and she had a crush on Lightning Lad.

She had a fear of roller coasters. In the second season, Saturn Girl's role was reduced as she was placed in a telepathic coma in the season opener "Man at the Edge of Tomorrow." She would recover in time to recall the Legion's foundation and save R.J. Brande again in "In the Beginning." She was an instrumental communication line in the defeat of Brainiac in the two-part "Dark Victory" which wrapped the show.

Saturn Girl, along with fellow founding Legion members Cosmic Boy and Lightning Lad, appeared in an episode of Smallville entitled "Legion." She was played by actress Alexz Johnson. In this portrayal she wore a red jacket and pants combined with a white top featuring the Saturn logo. She and her teammates saved a young Clark Kent from the Persuader, an old Legion enemy and a member of the Fatal Five, who had traveled back in time in order to kill Clark. This Saturn Girl typically placed two fingers to her forehead whilst utilizing her telepathic abilities. Following their apprehension of Brainiac, she returned with her teammates to the future with the promise that "Brainiac 5" would be better behaved than the original. 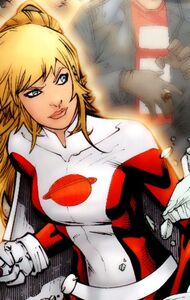 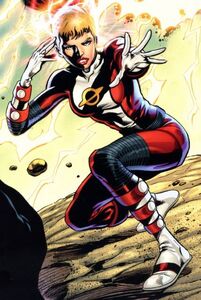 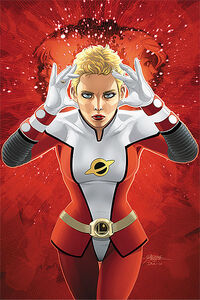 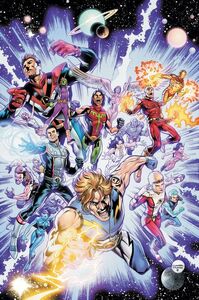 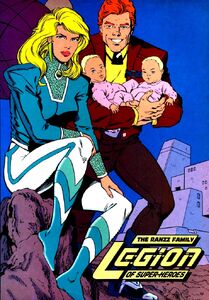 Imra and Garth with their children. 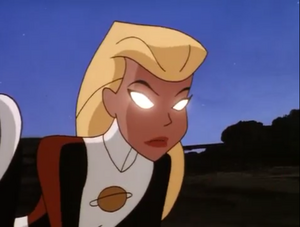 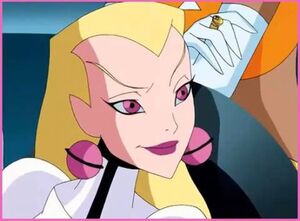 Saturn Girl in Legion of Super-Heroes. 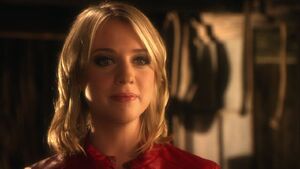 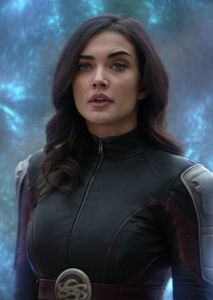