Dragon Alien
The Savage Dragon, also known as Officer Dragon, is the titular comic book hero of the same name.

In the animated series, he is voiced by Jim Cummings.

He is an alien emperor named Krurr and was ruthless until he defeated his evil past self.

Now reborn as the Dragon, he now fights to protect the world from evil supervillains and is even a cop in Chicago.He would later fight the overlord and vicous circle along with the forces of Cyberface,Damien Darklord,his evil twin Dark Dragon,and later on his original self Kurr.Dragon would spend his time as a police officer and then later becoming a free lancing bounty hunter , started having numerous relationships with women notably Jennifer amd Rapture,and having Sereval children along the way Malcolm being the most Prominant and later discovers his past then got put into jail and then reformed meeting his grandchildren then fightning Darklord at the cost of his life.

He now has a son named Malcolm who follows in his father's footsteps as a hero and a step daughter named Liberty.

His archenemy is the Overlord.

He has dated multiple women such as Alex Wilde,Jennifer Murphy aka Smasher,and Rapture.

He has superhuman strength, speed, stamina, durability, and a healing factor. 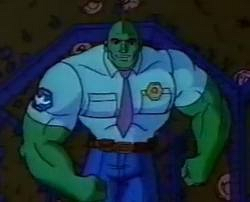 Retrieved from "https://hero.fandom.com/wiki/Savage_Dragon?oldid=2253597"
Community content is available under CC-BY-SA unless otherwise noted.