Leader of the Partisans
Commander of the Rebel Alliance Military (formerly)

Saw Gerrera was the second in command to his sister of the Onderon Rebellion that helped free his planet from the Separatists.

In The Clone Wars and The Bad Batch, he was voiced by Andrew Kishino who also voiced Janja. In Rogue One, Rebels and Jedi: Fallen Order, he was played and voiced by actor and director Forest Whitaker.

Saw Gerrera lead the Onderon Rebels in their formative era. He and Lux Bonteri requested assistance from the Jedi, who agreed to train them. During the rebel victory, Saw shot down a Separatist gunship that crashed near his sister Steela Gerrera, causing her to fall off a cliff to her death.

Saw later became a key figure in the Rebellion against the Empire. Because of his more extreme methods Saw and the Rebel High Command had a falling out, after which Saw went independent on the moon Jedha.

He then raised Jyn Erso as his protege and sort of like his daughter after her father was taken by the Empire and her mother was killed by death troopers. 15 years later after Jyn left his own rebellion, a Imperial defector named Bodhi Rook came to search for him near the Holy City to deliver a message from Galen Erso, Saw at first did not trust him and let the creature Bor Gullet to torture to see if he was telling the truth. After the creature tortures Bodhi and looks at the message sent to him by Galen, he is reunited with Jyn who came to Jedha to find out what the message was. After a brief argument, Saw shows Jyn the message from her father about how to destroy the new weapon by the empire which was called the Death Star as it attacks and destroys the Holy City as the explosion comes near the base of his rebels. Saw then tells Jyn to go with Cassian Andor and their new allies to escape and save the Rebellion.

Saw died when the Holy City was destroyed by a low power blast from the Death Star. 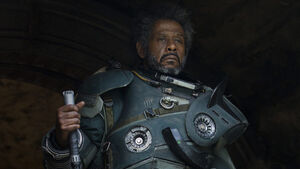 Saw Gerrera during the Empire's reign on Jedha 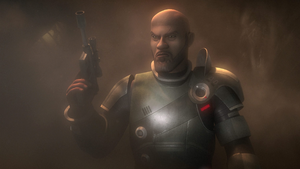 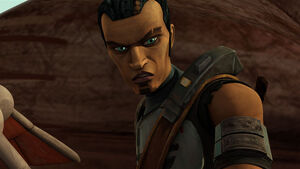 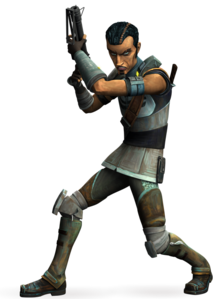 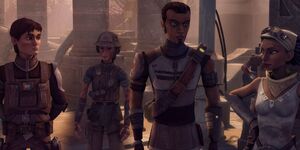 Saw and the Onderon Rebels 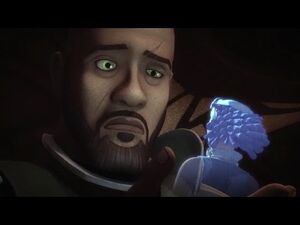 Saw looking at a hologram of his late sister Steela

Saw and his sister Steela

Saw with the Lothal Rebels 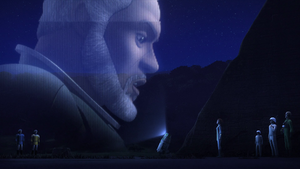