Go back to show business, and be with Danny (succeeded).

Sawyer Cat is the deuteragonist of Cats Don't Dance.

She is voiced by Jasmine Guy with the late Natalie Cole doing her singing. In the Japanese dub from the movie, she is voiced by Urara Takano. In the Latin-American Spanish dub her singing and speaking vocals are made by Claudia Pizá.

By far, she has the most outfits throughout the film. She was originally a dancer with a beautiful singing voice. In fact, She is cynical due to her dreams being broken, and she is hired as a secretary for Farley Wink instead. She is also Danny's love interest, but due to his inadvertent act of knocking her in the fountain, she doesn't seem to like him at first.

She was revealed to be a dancer with a beautiful singing voice, but had her dreams broken and was hired as a secretary for Farley Wink instead.

Because of those events, she became cynical and pessimistic about dancing.

She is first seen as she runs into Danny, but he accidentally causes her problems such as taking her taxi, bumping into the roof's antenna making her spill her coffee on her suit and making the feather on her hat burn, and she splashes into a fountain, eventually ending up soaking wet. When she arrives at the office, she meets Danny and gets forced into playing a role in the ark picture and with Danny as her partner, much to her dismay. She then gets her tail slammed by the door by Danny accidentally.

When they were filming the movie, their role was just to sat "Meow", and Sawyer warns Danny not to take the lead role, but Danny doesn't listen, which leads to trouble when Danny meets Max, Darla Dimple's assistant and gets squashed to the ground.

She is next seen as she was typing and she hears the music and comes out to see Danny and his animal friends dancing to "Animal Jam". She is reluctant to dance with Danny as it's "a waste of time and he will never dance in the movies". Danny had not said anything about movies, nevertheless, Sawyer refuses. However, Tillie bumps her all the way over, and Danny compliments her "dance", but says it's "a little rusty". Sawyer then ends up having fun. Nevertheless, she still says it's a waste of time, even though Danny then asks to get her an audition with the head of Mammoth Studios, L.B. Mammoth.

When Danny asembles the animals on Darla's ark, a flood soon appears, which was caused by Darla and it eventually gets all the animals fired from their jobs and Sawyer leaves in distraught. She was seen leaving the diner where the animals were upset at Danny for getting them fired and sings "Tell Me Lies". Tillie tells her she can still catch him. Sawyer arrives at the bus stop to see Danny, but to no avail as Danny has already got on the bus and finds he left behind his hat and his "to-do" list and she cries, feeling sorry for the way she treated Danny.

Danny and his penguin friend Pudge prepare an all-animal show after the premiere of "Lil' Ark Angel", Sawyer and Tillie grabbed the others and snuck behind the stage and they all perform a musical number "Nothing's Gonna Stop Us Now" and Darla Dimple tries to sabotage them on stage, but fails. She yells angrily at Danny that she flooded the stage, but accidentally reveals her actions to the audience and gets fired. In the end, Danny and Sawyer almost kiss, but they end up kissing Flanigan's cheeks, much to their disgust. 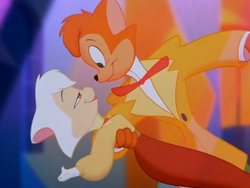