Have Kyosuke as her boyfriend, Become a Magical Girl that uses her powers for others rather than herself, Defeat and kill Homura Akemi and Kyoko Sakura (all failed)

Sayaka Miki is the tritagonist of the anime series Puella Magi Madoka Magica, and one of the main protagonists of the sequel movie Rebellion. She is Madoka's best friend and, like her, a second-year student at Mitakihara Middle School. Tomboyish, confident, and a little brash, she upholds a strong sense of justice and adopts a heroic attitude as a magical girl.

Sayaka is Madoka's classmate and best friend. She is a lively tomboy with strong ideals of love and lawfulness. After helping Madoka rescue Kyubey, she contracts with him to grant her wish to heal the wounded hand of Kyōsuke Kamijo, a young violinist that she is infatuated with and visits daily in the hospital. As a magical girl, Sayaka's weapon of choice is a cutlass, she can produce multiples of them at a time. She also has extraordinary regenerative ability due to the healing nature of her wish. Sayaka insists that her wish is selfless and feels that fighting witches to save people is a bonus, even after witnessing Mami's death. After learning that her soul is no longer attached to her body and that her close friend Hitomi intends to become Kyōsuke's lover, she falls into isolation and refuses all help. When she overhears a conversation between two men that mock and despise their girlfriends, Sayaka reaches her limit. As she reveals her corrupted Soul Gem to Kyoko, she states that she was a fool, at which point the corruption overwhelms her and her Soul Gem transformers into a Grief Seed. Sayaka becomes Oktavia von Seckendorff, an armored mermaid witch with a labyrinth similar to a concert hall. In the final timeline, Madoka in her omniscient state offers Sayaka a second chance at life, but Sayaka turns it down, saying she only wanted to see Kyousuke succeed with his violin before passing on.

Sayaka is a bit tomboyish and acts heroic. She is devoted to her friends, especially when she makes the contract right away and saves Madoka. However, she also has a large girlish side in that she loves classical music, and is very interested in romance.

She loves and cares deeply for Kyosuke and is extremely hurt when he chooses Hitomi. This is why she falls into deep despair, as a result corrupting her soul gem and ultimately making her a witch. When she listens to Kyosuke one last time, (unless in the new universe by some people's theories she can watch over the universe with Madoka then she may listen to Kyosuke play again), she actually feels glad and proud for him that Hitomi will make him happy. By Rebellion, she seems to have moved on from him, going so far as to refer to him as 'Captain Oblivious' for never noticing her feelings.

Sayaka is also a very righteous girl; unlike Madoka who believes conflict between Magical Girls is wrong, Sayaka doesn't care if her opponent is a witch or a Magical Girl, outright saying that she became a Magical Girl not to fight witches, but so she could have the strength to do what's right and protect the people she cares about, even if it means fighting people who aren't witches. She stayed true to this even after learning about Kyoko's past, although she did feel sorry for her.

After learning the truth about magical girls, Sayaka begins regarding herself as a zombie, and grows insecure of everything she believed in up to that point, shown as she is too ashamed of what she became to try and approach Kyousuke. As Sayaka's ideals are put against the reality of her wish's consequences and the stress of fighting, her view of the world is slowly corrupted. She becomes hateful and distrustful towards others, including Madoka, whom she lashes out at and accuses of being selfish. She starts to wonder what she had been fighting for all that time, slowly becoming an empty shell, until succumbing to despair and becoming a witch. 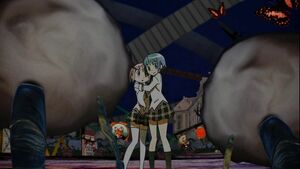 Sayaka protecting Madoka in episode one. 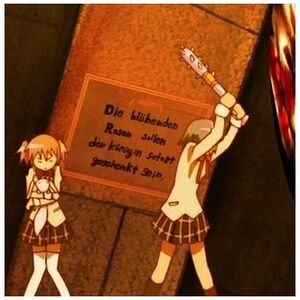 The moment Sayaka swung the bat it turned into a spiked bat. 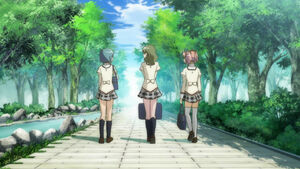 Sayaka is not the tallest of the three. Picture shows that. 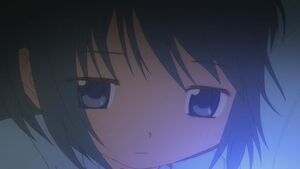 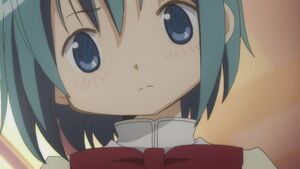 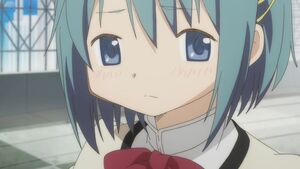 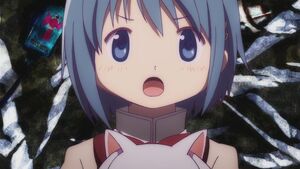 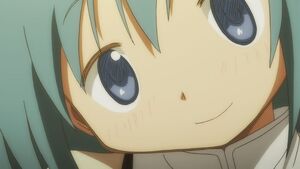 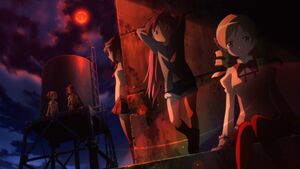 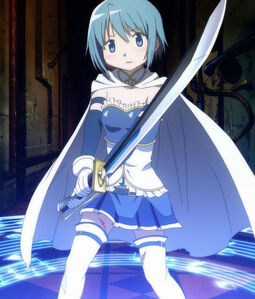 Sayaka as a Magical Girl 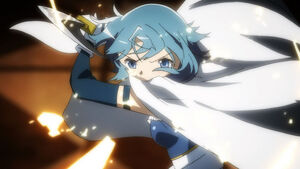 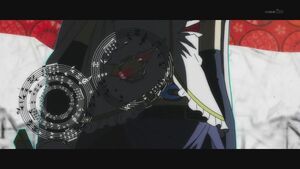 The music circles that appear when Sayaka heals herself. 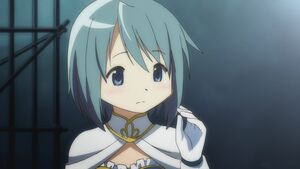 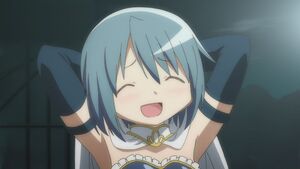 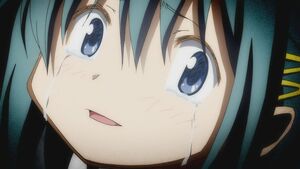 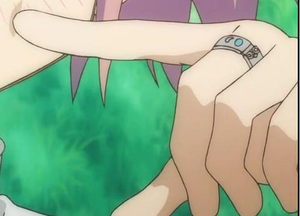 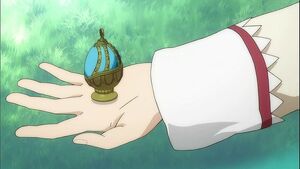 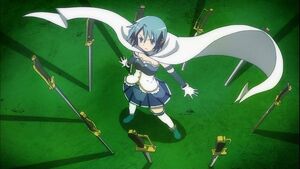 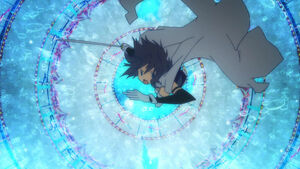 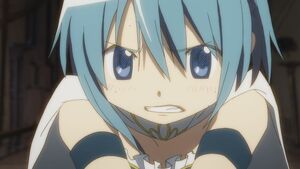 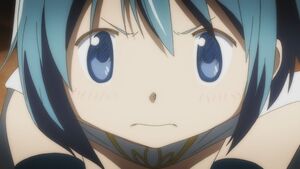 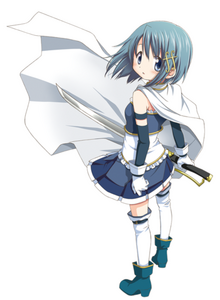 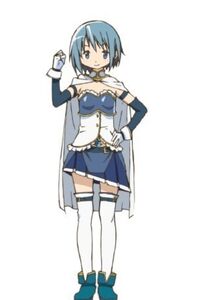 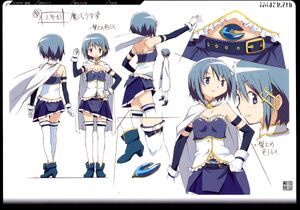 Some close-ups of Sayaka's magical girl clothes!
Add a photo to this gallery 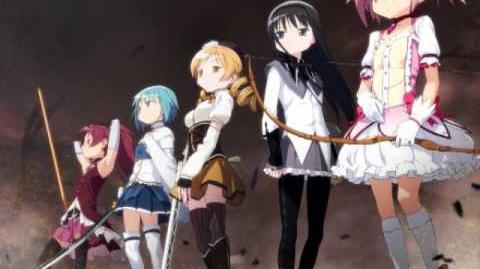 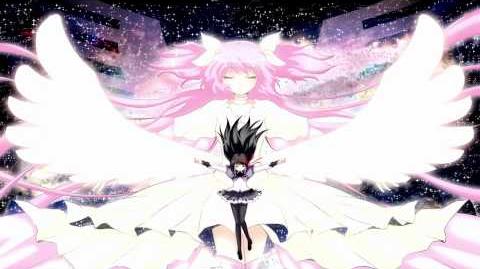 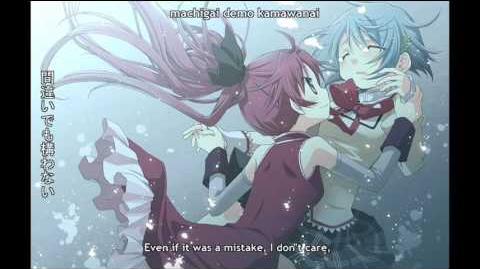 Retrieved from "https://hero.fandom.com/wiki/Sayaka_Miki?oldid=2183951"
Community content is available under CC-BY-SA unless otherwise noted.