Chosen One
Sayo is a member of the Night Claw Organization and major rival of Koh in Digimon Dawn Version. Her design is a female counterpart of male character in Digimon Dusk Version. Her main Digimons are Lunamon, Lilamon and MachGaogamon. Although, she ended being a stand-alone DigiDestined with SkullScorpiomon. ChaosGallantmon, Zanbamon, Samudramon, GranDracmon, and WaruSeedramon.

Sayo is a teenage/adult young woman with white-fair skin, waist length-long purple hair andpurple eyes. She wore a goggles over a purple hat with the double point resembling cat ears coming out of it, a blue turtlenecked shirt, a black jacket with long sleeves, a purple badana on her left arm, a black skirt, blue and black socks with dual stripes, and black-pink sneakers. She wears a digivice on her neck, which can be used as a necklace.

Sayo is an emotionless and serious person, who is sometimes very kind to other people. She is always being loner like Matt and the rest of the loner people, especially Rika. Sayo is determined to protect innocent humans and Digimon from many evil threats, including Grimmmon itself.

Sayo can be selected at the beginning of the gaming depending upon the gender, which can be chosen as male or female.

Sayo appeared as the main rival to the protagonist, Koh, in the Normal Tamer Tournament event. Sayo is the only person not to fall under ChronoCore's control. Sayo was very confused when possessed friends attack Koh during the Attack of the Night Crow event. However, she quickly challenged Koh to a fight for hurting her friends. After being defeated, Sayo was able to escape to the DarkMoon City.. Sayo joins forces with Light Fang to save humanity by battling many foes, including Kowloon Co. They use her Digivice to open the digital gate to DarkMoon City. Sayo lent her Digivice to Koh by helping him to pass. After Grimmon's eventual demise, Sayo attained the Platinum Tamer. Sayo finally challenged Koh to a final match in the tournament. After being defeated, Sayo congratulated Koh for letting him to receive and proclaim the Legendary Tamer Rank.

Sayo appeared once again as the non-playable character. Sayo can be fought against the player in Gold Tamer Match. She leads team Moonlight. 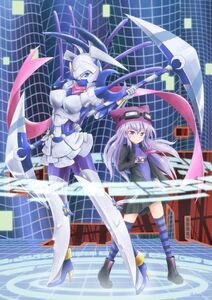 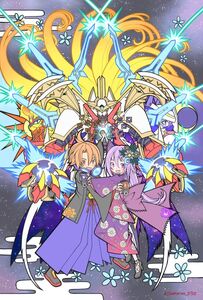