Get the MC/Protag to join the Literature Club (succeeded)

Monika (after she told Sayori to kill herself)

Sayori is the deuteragonist of the 2017 visual novel game, Doki Doki Literature Club!.

When she inherited the position of president, she started displaying self-awareness patterns quite similar to Monika when she was president.

Sayori has pale strawberry blonde hair, cut short in a slightly messy bob, with a red bow on the left side of her head. Her eyes are sky blue, and she is of average height and weight. She wears the normal school uniform like the other members of the Literature Club, but unlike the other members, Sayori keeps her blazer unbuttoned, and her collar is crooked.

Sayori is portrayed as a talkative person, being very bubbly and kind. She is very clumsy and notorious for finding ways to accidentally hurt herself or to drop things. She is usually the only character, other than the protagonist, capable of breaking up arguments, and is described as being paramount to keeping a relaxing atmosphere in the Literature Club. Sayori tries her best to help everyone be happy and dislikes attention directed at her well-being because she feels unworthy of anything that others have to offer her.

Despite her lighthearted facade, Sayori hides some deep depression and lack of self-esteem that causes her to try to make everybody around her happy as an attempt to make herself happy, to no avail. Her relationship with the protagonist and other people's happiness are her main coping mechanisms since she believes that if she makes everyone else happy, she will not have a reason whatsoever to be unhappy.

Sayori was born in 1999. At an early age, she became childhood friends with the Protaganist and they walked to school together until Sayori began oversleeping later on in her life.

In 2017, Sayori joined the Literature Club at her high school, soon becoming the Vice President, and invites her childhood friend to also join the Literature Club. The protagonist then meets the other members of the club: Natsuki, Yuri, and the club president Monika. He starts to participate in the club's activities such as writing and sharing poetry, and grows close to the four girls. After a few days, Sayori started to act not like herself and became more sad. The Protagonist told Monika about this, and Monika went over to talk to her. While it seemed like Monika was helping to cheer her up, it is assumed she actually said horrible things to Sayori to make her feel worse. Eventually Sayori goes home and isn't seen in the club again until Act 4.

Whilst preparing for an upcoming school festival, the Protagonist goes to Sayori's house to see if she's okay. Sayori reveals that she’s had serious depression her whole life, marking the beginning of the downward spiral of the game’s tone. Sayori also confesses her love for the protagonist after he either bakes with Natsuki or helps Yuri with decorations. The next day, the protagonist becomes incredibly worried about Sayori due to her not answering any of his text messages. He then goes to school and discovers one of Sayori's poems, which just has "Get out of my head" written over and over again. He then rushes to Sayori's house, gently opens the door, and finds Sayori's body hanging by a noose. In Act 3, it's revealed that this is a direct result of Monika amplifying her depression in an attempt to keep her from confessing her love to the player. Sayori cares about the player deeply to the point of romantic interest, but she will end her life regardless of the player's decision to reciprocate her confession or not out of ambivalence. If the player accepts her confession, she's driven to suicide out of the player's worry for her, and if he rejects it, she's driven to suicide out of heartbreak.

In Act 2, Sayori is deleted from the game's code and is absent for the entire act. However, a poster of her hanging can sometimes show up in the classroom at random.

In Act 4, Sayori (along with Natsuki and Yuri) is revived by Monika. Due to Monika being deleted, Sayori is now the President of the Literature Club. If you get the normal ending, Sayori will thank the Player for getting rid of Monika and show hatred towards her. She will then gain Monika's obsessive personality and make you stay with her forever (until she and the game are deleted by Monika again). However, if you get the best ending, Sayori will thank the player for spending so much time with them all, and then tells the player that they all love him.

If the player deletes monika.chr prior to creating a new save, instead of delivering her normal dialogue at the beginning of the game, Sayori is overcome with existential dread, causing the game to terminate itself. Upon reopening, a black screen with the word END in white letters will be displayed, followed by, a black and white image of her suicide from Act 1's ending. If the player waits ten minutes on this screen, the phrase "Now everyone can be happy." will fade in beside Sayori, written in her handwriting. This screen and message will also appear if the player deletes sayori.chr at any point before her suicide in Act 1.

After becoming the new president after Monika's deletion, Sayori gains self-awareness and knowledge of the game's code. Her powers include: 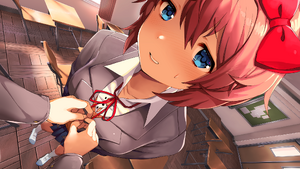 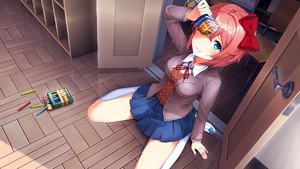 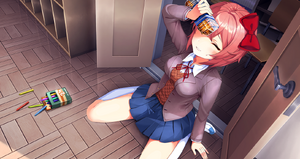 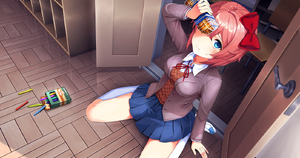 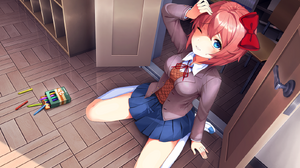 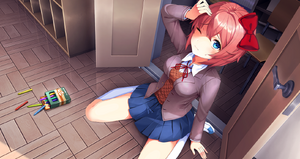 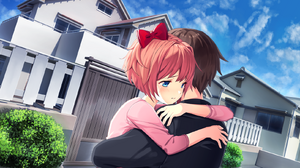 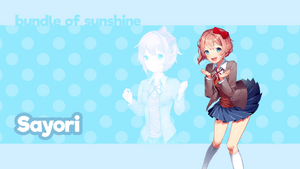 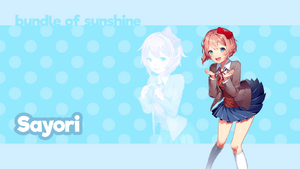 Retrieved from "https://hero.fandom.com/wiki/Sayori?oldid=1733860"
Community content is available under CC-BY-SA unless otherwise noted.