Lady and the Tramp

Spending time with his parents
Being with Angel

Si and Am, Buster, Reggie, The Dogcatcher, Aunt Sarah (sometimes)

Lady and the Tramp

Scamp is seen at the end of the film that he had a mad face, but he never talks. Lady handles him a few times, after tugging on Jock's sweater. Lady is fed up and carries him to an open present box, but he makes the box fall and decides to calm down. He then joins his sisters to hear Trusty (whom they call Uncle Trusty) talk about "Ol' Reliable".

Scamp is very hyperactive and a little immature, and he's also seen to have different appearances, more from Lady than Tramp. He is lighter colored, his ears are a little bit longer, and he has the same eye color like his mother. He is a wild, stubborn, furious, energetic puppy who really hates house dogs and family. He thinks that a family is "nothing but rules, rules, rules" and he goes "wild and free," but he soon realizes that it only leads to trouble and takes to finally discovering that a family is more than rules.

Originally, Scamp is exactly what he is named—a frisky, serious scamp of a pup that gets into trouble from time to time as he holds little respect for rules. Scamp goes to being a wild dog, free to run without worries, unhindered by rules or boundaries in "a world without fences". This puts him in a conflict with his father, Tramp, whose past Scamp is originally unaware of, believing Tramp to always dreams to be a house-pet when he lived the life Scamp, but is unaware of the harsh realities of that life. His respect for his father is less than so, as Tramp has put his past behind him and fully embraced the life of a house-pet, as well as gaining a clear respect of rules, which he tries to impress upon Scamp. When Tramp punished Scamp by making him stay chained to his doghouse, he is able to break the chain after Tramp goes back inside the house and runs away.

Scamp puts some trust into Buster, the leader of the Junkyard Dogs, who has a history with Scamp's father. Scamp desired to prove himself worthy of being a Junkyard Dog in Buster's eyes to the point of stealing from his own family and turning his back on his father. Needless to say, Scamp got angry when Buster, who figured out Tramp was Scamp's father, leaves him to be captured by the dogcatcher as revenge against Tramp, and Scamp finally understands how much he loves and misses his family. When Tramp saves him, Scamp finally gets a healthy respect of rules and appreciation of the family that loves him and begrudgingly accepts baths.

Throughout his adventure, Scamp had a crush on a young Junkyard Dog named Angel, and she returned his affections in a smug, playful kind of way. History repeated itself when Scamp took Angel to the very same restaurant his father took Lady and they share a spaghetti meal from Tony (albeit in a more messy manner). Scamp was surprised to learn that Angel desired a family like the one he left behind and was astonished to find out he ran away from them, and that she had been in five families but they never worked out. Scamp accidentally betrays Angel by blurting out "she's the one who wants to be a house-dog" in front of all the Junkyard Dogs and she runs off, hurt and upset. But when she sees Scamp with the dogcatcher, she comes to his rescue by leading Tramp to the pound and aids in saving Scamp. To both their joy, Angel is accepted and taken in by Scamp's family so they can always be together.

Scamp as a puppy, with Jim Jr. 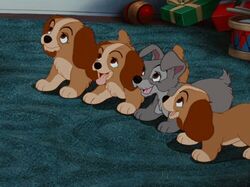 As a puppy, with Annette, Collette and Danielle 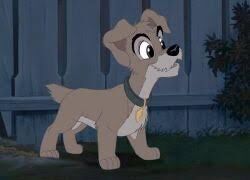 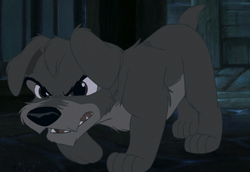 An angry Scamp, without his collar 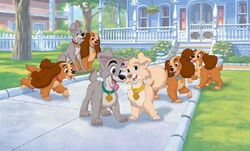 Scamp with his parents, his sisters and Angel

Scamp with his parents, his sisters, Angel, Jock and Trusty 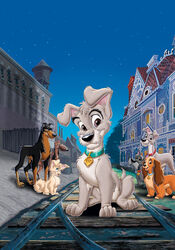 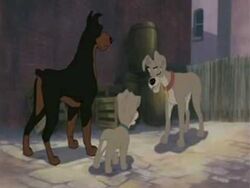 Scamp and his father Tramp are like a true team, reiconciling each other.

Scamp reunites with his mother Lady and sisters Annette, Collette and Danielle.

Scamp with his parents