The Scarred Man
Sir (by Yoki)
Mr. Scar (by May Chang)
Ishvalan (by Olivier Mira Armstrong)

Scar is an antagonist-turned-anti-hero in the anime/manga series Fullmetal Alchemist. He is a disturbed loner. His right arm does not belong to him, but his older brother. His older brother was obsessed with finding the Philosopher's Stone and tattooed his whole body.

During the Ishbal civil war an alchemist, Solf J. Kimblee, killed his brother, blew off Scar's arm, and gave him the "X" scar on his forehead. Scar's brother then transmuted his own arm onto Scar's shoulder, giving the maimed warrior priest the powers of alchemic deconstruction that he then uses in his quest for vengeance.

Scar seeks his revenge against the state alchemists, all of whom he blames for the destruction of Ishbal. His wrath does not extend, however, to non-state alchemists, which is why he does not seek to kill Alphonse Elric during their frequent confrontations.

Being a native Ishvalan, the man known as Scar carries the dark complexion and distinctive red irises of his people. He is fairly tall with a muscular build and his hair is shaved close on the back and sides, leaving a silver-colored crown on top. In the manga and 2009 anime storyline, this crown sticks up a bit, while the 2003 anime series depicts it as relatively flat and spread out. Scar's right arm is adorned with a thin scar stretching entirely around the limb where the bicep meets the shoulder and, from that mark all the way down to the wrist, is nearly covered with a complex tattoo. The upper portion of his face is disfigured with a large X-shaped scar which stretches across his forehead and down over his eyes into his upper cheekbones. The manga storyline portrays Scar as being in his early- to mid-thirties while the 2003 anime depicts him as being roughly ten years younger. In the early part of either series, Scar wears sunglasses to hide his red eyes from view and bears a distinctive gold-colored jacket emblazoned with a cross on the back and sleeves. Additionally, he sports a pair of black slacks with a white cross on the left leg and a white stripe running down the right.

Scar is a decidedly brooding and angry man, almost totally consumed by hatred toward the people who destroyed his homeland. Knowing full well that his actions go against many of the teachings of his religion, he still fashions himself an agent of God's divine punishment and takes out his fury on State Alchemists. However, vestiges of his former life's kinder nature are prone to seep through. Even in the middle of his bloody vengeance, Scar is willing to show compassion toward others, honoring last requests and offering a chance to pray before dying. He is reasonably wise and a skilled rhetorician, though his misguided thirst for vengeance clouds his greater judgment and leads his arguments in circles. Having had his people and his family stolen from him, Scar sympathizes with those who care for their loved ones and looks after those who have lost their place in the world. Additionally, he is very protective of his surviving kinsmen and takes all their words of encouragement or chastisement to heart.

As a former warrior of Ishval, Scar is quite adept at hand-to-hand combat, boasting significant strength and stamina, remarkable agility and reflexes and deceptive speed. Though the 2003 anime shows him as a young armed combatant during the war, in the manga he displays his abilities on the field by subduing a number of armed Amestrian soldiers using only melee tactics. Scar's killing spree throughout Amestris itself is proof of his skills, as he manages to murder ten State Alchemists (including Basque Grand, who had been hailed as a combat specialist) and is able to hold his own against combat-based alchemists like the Elric brothers and Alex Armstrong. In addition, Scar proves himself capable of taking down inhuman beasts such as chimeras and Homunculi. Most impressively, through a combination of luck and skill, he managed to gain a pyrrhic victory over a severely wounded Wrath.

Scar is also reasonably intelligent, able to comprehend some more complex alchemical texts and concepts despite having never studied the craft and an adequate tactician capable of immediately identifying and assessing his opponents' weaknesses in combat. 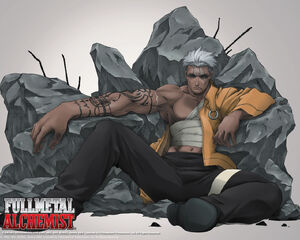 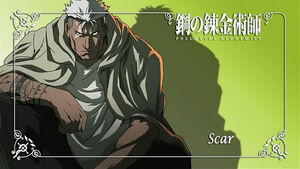 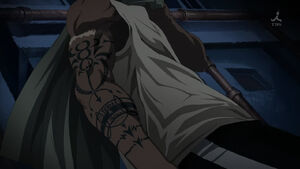 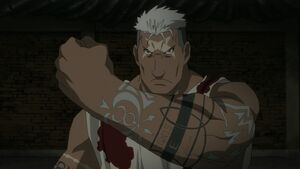 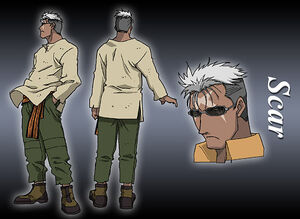 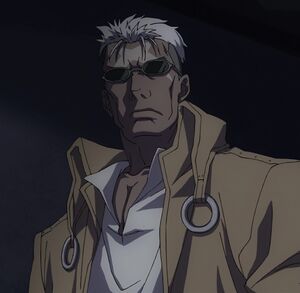