No information
Scattershot is a major protagonist in Transformers Cybertron.

A former computer-game programmer, Scattorshot quickly became Optimus Prime's go-to bot for computer work. But the nervy robot not only doesn't think he's cut out for battle, but believes the mere fact that he's done as well as he has in battle is just a big setup. He's convinced his good luck will run out on him, and run out at the worst possible moment.

As such, Scattorshot has developed a thing about guns. He likes altmodes with a lot of them. Maybe with enough firepower, he can prolong that whole karma thing. His companions find him to be a bit pessimistic, but far from hopeless... he may make a great soldier someday if he can just get over that nervousness.

Since gaining a new body and joining the Cybertron Defense Team, Scattorshot has gained more confidence and lost some of his pessimism, now that he has two brothers in arms watching his back. That, and the fact his new body has enough weaponry for him to make his own 'luck'.

The Quest for the Cyber Planet Keys 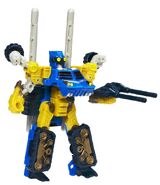 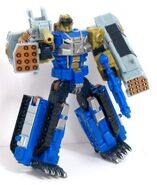