Lounging on a tree by itself and relaxing

Serve Ash to the best of his abilities

Sceptile is a Grass Type Pokémon from the third generation of Pokémon. It Evolves from Grovyle at Level 36, after it evolves from Treecko at level 16. When Sceptile is mega evolved, it becomes a Grass/Dragon-type Pokémon.

Treecko first met Ash when he and his friends came across the dying tree it lived in. It fought and beat Pikachu, before being approached by an elder Treecko who tried to talk it into leaving the tree, but it refused. Ash helped Treecko take care of its tree and after stopping Team Rocket from capturing the other Treecko living in the forest, the Wood Gecko Pokémon had a rematch with Ash, which ended with him capturing it. Soon after this, Ash introduced Treecko to the group’s other Pokémon, but it was unsettled by the attention and stayed in a tree until it rescued May’s Torchic from a wild Seviper. However Treecko was badly hurt by the Fang Snake Pokémon’s Poison Tail and was brought to a Pokémon center for treatment. The Wood Gecko Pokémon then ran off to train, successfully perfecting a stronger variation of Pound. Ash and the others found Trecko, just as Team Rocket showed up to steal Pikachu and faced off against the Seviper from before, now owned by Jessie. However this time, Treecko’s new move allowed it to emerge victorious. The Wood Gecko Pokémon later took part in Ash’s battle at the Rustboro Gym, taking on Roxanne’s Geodude. However Treecko was defeated, even with type advantage, because it didn’t know any Grass-Type moves at the time. After this, Ash used it in his first Gym Battle with Brawly and the Wood Gecko Pokémon managed to beat Brawly’s Machop, but failed to defeat his Hariyama. Ash began a period of special training with Treecko and his other Pokémon, but during this time, it and the group’s other Pokémon were separated from the trainers. Treecko started getting into fights with Corphish and they eventually angered a Nuzleaf, who began capturing them along with its cohorts. But when Team Rocket tried to capture them and the Nuzleaf, Ash and the others came to their rescue and

Treecko and Corphish worked together, making a truce. In Ash’s second battle with Brawly, he used the Wood Gecko Pokémon to fight Hariyama again and this time, Treecko emerged victorious. After Ash had Treecko fight a Shifty to save Nurse Joy, he was inspired by Shfitry’s Bullet Seed to teach it that move. They met a trainer named Natasha and they had a Double Battle with Treecko and Corphish fighting Natasha’s Grovyle and Slugma. Eventually it came down to Treecko and Grovyle, but the fight was interrupted when

Team Rocket tried to make off with Natasha’s Watermeleon. By watching Grovyle use Bullet Seed, Treecko was able to finally learn the move and after Team Rocket was defeated, it resumed its battle with Grovyle. Despite putting up a good fight, the Wood Gecko Pokémon finally lost after its Bullet Seed wasn’t able to match Grovyle’s. Treecko later took part in Ash’s Gym Battle against Flannery at the Lavaridge Gym, where it took on Flannery’s Slugma. But it was eventually burned and recalled by Ash, later being sent out to take on Torkoal, finally being defeated. After this, Treecko was used by Ash to fight a swarm of Gulpin that were running lose in a city. However it, along with the last

Gulpin, were accidentally absorbed by Professor Jacuzzi’s particle beam. After the system overloaded, Treecko and Gulpin were released, but were grown to giant size. It fought the Stomach Pokémon, but eventually shrank back down to normal size, though Jacuzzi managed to capture the giant Gulpin.

Treecko later started getting slightly stir-crazy so Ash decided to have it get some exercise by fighting a Loudred belonging to a trainer named Guy. During the battle, Treecko and Loudred evolved into Grovyle and Exploud. Soon afterwards, Grovyle took part in Ash’s gym battle against Norman at the Petalburg Gym, taking on his

Slaking. The Wood Gecko Pokémon had a hard fight as Slaking countered many of its attacks and weakened it severely. However Grovyle’s Overgrow ability activated, boosting the power of its Grass-Type moves, and it finally defeated Slaking. Grovyle was later used in Ash’s Fortree Gym battle, taking on Winona’s Altaria. Despite type disadvantage, the Wood Gecko Pokémon put up a good fight against Altaria and managed to defeat it. Grovyle was later used against Winona’s Swellow, but was defeated. Some time later, the Wood Gecko Pokémon was used to battle an Altaria belonging to Drake and was able to deal with its flying thanks to its jumping skills, but was eventually defeated. Grovyle later took on Juan’s Luvdisc in Ash’s Gym Battle at the Sootopolis Gym, but the Rendezvous Pokémon used Sweet Kiss to confuse it. Grovyle trashed about, smashing its head in a pillar, and was finally knocked out by Luvdisc’s Water Gun. At the Ever Grande Conference, Grovyle was used alongside Ash’s Glalie in the second rounds, taking on a Charizard and Quilava.

Grovyle was able to defeat Quilava, before being taken out by Charizard, though Glalie managed to win the match. In Ash’s next match against Katie, Grovyle went up against Walrein and at first, the Wood Gecko Pokémon was at a disadvantage due to Walrein hiding underwater then attacking. However Ash had Grovyle use the Ice Break Pokémon’s Ice Beam to freeze over the pool they were fighting on, removing that advantage, and finally managed to win. Ash then used

Grovyle against Morrison’s Steelix in their match after it defeated Pikachu and Torkoal. The Wood Gecko Pokémon emerged victorious by cutting through its Dragon Breath with Leaf Blade and then took on Morrison’s Gligar, but was beaten. Soon after this, Grovyle was sent out to fight Tyson’s Metagross and at first used its Bullet Seed against the Iron Leg Pokémon. But when the Wood Gecko Pokémon tried to use Leaf Blade, Metagross knocked it out with Meteor Mash. After Ash went to the Battle Frontier, he used Grovyle in his match with Greta, sending it out to fight her Hariyama, but lost.

Later, when Ash and his friends were at Camomille Island, Grovyle took on a Tropius defending its tree. However it was overwhelmed by the Fruit Pokémon until Nurse Joy used her Meganium to make it leave Grovyle alone. Ash and the others brought it to the Pokémon Center and Meganium healed it, causing it to develop a crush on the Herb Pokémon. Grovyle went back to fight the Tropius again and this time managed to win. But Meganium arrived with Team Rocket and was clearly attracted to the Tropius, severely depressing Grovyle. However when Team Rocket tried to capture Meganium and Tropius, Grovyle evolved into Sceptile to save it. But it was unable to use any of its attacks, though Pikachu was able to free the Grass Pokémon who then drove off Team Rocket. Sceptile was unable to use any of its attacks for some time, growing angry and depressed. Ash tried to help it, but they got attacked by a bunch of Beedrill, causing Ash and Sceptile to be separated from Pikachu. Despite being injured, the Forest Pokémon went with Ash to look for Pikachu. However they were attacked by another group of Beedrill and Sceptile tried to protect Ash, but couldn’t use its attacks again. Luckily, Pikachu arrived with the others to save them and Palace Maven Spenser had his Venusaur use Sweet Scent to calm down the Beedrill. Suddenly Team Rocket tried to capture Sceptile and Pikachu and Ash jumped onto the arm holding the Forest Pokémon to try and save them. Determined to save its trainer, Sceptile managed to regain its ability to use its attacks and saved

Ash and Pikachu, before sending Team Rocket blasting off. The Forest Pokémon later took part in Ash’s battle against Spenser, fighting his Shiftry and winning. After Swellow was beaten by Spenser’s Claydol, Sceptile took over and defeated Claydol by using a new move, Solar Beam. Some time later, Sceptile helped Ash and the others fight a wild Deoxys to weaken it and help a ranger named Solana use her Capture Styler on it and succeeded. Some time later, when Ash was possessed by the King of the Pokélantis, he sent Sceptile out to fight Brandon’s Regirock.

He forced it to perform dirty tactics, much to its reluctance, before it was defeated by Regirock. Later Sceptile was used in Ash’s match against May in the Terracotta Contest, facing her Blaziken. They put up a titanic fight, which finally ended in a tie. After Ash set out for the Sinnoh region, he left Sceptile at Professor Oak's lab. Some time later, when Ash took part in the Lily of the Valley Conference in Sinnoh, he used

Sceptile for his battle against Tobias in the semi-finals. The Forest Pokémon took on Tobias’ Darkrai who dealt quite a bit of damage to it, but Sceptile finally managed to take it down. However the fight with Darkrai left it ill-prepared to take on Tobias’ Latios, who used its Giga Impact to overpower Sceptile’s Leaf Blade and defeat it. After the Lily of the Valley Conference, Ash sent Sceptile back to Professor Oak’s lab. Sceptile made its silent cameo appearance only in the original Japanese version of The Dream Continues!, but as seen on Delia's home photo, along with Ash and all his Pokémon in his Unova party and at Professor Oak's Laboratory, besides Squirtle and Primeape as his only last two long-absent Pokémon in training by others.

Sceptile is constantly cool and collected, notable for always having a twig in the side of its mouth. It has a strong sense of pride and if it is beaten by an opponent, it’ll become focused on defeating them. While Sceptile isn’t extremely sociable with the other Pokémon, even teasing them before it evolved, it will still fight hard to protect them.

Sceptile is a very strong Pokémon, possessing high speed and agility, and because it is a Grass Pokémon, it can overcome electrical attacks by channeling them into the ground. Sceptile’s moves include Leaf Blade, where the leaves on its arms form into large blades that it uses to slash opponents, Solar Beam, where Sceptile absorbs energy from the sun, then forms a beam of energy that it fires from its mouth, Leaf Storm, where it releases a barrage of leaves at its target, Pound, where Sceptile strikes the opponent hard with its tail, Quick Attack, where it tackles the opponent at high speed,

Bullet Seed, where Sceptile fires a barrage of seeds from its mouth, and Agility, where it quickly dodges attacks. Sceptile also possesses the ability, Overgrow, which makes the power of its Grass-type moves increase when it's weakened or tired. 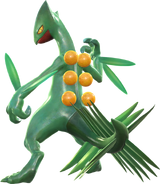