Weapon of mass destruction (by Isidro)

Assist Guts and his party on his expedition of vengeance.

Schierke (シールケ in Japanese) is a young "witch-in-training", a disciple of the witch Flora and a member of Guts' New Party.

Shierke has dark green hair and is slim and small in stature, standing at roughly the same height as Isidro. Her regular attire consists of a robe and a typical witches hat- both purple in coloration. Although these items of clothing cause her to stand out in a crowd, she prefers them over anything else due to the fact that they were hand-made and given to her by her mistress, Flora, and serve as a memento of her. Shierke has also stated that she peforms her magic best when wearing her witch garbs. She is accompanied by an elf- Evarella- who usually sits atop her hat.

Schierke is mature for her age, quiet and withdrawn. She gets along well with most of Guts' party as well as total strangers such a Sonia and Isma. As a result of being rather sheltered throughout her childhood, she is disdainful of the Human world and the Holy See's religion, but finds life outside of the forest bearable due to her companions. Although kind and usually friendly, she sees Isidro as an incompetent monkey and regularly mocks his intelligence, causing some friction between the two- which frequently lends itself to comical situations. Initially, Schierke held a disliking for Guts but this was largely due to her not understanding what kind of man he was. She has since developed an infatuation with him akin to a schoolgirl crush, although their relationship more closely resembles that of a father and daugher. When Sonia extended an offer to join the Band of the Hawk, Schierke thought of Guts before declining. Their journey together constantly brings them into ever deeper understanding. Schierke is the only person to have consistently succeeded in bringing Guts out of the berserker trance induced by the Berserker armor, but she herself notes that the danger and difficulty of achieving this will undoubtedly increase should Guts continue to rely on it.

Although it is unconfirmed exactly where Schierke was born or who her parents were, it can be assumed that she has lived most if not all of her life in the forest under the tutelage of Flora.

She aids Guts' group against a number of trolls when Casca wanders off alone, and then again with a troll infestation in the nearby Enoch village, where she shows just how powerful magic can be. Schierke is then forced to leave her home- and Flora- behind forever when they face an attack by Griffith's demonic followers. Her magical ability and knowledge of the world are impressive for a child her age. One of her most used and useful spells is the ability to hypnotize or temporarily desensitize others, allowing her to slip past unnoticed. However, due to her youth she tends to exhibit dangerous overzealousness at times. Her ability to sense 'Od'- (life force or spirit energy) means she can sense the power, intent, and alignment of other nearby creatures and artefacts.

As of the most recent manga chapters, she remains travelling alongside Guts and company aboard Roderick's ship bound for Elfheim. 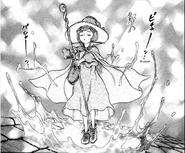 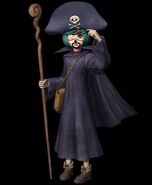 Retrieved from "https://hero.fandom.com/wiki/Schierke?oldid=1172566"
Community content is available under CC-BY-SA unless otherwise noted.