Schwer-Muta Casasola Merkle (RKS009 Neun), or Schwer for short, is a heroine from Rosenkreuzstilette who was forced to subside in a barren, bestial environment before being placed in RKS's care. She is voiced by Alice Ichitsuki.

Schwer is a young girl with black hair and dark yellow eyes. She dresses in a white costume that resembles a cross between a cat, a fox, and a wolf, with pink insides of its ears, a large bushy tail, and a front pocket with a black cross sewn on it. A small white squid named Zeppy is always seen on top of her head.

Schwer is a shy, reclusive girl who dislikes interacting with others. The fact that she had to survive a dangerous environment before joining RKS is a trauma of her upbringing that burdens her to today, making her suspicious of everyone she meets. She is, however, not without goodness, seeing how she opens up to those who show her kindness, even though she still doesn't trust anyone. She lacks malice anyway despite her wierdness, from what Pamela Arwig can tell when she meets her.

While Schwer has many friends in those who look after her at RKS, she actually feels that her only friend is Zeppy. Although Zeppy can't speak and can only say "Kwui-kwui," he is very emotional and will express his emotions when Schwer herself doesn't.

Schwer possesses the ability of Geisterwand, which lets her summon a circular shield of maces that resemble stones with white crosses. While it mainly serves as a defensive ability, it can also be used for offensive purposes. She can also throw a single mace that splits into more maces, and she is capable of creating dummies of herself to confuse her opponent. She is also known to be a trap master, as she loves setting traps and designing mazes to confuse opponents.

Spiritia Rosenberg came to pick up Schwer, feeling that she shouldn't just be staying where she's hiding. Schwer refused to leave of course, feeling that the bonds tying people together were nothing but an illusion. She attacked Tia only to be defeated by her, after which she asked why she attacked. Schwer said that it was her birthday and that no one came to her party. This reminded Tia to voice that everybody's been busy and that everything's been hectic lately. Feeling sorry for being late, she wished her a happy birthday, and she shyly accepted and thanked her. She later supported Tia during her battle with Iris, and Tia came back home and happily reunited with everyone at RKS.

When Grolla Seyfarth found Schwer, they both shared a moment of silence before Zeppy broke the silence, causing her to call her scary. Grolla noted that, as usual, Schwer made no sense. Feeling that everyone should just all apart, she attacked her only to be defeated. After another short moment of silence between the two, Zeppy broke the silence and Schwer said Grolla was strong, leaving as she decided she'd had enough.

Freudia Neuwahl and Strudel found Schwer after evading all of her traps. A conversation between Freu and Schwer didn't proceed at all before Ruu asked if she could rub Zeppy's round mouth. Refusing to let go of Zeppy, Schwer attacked the two and was defeated. Afterwards, she revealed that she had been planning a birthday party for Tia in response to her having wished her her own happy birthday a few months ago. However, when she had gone to town to negotiate with everyone, she had sadly discovered that the town was empty and thus thought everyone was excluding her to host the party without her. Freu explained about a witch hunt from the church and promised her that the party would be held once she brought Tia back, leaving her to leave in contentment. Schwer and the rest of RKS later happily reunited with Tia, Freu, Ruu, and Lilli. 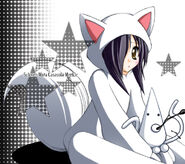 Schwer's Twitter icon
Add a photo to this gallery

Retrieved from "https://hero.fandom.com/wiki/Schwer-Muta_Casasola_Merkle?oldid=1147176"
Community content is available under CC-BY-SA unless otherwise noted.