Scoobert "Scooby" "Dooby" Doo is the titular main protagonist of the popular Hanna-Barbera franchise of the same name. Scooby-Doo is the pet and life long companion of Shaggy Rogers and his three school friends Fred Jones Jr, Daphne Blake and Velma Dinkley in many iterations, including the original series, is regarded as a unique Great Dane dog who is able to speak in broken English, unlike most other dogs in his reality, and usually puts the letter R in front of words spoken. Other incarnations, such as A Pup Named Scooby-Doo, present talking dogs like Scooby as quite common.

The head of children's programming at CBS, Fred Silverman came up with the character's name from the syllables "doo-be-doo-be-doo" in Frank Sinatra's hit song, Strangers in the Night.

Different iterations of the character have been developed and expanded in the various series featuring the characters, many of them contradicting, such as the original series and recent live-action movies where Shaggy and Scooby-Doo first meet as older teenagers for the first time, contradicting the "A Pup Named Scooby-Doo" animated series where they know each other from almost infancy.

In all versions of the character, ‎Scooby-Doo and Shaggy share several personality traits, mostly being cowardly and perpetually hungry. But their friends (Velma, Daphne, Shaggy and Fred) encourage them to go after the costumed villains, usually with "Scooby Snacks", a biscuit-like dog treat or cookie snack (usually shaped like a bone or, in later versions of the cartoons, Scooby's dog tag), though Scooby's inherent loyalty and courage does often force him to take a more heroic stands.

Scooby has a speech impediment and tends to pronounce most words as if they begin with an "R", though most characters are able to understand him perfectly. In most iterations, he keeps his sentences relatively short, usually using charades for anything longer than three or four words. His catch phrase, usually howled at the end of every episode, is "Scooby-Dooby-Doo!" or "Rooby-Rooby-Roo". He also usually says, at least once per episode, "Ruh-roh, Raggy" ("Uh-oh, Shaggy"). His quirky chuckle is often also in an episode, but it changed slightly when Frank Welker took over the voice of Scooby. Scooby's voice is similar to that of the earlier character Astro The Dog from The Jetsons.

Scooby is brown from head to toe with several distinctive black spots on his upper body and doesn't seem to have a melanistic mask. He is generally a quadruped, but displays bipedal 'human' characteristics occasionally. Scooby also has thumbs and can use his front paws like hands. He has a black nose and wears an off-yellow, diamond shaped-tagged blue collar with an "SD" (his initials) and has four toes on each foot and unlike other dogs, Scooby only has one pad on the sole of each of his feet (so that it was easier to draw in the Scooby-Doo Annuals).

Scooby has a fully prehensile tail he can use to swing from or press buttons. Both his head and tail are malleable and useful as a communication aid or creating a distraction

Creator Iwao Takamoto later explained that before he designed the character, he first spoke to a Great Dane breeder, who described to him the desirable characteristics of a pedigree dog. Takamoto then drew Scooby as the opposite of this. He said "I decided to go the opposite [way] and gave him a hump back, bowed legs, small chin and such. Even his colour is wrong."

According to the official magazine that accompanied the 2002 movie, Scooby is seven years old (forty-nine in stereotypical dog years)

Shaggy and Scooby as heroes of the gang

In the following films listed below, it showed that Shaggy and Scooby both had the ability to come to the rescue and act as "superheroes" when the rest of the gang are in trouble (Such as being captured) or needed some help: 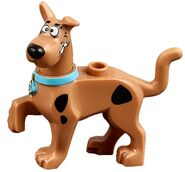 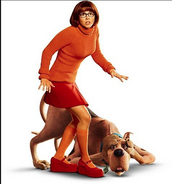 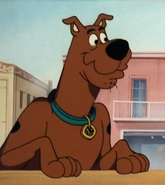 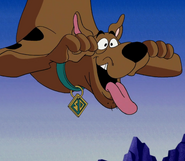 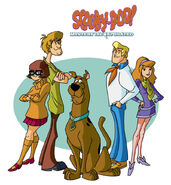 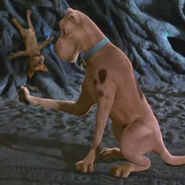 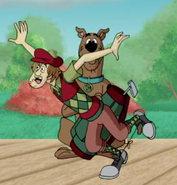 Retrieved from "https://hero.fandom.com/wiki/Scooby-Doo?oldid=784692"
Community content is available under CC-BY-SA unless otherwise noted.