Solving mysteries
Hanging out with his cousin Scooby-Doo

To become a detective and a police dog.

Scooby-Dum is a recurring character in The Scooby Doo Show, voiced by the late Daws Butler.

Scooby-Dum, a white Merle Great Dane with a red hat, red collar and buck teeth is Scooby-Doo's slow-witted cousin. Dum lives with Ma and Pa Skillet, in the Okefenokee swamp of southern Georgia. Whenever Doo and Dum greet each other, Scooby-Doo yells, "Scooby-Dum!" and Scooby-Dum says, "Scooby, Doobie, Doo!" They then do a special handshake involving two high fives. Whenever he heard the word "clue", he would invariably pull out a magnifying glass and, intoning the opening four notes of "Beethoven's Fifth Symphony", chant, "Dum, dum, dum, DUM!" even after a mystery is solved.

Scooby-Dum made his first appearance during the Scooby-Doo half of The Scooby-Doo/Dynomutt Hour on September 25, 1976, in an episode entitled "The Gruesome Game Of The Gator Ghoul". Scooby-Dum appeared in one more 1976 episode of Scooby-Doo, "The Headless Horseman of Halloween", in which he was referred to as Scooby-Doo's brother.

He made two appearances in 1977, when The Scooby-Doo/Dynomutt Hour was expanded into Scooby's All-Star Laff-A-Lympics: "Vampire Bats and Scaredy Cats" on September 17, 1977, and "The Chiller Diller Movie Thriller" on October 1, 1977 in which he was referred to as Scooby-Doo's cousin again there after. Scooby-Dum also appears in all of the Laff-A-Lympics segments of Scooby's All-Star Laff-A-Lympics as a member of the "Scooby Doobies" team, marking his final appearances in any medium.

In his appearances, Scooby-Dum filled the role Velma once had in the original series in splitting up with Shaggy and Scooby Doo, and searching for clues as to the whereabouts of the monster. He differed from Scooby in different aspects: he was consistently more dim-witted, as he would often have trouble identifying the monster until after the others had already run away. He was more ambitious than Scooby in looking for clues and was also braver. His role would later be filled by the steady presence of Scrappy-Doo. 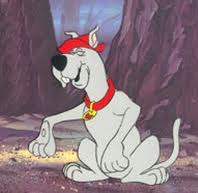 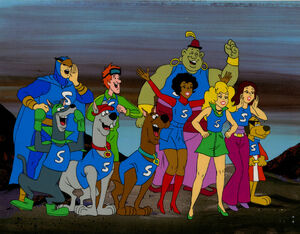 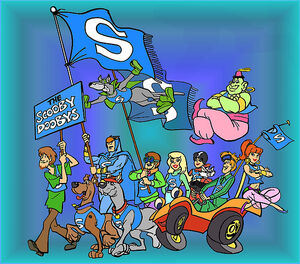 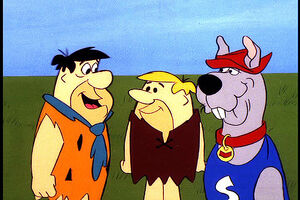 Fred Flintstone and Barney Rubble helping Scooby-Dum in the Laff-a-Lympics.