NOTE: This article is about the incarnation of Scorpion from the film, Mortal Kombat Legends: Scorpion's Revenge. The mainstream version can be found here:Scorpion (Mortal Kombat).

Grandmaster of the Shirai Ryu

Looking after his family.

Spending time with Raiden.
Getting revenge on those who wronged him.

Protect his son from the Lin Kuei (failed).

Hanzo Hasashi, better known as Scorpion, is the titular main protagonist of the 2020 animated movie Mortal Kombat Legends: Scorpion's Revenge. He was once the grandmaster of the Shirai Ryu clan until the entire clan and his family were killed by "Sub-Zero" and the Lin Kuei clan and now seeks revenge for their murder. He is also the minion turned archenemy of Quan Chi.

He was voiced by Patrick Seitz, who also played Jiren in Dragon Ball Super.

Hanzo Hasashi is first seen in the movie playing with and talking with his son Satoshi near an anthill. When there head home they realize the entire clan is missing only to be ambushed by members of the Lin Kuei clan so they escape. While looking around Hanzo discovers the entire clan is dead, including his wife. They are then ambushed by members from the Lin Kuei, and so Hanzo fends them off, killing several in the process. Eventually, Sub-Zero (actually Quan Chi in disguise) appears threatening Hanzo to gets down or Satoshi dies, he complies but "Sub-Zero" murders Satoshi anyway then murders Hanzo by impaling him on ice. He is then resurrected in the Neatherrealm as is being tortured by the demon Moloch.

Hanzo is able to escape and fights his way through several demons and eventually reaches Quan Chi, demanding to speak with him. Scorpion at first tries to kill Quan Chi, but Quan Chi uses his powers by manipulating Hanzo's body and twisting it in all sorts of painful ways. Quan Chi then makes Hanzo an offers to enter the tournament to exact his revenge on Sub-Zero. Hanzo agrees, now dubbing himself "Scorpion". After arriving at the tournament Scorpion first attempts to steal Shinnok's amulet. But then Raiden appears and attempts to persuade Scorpion to not steal the amulet telling. Scorpion tells him he has no choice but to serve Quan Chi but Raiden says that he always had a choice convincing Scorpion to stop.

Scorpion continues participating in the tournament and even helps out the Heroes in fending of Kano's goons. Until he runs into Sub-Zero, Sub-Zero not knowing what's going on tries to walk away but an enraged Scorpion tackles him off a bridge into a spike pit, impaling them both and killing Sub-Zero. After that Quan Chi appears and tells Scorpion that he was the person really responsible for the massacre of his clan and family and that Sub-Zero had no part in it. This Enrages Scorpion more and he removes himself from the spike and plans to exact his revenge. He is last seen after Liu Kang is nearly defeated by Goro but Scorpion kills Goro with his kunai and saves him.

Shang Tsung attempts to have Scorpion fight Liu Kang, but Scorpion takes Shang Tsung hostage and willingly forfeits his status as a fighter, securing Liu Kang's position as the victor of the tournament. After Shang Tsung retreats to Outworld, the island begins to collapse, Quan Chi is then freed from Shang Tsung tries getting Scorpion to give him Shinnok's amulet, but now that Scorpion knows what he did, he refuses. The two then engage in a fight in which after a long intense battle, Scorpion is being able to win and kills Quan Chi, finally avenging Satoshi, Harumi and the Shirai Ryu. He stays on the island content with dying to joined his family.

Scorpion started off the movie as a kind man who takes cared about his family. But after the death of the Shirai Ryu clan and Quan Chi's manipulations he becomes a much more vengeful and merciless fighting who wants nothing more than to kill Sub-Zero as revenge for revenge and later Quan Chi once he discovers he was behind the death of his family and clan. 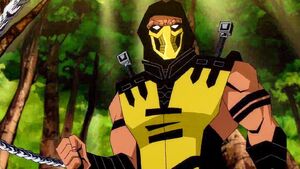 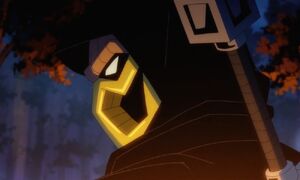 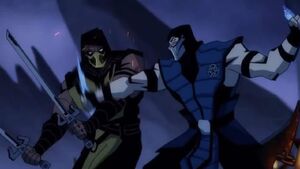 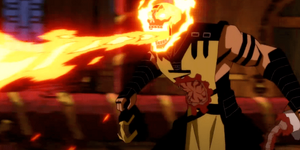 Retrieved from "https://hero.fandom.com/wiki/Scorpion_(Mortal_Kombat_Legends:_Scorpion%27s_Revenge)?oldid=2116746"
Community content is available under CC-BY-SA unless otherwise noted.